What To Watch June 20th To Take Away The Blues 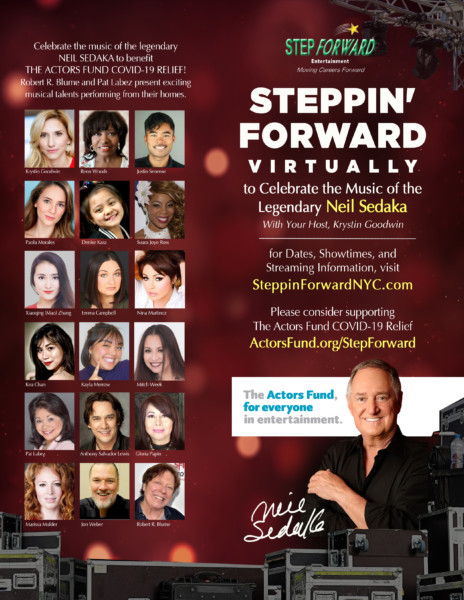 What To Watch June 20th To Take Away The Blues

6pm: Melissa Errico joins the award-winning show Living the Classical Life as the first distinguished non-classical guest in the series. The episode features her in conversation with her father, Dr. Michael Errico, a surgeon and still performing classical pianist. Recorded before the quarantine which has separated them from making music together as they have done since she was a child, Melissa performs the last song of the late French legend Michel Legrand, and Sondheim’s “Not While I’m Around” – accompanied by her Dad – for the cameras. She also discusses the classical roots of her musical passions and the music she sings, her love of art, growing older within a demanding industry, being a mother and the balance of life.

The virtual concert, free of charge, donations can be made to benefit The Actors Fund. The show will be streamed on broadwayworld.com, T2Conline.com YouTube and Facebook Live. The show also plays on Sunday, June 21st at 7pm EDT, 4pm PDT and repeated on Thursday, June 25th at 10pm EDT, 7pm PDT

7pm: Magis Theatre Company presents Thornton Wilder’s rarely produced play “The Alcestiad, with a satyr play The Drunken Sisters In honor of its original opening night,  Magis Theatre will host a Solstice launch party event entitled “The Healing Sun,” for its new interactive website (www.Alcestiad.com) that focuses on this timely and powerful play. It will feature interviews with the cast, dramaturgical material about Wilder’s play, letters from Thornton Wilder during the writing of the Alcestiad, and a walking tour of Four Freedoms Park, the outdoor venue on Roosevelt Island in New York City where the event will be held next June.

7:05 pm: Songs for Our City, a songwriting challenge commissioning new original music from Broadway actors and composers in response to the current COVID-19 crisis, in order to both support artists during this time and provide a unique and interactive way for audiences to enjoy new music while in-person events are on pause. Tonight Leslie Becker, Drew Gasparini, Will Taylor, Will Van Dyke & Jeff Talbott and Joel Waggoner.

7:30pm: Philip Glass’s Akhnaten Philip Glass’s mesmerizing masterpiece of ancient Egypt—in an ingenious production by Phelim McDermott that incorporates a virtuosic troupe of jugglers and acrobats—is unlike anything else ever seen on the Met stage and proved a sold-out sensation in its Met premiere last season. A portrait of the revolutionary title pharaoh, whose attempt to convert his society to the monotheistic worship of the sun leads to his overthrow, Glass’s opera takes a ritualistic approach to depicting the events, hypnotizing the listener with its repetitive yet immersive music.

8pm: The Marvelous Wonderettes: Dream On  It’s 1969, and The Marvelous Wonderettes are back at Springfield High (Go Chipmunks!) to throw a retirement party for their favorite homeroom teacher. As the girls sing their way through the greatest girl-group hits of the ’60s and bid Ms. McPherson a fond farewell, one of the Wonderettes reveals she’ll also be saying goodbye to search for success and happiness on her own. Act II finds the girls back together as the class of 1958 celebrates their 20-year reunion. The classic pop and rock hits of the ’70s provide the perfect soundtrack for these old friends to catch up on the places life has led them, all performed with their own marvelous. Written and created by Roger Bean. Presented by special arrangement with Stage Rights (www.stagerights.com)

8pm: Rule of 7×7: Pride Edition By The Tank on ongoing series at The Tank that premieres 7 brand-new 10-minute plays by 7 different writers. For each show, every playwright comes up with one rule, then the 7 playwrights create new plays using all 7 rules. Now, it’s time for a special Pride edition! 7 LGBTQIA+ writers, 7 rules, 7 short plays featuring LGBTQIA+ casts. Must RSVP.