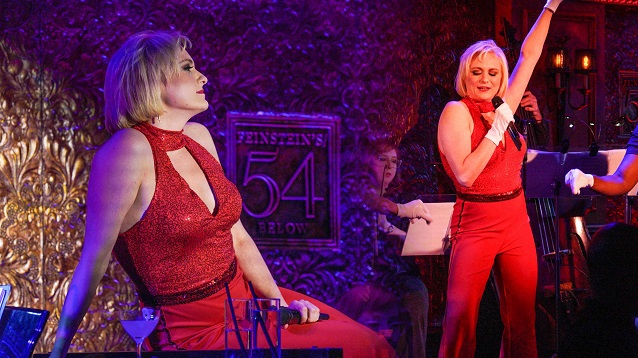 12:30pm: Mayo Performing Arts Center – MPAC is celebrating the end of our virtual concert series with one last concert by Annie Minogue Band.

5pm: Julie Halston: Virtual Halston Broadway actress/comedienne Julie Halston is coming to a laptop near you! After ranting and raving on stages and cocktail parties, the comedy queen will launch “Virtual Halston,” a weekly half-hour gab-fest spotlighting her famous friends. This week Judy Gold visits.

5pm: The Rally – NYC Pride LGBTQIA, the Pride, community activists, organizers, politicians and more for virtual Rally. Hosted by trans journalist Ashlee Marie Preston and trans actor Brian Michael Smith, join the community as we rally together to take a stand against police brutality and discrimination and make your voice heard in this re-imagined Rally experience.

5pm: Rattlestick Playwrights Theater and New York Theatre Salon present Global Forms Theater Festival On The Table. Food is central to all of our cultures. A stop motion animation/podcast of our favorite recipes, and just a taste of our cultural background. Featuring artist Riw Rakkulchon, special thanks (Luiza Reis, Chrysi Sylaidi, Sarah Bitar)

7pm: The Men From The Boys In celebration of Pride, Playbill and Pride Plays will presents the final play by playwright Mart Crowley, who passed away in March. Men From the Boys will be directed by Zachary Quinto and stars Denis O’Hare as Michael, Rick Elice as Donald, Mario Cantone as Emory, Joseph James O’Neil as Hank, Kevyn Morrow as Bernard, and Lou Liberatore as Harold. For the new arrivals: Carson McCalley plays Scott, Charlie Carver plays Jason, and Telly Leung plays Rick.

7pm: Flushing Town Hall to Present a VirtualCrossCurrent Choreographic Festival  The two-part dance festival will stream live as part of its new series of virtual programming, FTH at Home!

7:30pm: Donizetti’s L’Elisir d’Amore As intoxicating as the cheap wine passed off by a traveling huckster as the potent love potion of the title, Donizetti’s delightful comedy enchants the audience with slapstick humor and its charming lead couple: a hapless but big-hearted peasant and the clever, kind landowner he loves. It also doesn’t hurt that the score is an endless parade of spectacular ensemble numbers and show-stopping arias—like the beloved “Una furtiva lagrima,” one of opera’s ultimate tenor showcases.

7:30: The Last Five Years a brand new lockdown version of Jason Robert Brown’s The Last Five Years. The show will be streamed out internationally and is hosted by The Other Palace and produced by Lambert Jackson. Starring Lauren Samuels (Bend it Like Beckham, Over The Rainbow) who is also making her directing debut, acting opposite Danny Becker (The Prince of Egypt, Aladdin). They will record their performances entirely in isolation.

7:30pm: McCarter@HOME: In Conversation With Lucy Simon American composer for the theatre and of popular song, Lucy Simon (Carly & Lucy Simon Sing Songs for Children, Broadway’s The Secret Garden, and Dr. Zhivago), joins McCarter’s Artistic Director and Resident Playwright Emily Mann for a moderated conversation about their newfound friendship and collaboration on a brand new musical for the theatre based upon Ken Haruf’s novel Our Souls at Night. Must register.

8pm: Haley Swindal’s “Sing Happy: The Songs of Liza Minnelli” from her concert at 54 Below. Haley puts her brassy stamp on the greatest songs ever sung by Liza Minnelli. Directed by award-winning director Will Nunziata, songs include “Maybe This Time,” “Teach Me Tonight,” “Cabaret,” “Losing My Mind,” “Stepping Out,” and more

8pm: On Seth Rudetsky fabulous series Stars in the House. Marlo Thomas & Friends in Free To Be You and Me……Special. At 9:30pm: International Thespian Excellence Awards Showcase

8pm: How to Survive the End of the World By The Tank a short web-musical that has been written, rehearsed, produced and shot in its entirety since quarantine began in March. Starring Hannah Cruz, Dylan Hartwell, Greg Sullivan and Ellen Winter, with a script and lyrics by EllaRose Chary, music, lyrics and audio/video production by Brandon James Gwinn, and production management by Adrianna Lombardi.

8pm: East Side Stories: Inside Edition at Metropolitan Playhouse. All New Plays Celebrating the Life and Lore of the Lower East Side
Online readings, Week Fourteen, of readings of four new one-act plays inspired by life and history in the East Village, via live stream video, with talkback to follow, on

8:30pm: Lied Live Online: Jason Michael Webb in Concert Broadway composer, lyricist, producer Jason Michael Webb is our very special guest on this week’s Lied Live Online! His career has taken him from stage to screen, as music director for Broadway shows including The Color Purple and music supervisor for movies including The Greatest Showman. In 2019, he received a special Tony Award for his arrangements in Choir Boy.

Suzanna BowlingDecember 1, 2022
Read More
Scroll for more
Tap
4th of July Will Last From the 29th Til The 4th
Blast From The Past: 2004 Ballfest Cheyenne Jackson