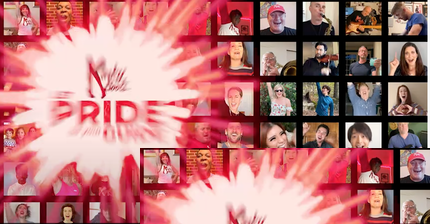 2pm: Brave New World Rep: Hamlet Director Tamilla Woodward brings Ezra Barnes as Claudius and Toree Alexandre as the melancholy Dane; advance reservations are required to watch it live, after which it will remain viewable on the BNW site for four days, starting at 6pm.

6pm: Broadway’s Best For Breast Cancer with Mandy Gonzalez and Javier Muñoz Mandy Gonzalez (Hamilton, Wicked, In the Heights) and Caroline Kohles, JCC Senior Director of Health and Wellness, for a special 5-week virtual series to celebrate life and foster learning. In this session we will learn how touch can move us towards pleasure and relaxation and away from pain. Learn helpful tips on how to touch either yourself or a loved one to reduce anxiety and fear and deal with treatment symptoms. Our special guests are Javier Muñoz, star of Broadway’s In the Heights and Hamilton and Ericka Clinton, licensed massage therapist and the head of the Swedish Institute, a college of health services. Dr. Alison Estabrook, a founding breast cancer specialist for BreastLink New York, will be available to offer up-to-date medical information and answer questions. Beneficial for everyone, but geared specifically to those living with or recovered from breast cancer.

7pm: Bad Daughter by Create Theater. Winner of the Kennedy Center’s Mark Twain Prize for Comic Playwriting, is a fast-paced romp to keep you laughing through dark times.

When Maddie’s father falls ill, she has to leave her secret life in Paris to return to the old family drama in New Jersey. But this is a comedy. If her family gets their way, it’s babka instead of baguettes forever. And that would be a tragedy.

7:15: Lambs’ Virtual Conversation Jim Brochu On Zoom meeting ID: 811 9132 6391, password: 06291874JB. Jim Brochu is the winner of the Drama Desk Award, the Helen Hayes Award, two LA Stage Ovation Awards, the Carbonell Award and the GLAAD Media Award for his work as an actor and playwright. He is currently seen on the CBS drama The Good Fight as Judge Vernon Windsor opposite Audra McDonald and Christine Baranski and as Dr. James Corden on Lorne Michael’s new Comedy Central series The Other Two. On Broadway, he has appeared as Andrew McLaren in Brigadoon opposite Christine Ebersole and Len Cariou, and as Mr. Brownlow in Oliver! opposite Brian Stokes Mitchell’s Fagin. In Washington, DC he played Willy Clark opposite Theodore Bikel’s Al Lewis in Neil Simon’s The Sunshine Boys. Recently he starred at New York’s fabled Palace Theatre in Broadway Backwards with Florence Henderson and Estelle Parsons as well as in the major Off-Broadway revivals of The Man Who Came To Dinner as Sheridan Whiteside opposite Tony winner Cady Huffman, and as Sir in the Anthony Newley-Leslie Bricusse musical, The Roar of the Greasepaint, The Smell of The Crowd. Over the past few years, Jim has been leading a double life – both as himself and as the great Zero Mostel in his multi-award winning play, Zero Hour.  Since its premiere in 2006 Jim has been touring the country with the show, racking up over 600 performances, garnering both unanimous critical raves and major theatrical honors. Legendary producer Hal Prince praised Jim’s performance as “Dazzling! The work of a great artist!” Many thanks to Magda Katz for getting Jim. Friend of The Lambs, Foster Hirsch, will conduct the interview, Q&A held to the end.

The Monday night event will feature a live fundraiser. All proceeds will go to the Ali Forney Center which is dedicated to helping and housing homeless LGBTQAI+ Youth.

Watts’ reprisal of Love Terrorists is the third online installment of Jams since the pandemic, preceded by The Jam: No More Silences (where Watts investigated his own silence while inspiring his audience to speak out against social injustices) and The Jam: The Next Time is Now(inspired by James Baldwin’s The Fire Next Time where Watts expressed the importance of educating oneself).

7:30: “A HOMELY SWAIN” WITH CHUCKWUDI IWUJI Celebrated Shakespearean Chukwudi Iwuji (Othello and Hamlet at The Public Theater) will join host Nathan Winkelstein, Red Bull’s Associate Producer, to discuss Henry VI, the man who would be ‘a Homely Swain’. Chuk tackled this role in all three plays of the Henry VI trilogy for the Royal Shakespeare Company in 2006 in productions helmed by Michael Boyd. Chuk will read a passage from the play and discuss his thoughts on text and character in Shakespeare. They’ll take questions through Facebook LIVE.

They will also be selecting a few individuals to appear as part of the broadcast. If you would like to ask a question and have the opportunity to appear, please submit this form by Monday, June 29 at 10:00 AM EDT.

7:30pm: Donizetti’s La Fille du Régiment One of the most ebullient works in the repertoire, Donizetti’s delightful comedy is the unlikely tale of a bright, headstrong young woman who has been raised among a French army regiment. When, much to the dismay of the doting but overprotective soldiers, Marie falls in love with the Tyrolean villager Tonio—a touchstone tenor role that overflows with both youthful ardor and ringing high notes—hilarity and virtuosic bel canto crossfire ensue.