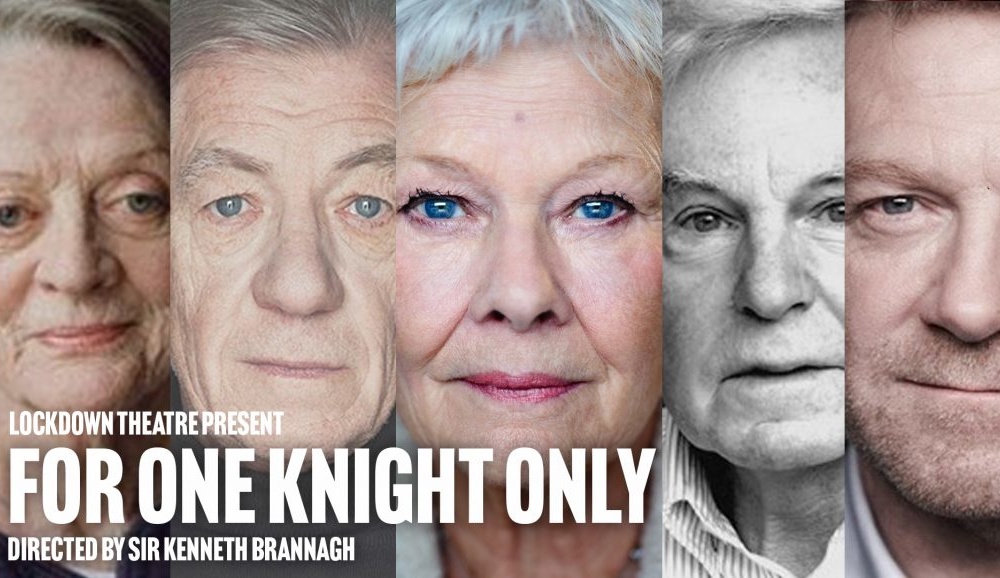 The Thompsons: Playing on Air. Ah, the holiday season! The wine is flowing. In-laws are gossiping in the kitchen. And the Thompson family is indulging in their most bizarre Thanksgiving ritual: the Turkey Trot. Mischievous and tender, The Thompsons by Andrew Massey (EST’s Youngblood) is a comedy about the families we love, break, and remake.

2pm: For One Knight Only an evening of conversation with British acting legends Dame Judi Dench, Sir Derek Jacobi, Sir Ian McKellen, and Dame Maggie Smith, will be presented on Zoom November 29 at 7 PM GMT.

Hosted by Sir Kenneth Branagh, the live Q&A will benefit the theatrical charity Acting for Others, which provides emotional and financial support to theatre workers in times of need through its 14 member charities. This is the latest event from Lockdown Theatre, a quarantine initiative set up to present live table reads with all-star casts, raising money for the organization.

There will be opportunities for audience members to participate throughout the event.

Colin Donnell is known for his work on Broadway including roles in Violet, Anything Goes, which garnered him Drama Desk, Outer Critics and Astaire noms, and Jersey Boys. He has also been seen elsewhere in NYC in Follies, Merrily We Roll Along, Lady Be Good at the New York City Center and Loves Labours Lost in The Public’s Shakespeare in the Park alongside his now wife Patti Murin. He is known on screen for his work as Dr. Connor Rhodes in NBC’s drama Chicago Med. Donnell can also be seen as Tommy Merlyn in CW’s Arrow. Other appearances include Scott Lockhart in Showtime’s hit series The Affair, Pan Am, Person of Interest and The Mysteries of Laura. His films include Every Secret Thing, which also starred Diane Lane and Elizabeth Banks and this past summer’s release Almost Love.

7:30pm: Verdi’s Simon Boccanegra Starring Kiri Te Kanawa, Plácido Domingo, Vladimir Chernov, and Robert Lloyd, conducted by James Levine. From January 26, 1995. The title ruler of Simon Boccanegra is one of the repertory’s most compelling characters, a 14th-century Doge of Genoa, beset on all sides, juggling political adversaries bent on murder with his love for his long-lost daughter Amelia. In addition to Boccanegra’s searing internal conflict between public duty and private grief, the story offers cloak-and-dagger intrigue, passionate young love, and noble sacrifice—set to an unfailingly dramatic, enveloping score that only Verdi could have created.