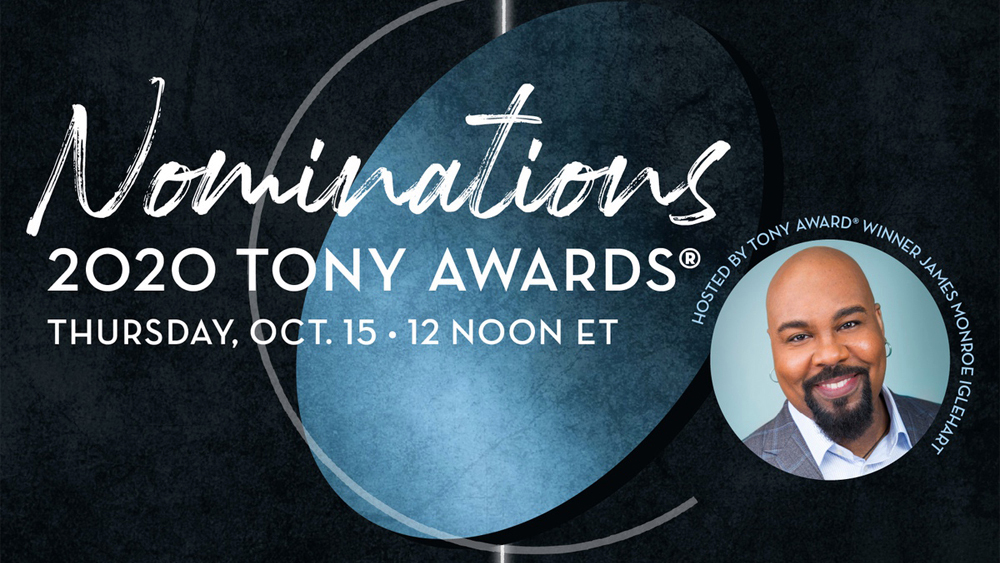 8am: Waiting For The Host, Pangdemonium Available through November 1. Live from Singapore, play by Marc Palmieri depicts an unorthodox union of unusual suspects congregateing online, on Zoom, on a mission to stage a play.

The Nominating Committee will convene October 13 to vote on the nominations. The Broadway League and American Theatre Wing—co-presenters of the awards—determined that productions that had opened on or before February 19 will be considered eligible. (Some shows had begun previews or opened between that date and March 12, the start of the Broadway shutdown, though nominators or voters may not have seen them in time to make determinations.)

7pm: Give Me Your Hand By Irish Repertory Theatre In this special engagement, two of Ireland’s finest actors, Dearbhla Molloy and Dermot Crowley, take audiences on a virtual stroll through London’s National Gallery, discovering afresh the Museum’s masterpieces from Van Gogh and Van Eyck, to Rubens and Gainsborough. With humor and grace, Crowley and Molloy breathe fresh life into each painting’s subjects with poetic stories from renowned Irish poet Paul Durcan.

7pm: That Kindness: Nurses in their Own Words Brooklyn Academy of Music. A new virtual play created by V (formerly known as Eve Ensler),
honoring nurses’ selfless act of service and revealing testimonies from
the front lines of the Covid 19 pandemic. Featuring performances by Ed Blunt, Connie Britton, Rosario Dawson, Stephanie Hsu, LaChanze, Liz Mikel, Rosie O’Donnell, Billy Porter, Dale Soules, Marisa Tomei, and Monique Wilson, with original music by Morley and company. This will be simultaneously presented by theaters across the country

7:30pm: Far Away PTP/NYC Caryl Churchill’s 2000 play depicts a few fearful characters going about their business (mostly hat making) in a dystopian society whose horrors are only glimpsed.

7:30pm: Donizetti’s Anna Bolena Donizetti crafted his three dazzling “queen” operas, a trilogy chronicling the courtly conspiracies of the 16th-century Tudor monarchs, over a seven-year burst of creativity. The three are rarely performed all in a row, or even in the same season, so taxing is the intricate vocal writing, although there have been a few notable and ambitious exceptions. The intrepid soprano who tackles the lengthy first installment about Anne Boleyn, second wife of the matrimonially prolific Henry VIII, joins a cast of infamous history-book characters revived for the operatic stage.