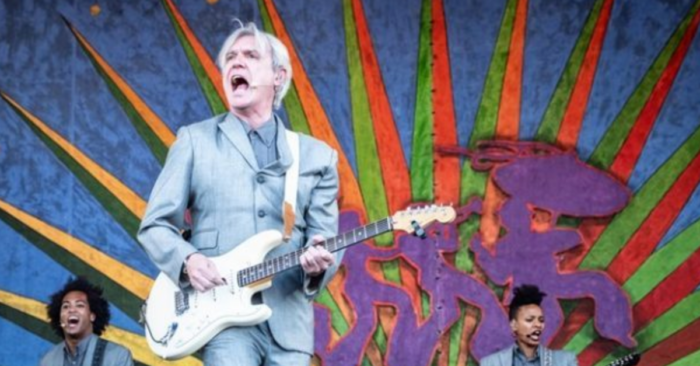 Presented by Ahava Theatre Company and conceived by Tagliaferro, the concert will premiere on YouTube and remain available to watch through October 20. While free to enjoy, donations to support International Sanctuary are encouraged.

2pm: Broadway for Biden’s Town Hall: People with Disabilities Voices Broadway for Biden’s fourth Town Hall event, produced by the Broadway Podcast Network, will stream online October 10 at 2:00pm EST. Christine Bruno (Public Servant), Sofiya Cheyenne (Loudermilk), Gardiner Comfort (The Elephant in Every Room I Enter), Ryan Haddad (Hi, Are You Single?), and Alexandria Wailes (For Colored Girls Who Have Considered Suicide When the Rainbow Is Enuf) will join a discussion about the Biden campaign’s policies for People with Disabilities, moderated by Jay O. Sanders (Girl from The North Country). Candace Broeker Penn and Lynnette Taylor will serve as ASL interpreters for the event.

3pm and 8pm: Give Me Your Hand By Irish Repertory Theatre In this special engagement, two of Ireland’s finest actors, Dearbhla Molloy and Dermot Crowley, take audiences on a virtual stroll through London’s National Gallery, discovering afresh the Museum’s masterpieces from Van Gogh and Van Eyck, to Rubens and Gainsborough. With humor and grace, Crowley and Molloy breathe fresh life into each painting’s subjects with poetic stories from renowned Irish poet Paul Durcan.

6pm: Theater of War: Antigone in Ferguson Antigone in Ferguson is a groundbreaking project that fuses dramatic readings by acclaimed actors of Sophocles’ Antigone with live choral music performed by a diverse choir, from St. Louis, Missouri and New York City culminating in powerful, healing discussions about racialized violence, police brutality, systemic oppression, gender-based violence, health inequality, and social justice. The project was conceived in the wake of Michael Brown’s death in 2014, through a collaboration between Theater of War Productions and community members from Ferguson, MO, and premiered at Normandy High School, Michael Brown’s alma mater, in September of 2016, and has since toured the country and the world.

In light of the uprising and protests catalyzed by the killings of Ahmaud Arbery, Breonna Taylor, George Floyd, Tony McDade, Dion Johnson, and many others; and the disproportionate impact of the COVID-19 pandemic on black and brown communities, Antigone in Ferguson aims to generate dialogue, consciousness, compassion, outrage, understanding, and positive action at this critical moment. This special presentation of Antigone in Ferguson on Zoom will foreground the perspectives of people in Baltimore, Maryland whose lives have been impacted by police brutality, community violence, and the COVID-19 pandemic.

7:30: Music at the Mansion: KT Sullivan We’ll Meet Again KT Sullivan, artistic director of The Mabel Mercer Foundation, on October 17 ( a time when the world of cabaret is usually gathering for the cabaret convention) will be performing a show on the porch at The Mansion in hopes that “We’ll Meet Again” in the night clubs, concert halls, and “all the old familiar places” in the not too distant future. Among the songs she’ll be singing are “ Autumn In New York”, “Once In a Blue Moon”, “Don’t Fence Me In”, “There’s No Business Like Show Business”, “Thanks For the Memory”, “I’ll Be Seeing You”, and of course, “We’ll Meet Again”.

KT Sullivan most recently co-starred with Steve Ross in the sold our run of “Love, Noel” by Barry Day at the Irish Repertory Theatre. She starred in the Broadway revival of GENTLEMEN PREFER BLONDES and headlined for a decade in The Oak Room of The Algonquin Hotel. One of the shows she created there, “Rhyme, Women, and Song” was presented on PBS ‘WNET-13 and her award-winning Sondheim show with Jeff Harnar was filmed for PBS at the New Jersey Performing Arts Center. She stars annually at the Pheasantry in London, and was twice named one of the TOP 100 Irish Americans by Irish America Magazine. On that note, she is proud to be married to Steve Downey, president emeritus of The New York Browning Society. www.ktsullivan.com

7:30pm: Immersive Virtual Dance Performance Event ‘Inside/Out’ By The PGK Dance Project an immersive virtual dance performance. With INSIDE/OUT, The PGK Dance Project welcomes audiences to join from the comfort and safety of home. Together, audiences (along with Peter and PGK Company members) will begin the evening with a fun, interactive “ice breaker” via Zoom. Next, audiences will enjoy a performance of Ollin (choreographed by Kymberly Kellems Fulton) and PERSPECTIVES, a new work by PGK Artistic Director Peter G. Kalivas. Both dance performances will be pre-produced as immersive dances for film, with sound scoring and video by The David’s Harp Foundation. The cinematographer will be Maximos Koukos.

7:30: Donizetti’s Roberto Devereux In 2015–16, soprano Sondra Radvanovsky pulled off a rare feat: tackling all three of Donizetti’s Tudor queens over the course of one season. The payoff was immense, as it gave opera-goers a chance to experience the subtle trajectory of his character portraits—from the tragedy of circumstance facing the young Anne Boleyn to the touching inner turmoil of an aging Elizabeth I as she worked through her feelings for Robert Devereux, a much younger nobleman charged with treason, in the final opera of the trilogy.

8pm: Isn’t it Romantic Playbill.com The second of three plays by Wendy Wasserstein honoring what would have been her 70th birthday, to benefit TDF’s Wendy Wasserstein Project, which brings high school students to theater. In this play, Janie Blumberg and her WASP friend, Harriet Cornwall, have graduated college and are ready to take on the world. But their post-college careers and personal lives are fraught with more problems than prosperity. Both struggle to escape lingering parental domination and to establish their own lives and identities in Manhattan in the early ’80s.

8pm: Rule of 7×7: October Edition By The Tank RULE OF is an ongoing series that premieres 7 brand-new 10 minute plays by 7 different writers. For each show, every playwright comes up with one rule, then the 7 playwrights create new plays using all 7 rules. Hosted and produced by Brett Epstein.

RSVP is required to attend Virtual 7×7.

9pm: The Present: A Grand Finale By Geffen Playhouse Join in the finale for The Present, a new online interactive performance by illusionist and storyteller Helder Guimarães (Invisible Tango, Verso).

The Present is inspired by Guimarães’ own life experience with quarantine during childhood. Weaving storytelling and his signature illusions, Guimarães leads the audience through a funny and moving story of lessons he learned when he least expected it.

9pm: Sex and Consequences by Isabella Rossellini Sex and Consequences is a 40-minute comical, absurd, and scientifically accurate show on biodiversity and the multiple ways animals reproduce. The show, created by Rossellini with the support of Paul Magid, is a way to re-create the theatrical experience from home. The engine for this creative attempt is to satisfy the very human wish to be together and laugh, even during these challenging circumstances.

9pm: From TheatreWorks with Love: A Party with Bond…Tim Bond By TheatreWorks He may not drive an Aston Martin or work for British Secret Service, but Artistic Director Tim Bond knows a good adventure when he sees one.

This Fall, TheatreWorks Silicon Valley has a license to thrill with its first-ever virtual celebration From TheatreWorks with Love: A Party with Bond… Tim Bond. The event will allow the company’s fans and supporters to celebrate with Bond as he begins his tenure at the Tony Award-winning theatre company.

No high-tech gadgets or secret rendezvous are necessary to enjoy the unique, socially distanced festivities—guests can participate online via micro-parties of up to six from the comfort of home.