What To Watch October 4th To Take Away The Blues 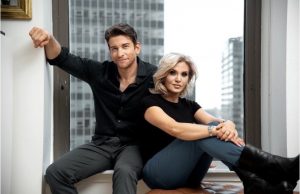 What To Watch October 4th To Take Away The Blues

3pm: Lorna Luft: Lost & Found I don’t know about you but once the pandemic began I started cleaning…my closets…my mind…and eventually my vault of music.

You wouldn’t believe the things I found gathering dust in the vault. Songs I haven’t sung in decades, all the way through to what I thought was lost to history. Songs like Make Someone Happy and my 1973 single for Epic records Our Day Will Come.

So many memories. So many stories.

Join me on Zoom as I reminisce on these found treasures: the music, the stories, and the lessons learned with the hindsight of a lifetime in entertainment.

McDaniel serenades audiences and shares stories from his life and career on Broadway, concert tours, and his days as Rosie O’Donnell’s band leader on The Rosie O’Donnell Show. He has previously collaborated with artists such as Carol Burnett, Cab Calloway, Kristin Chenoweth, Paul Newman, Madonna, Patti LuPone, and Bette Midler. Be sure to join him for Sunday Tea!

Eleanor brings to life Eleanor Roosevelt, the most influential First Lady the world has ever seen. From her “Ugly Duckling” upbringing to her unorthodox marriage to Franklin, Eleanor puts her controversial life, loves and passions on the stage. Starring Tony Award-winner Harriet Harris (BSC: The Royal Family of Broadway, Sweeney Todd; Netflix’s Ratched)

7:30: Mozart’s Idomeneo In this work, which made the young composer’s name and started him on the path to immortality, Mozart took the then-dusty genre of opera seria—with its focus on acrobatic feats of singing and plots taken from Classical history or mythology—and gave it new life. Set in ancient Crete, Idomeneo follows the machinations of various members of the ruling family and two foreign princesses, and still delivers plenty of vocal pyrotechnics. But it’s the addition of Mozart’s unmistakable elegance and keen sense of characterization that turns the opera into a musical and dramatic tour de force.

8pm: A Land Without Weather Guild Hall A reading by some dozen actors of stories from playwright Dipti Bramhandkar about life under quarantine based on interviews with residents of New York City and of the East End of Long Island.