What To Watch October 5th To Take Away The Blues 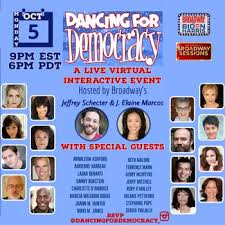 What To Watch October 5th To Take Away The Blues

1pm: Kids and Yiddish: The Reunion Special By National Yiddish Theatre Folksbiene. “Welcome to Our Suke/Sukkah”, a four-day festival of family-friendly performances during Chol Hamoed (the intermediary days of Sukkos) from October 5th to 8th. The presentations include Kids and Yiddish: The Reunion Special (October 5th); Tatiana Wechsler Concert (October 6th); Budd Mishkin’s interview with the Grammy Award-winning Klezmatics; and, Bisl Borscht: A Tribute to Mickey Katz, starring Ben Liebert (Motl from Folksbiene’s Fiddler on the Roof in Yiddish) (October 8th) with Special Guests.

The National Yiddish Theatre Folksbiene presents Kids and Yiddish: The Reunion Special. The beloved family show returns in an online production featuring original Off-Broadway cast members as well as new voices.  This can be viewed only through October 9th at 1:00 PM Eastern Time.

7pm: Juilliard Virtual Gala Juilliard will present a virtual gala. The event will feature performances and appearances by such alums as Philip Glass, Nico Muhly, and Lorraine Toussaint, as well as highlights of past events, including a February 2020 master class led by Renée Fleming, the Juilliard Orchestra virtual performance of “Nimrod” from Elgar’s Enigma Variations conducted by Itzhak Perlman, and a behind-the-scenes look at Larry Keigwin and Nicole Wolcott’s collaboration Bolero Juilliard.

7pm: Working Theater: American Dreams. American Dreams invites YOU to participate in the newest game show sensation – where you, the audience, decide who wins the ultimate prize: citizenship to “the greatest nation on earth.” Redefining online theater, this is a participatory performance which changes every night.

American Dreams captivates you, while simultaneously exploring how we navigate between fear, security, and freedom; who and what we choose to believe—and how those choices come to shape who we are as citizens, and as a nation.

American Dreams premiered to great acclaim at Cleveland Public Theatre for live audiences. This fall, the show launches as a national virtual theater production. This ground-breaking online tour will “travel” across the U.S., inviting audiences into playful, timely engagement and dialogue around what it means to be a citizen of this country.

Page performed Iago opposite Avery Brooks in 2005 at The Shakespeare Theatre Company under the direction of Michael Kahn. He’ll read passages from the play and discuss his approach to the text and character. They’ll take your questions through Facebook LIVE and YouTube.

7:30: Wagner’s Wagner’s Tristan und Isolde Met audiences were fascinated by Mariusz Treliński’s gripping, visionary production of Wagner’s epic opera. In the daunting title roles of the doomed lovers, Nina Stemme and Stuart Skelton are passionate, overwhelming, and heartbreaking as they battle every obstacle that separates them from their true destiny. René Pape is King Marke, betrayed not only by Isolde but by Tristan, the man he most trusts and loves like a son. With Ekaterina Gubanova as Isolde’s confidante Brangäne and Evgeny Nikitin as Kurwenal, Tristan’s loyal lieutenant. Simon Rattle conducts a surging, shimmering account of Wagner’s monumental score.

The event, hosted by Schecter and fellow Broadway alum, J. Elaine Marcos, will feature performances and testimonials by some of Broadway and Hollywood’s most popular performers.

Click here to sign up. While free to enjoy, donations are encouraged to support Biden’s election campaign.

Ask Bob Blume – Column 49 – Are You Prepared For The Current TV Pilot/Episodic Season?