What To Watch October 7th To Take Away The Blues 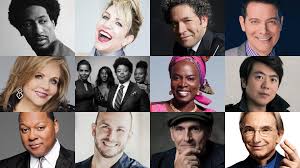 What To Watch October 7th To Take Away The Blues

1pm: Maria Dizzia “Never Any More Perfection Than There is Now” By New York Theatre Workshop join for a masterclass with Maria Dizzia (national tour of Heidi Schreck’s What the Constitution Means to Me, Belleville, In the Next Room). In this acting class, the stage and screen star will explore encountering the script for the first time.

This class is asking for participants to work with the teacher during the virtual class. If you would like to participate by performing on screen for those tuning in, please register via Zoom and volunteers will be selected at random. Selected participants will be notified in advance of the class.

2pm: Exploring Othello in 2020 By Red Bull Theater Over the course of four Wednesday afternoons, Red Bull Theater will bring together a group of BIPOC theater artists to read and discuss Shakespeare’s Othello with celebrated Shakespeare scholar, Ayanna Thompson.

7pm: Paula Vogels Bard at the Gate Origin Story Dan LeFranc’s play is set in the town of Nowheresville as two teenagers set out to solve a crime with the only clues provided by an eponymously titled comic book, illustrated by the mysterious Pronoun. Stars Anula Navlekar, Brandon E. Burton, Edmund Donovan, and Zoe Mann.

7pm: HERE: us US blends highly athletic, sensual and dynamic movement with song, text and a layered soundscape to create a deeply personal commentary on the state of the union. This hybrid work explores issues of humanity and morality and examines the relationship between a country and its citizens. A series of cinematically woven duets with inanimate objects suggests dialogue with those who might not otherwise have a voice. By employing literal and metaphorical devices, choreographer/performer Alexandra Beller takes “us” along on her quest to build a healthy relationship with her country.

Salem: Book, music, and lyrics by Kira Stone. Directed by Sarna Lapine
Featuring Antonio Cipriano and Kira Stone. In Salem, Susannah, Bridget, Miriam, Martha, Rebecca, and Mary are held hostage in a modern day courtroom for their collective trial by judge and jury. We marvel at the mass hysteria, we deliberate, and we ultimately are a part of deciding the fate of these six women.

Shapeshifters: A Queer Comic Book Musical. Music and words by Truth Bachman. Direction and development by Zhailon Levingston. Featuring Truth Bachman and Basit Shittu. High school bully and comic book genius, Mel, discovers a hidden plane of existence called Queer Time, simply by drawing scenarios with pen and paper. In Queer Time, Mel joins the ranks of an underground network of Queer and Trans superheroes called The Shapeshifters. As Mel and the Shapeshifters sprint toward uncertain futures, this tribe of queer heroes must rely on community to persist, resist, and survive their living nightmares.

The celebration, directed by Emmy Award-winner Habib Azar, is offered free to the general public. Music lovers can watch this complimentary presentation on carnegiehall.org as well as Carnegie Hall’s YouTube channel and Facebook page.

7:30pm: Wagner’s Das Rheingold Like many of his German Romantic contemporaries, Wagner found great inspiration in Scandinavian mythology, whose stubborn and intemperate gods and goddesses stirred up enough drama to fuel many hours at the opera. His magnificent four-part series Der Ring des Nibelungen, is an epic tale modeled on the ancient Norse sagas. In this first installment, Wagner introduces the lustful and conniving dwarf Alberich, who steals a hunk of gold from the Rhinemaidens, forging from it an all-powerful ring and setting into motion a series of events that will leave the world—and its roster of gods, goddesses, demigods, giants, and mortals—forever changed.

8pm: All Arts: Under the Greenwood Tree A new documentary Under the Greenwood Tree debuts on All Arts. The film follows Public Work’s 2017 musical production of As You Like It and its planned remounting in 2020, which was canceled due to the pandemic. The Bard’s comedy was co-adapted by Shaina Taub and Laurie Woolery, with music and lyrics by Taub, choreography by Sonya Tayeh, and direction by Woolery.

8pm: The International Voices Project Playwright: Pipsa Lonka. Translator: Kristian London. Director: Breahan Pautsch. In collaboration with Akvavit Theatre. Second Nature (Den andra naturen) is a play about getting used to living, the ethical choices that are hidden in our everyday lives and the moments in life that shake up our habitual behaviour. The play contemplates our mortality, that we share with all the other living beings.