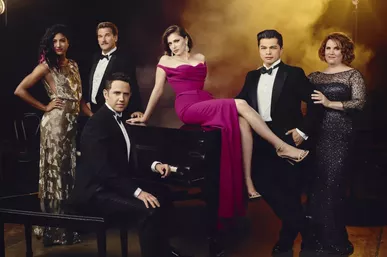 12pm: Theater of War for front-line medical providers Theater of War Productions Dramatic readings of Sophocles’ Philoctetes and Women of Trachis as a catalyst for a discussion about the impact of Covid-19. Best-known for Antigone in Ferguson, the company founded by Bryan Doerries performs classical plays to prompt community discussions about urgent issues. This edition features performances by Amy Ryan, Marjolaine Goldsmith, Frankie Faison, and David Zayas.

2pm: Anyone Can Write A Song By Florida Studio Theatre Led by FST Cabaret Favorite and Blue Eyed Bettys co-founder Ben Mackel, this master class will empower you to express your feelings and stories in song. Basic structure and form will free that melody from your mind and maximize the emotional impact of your lyrics. Some musical proficiency and basic understanding of music theory recommended.

2:30pm: Faith Healer Old Vic Michael Sheen stars in Brian Friel’s play about a man who goes on the road trying to heal people, bringing along his wife Grace (Indira Varma) and manager Teddy (David Threlfall) Faith Healer is the third in the Old Vic: In Camera live streamed performances, and will be streamed live directly from the iconic Old Vic stage with the empty auditorium as a backdrop for five performances only.

6:30: The Moth: Close Encounters Join The Moth for a special virtual Mainstage livestreamed from the historic Green-Wood Cemetery. In a first-of-its-kind show for The Moth, attendees will watch from the comfort of their homes as four beloved Moth storytellers share true stories told live against the beautiful backdrop of Green-Wood Cemetery.

Martinez made his Broadway debut as Emilio Estefan in On Your Feet!. His additional credits include Unmasked at Paper Mill Playhouse, Mexican productions of Beauty and the Beast, Saturday Night Fever, The Drowsy Chaperone, and Sweet Charity, and NBC Universo’s El Vato.

7pm: Two River Rising Reading Series: Seven Homeless Mammoths Wander New England Playwright-in-residence, Madeleine George began her relationship with Two River nine years ago with the world premiere production of her play Seven Homeless Mammoths Wander New England, a deliciously smart and funny “academic sex comedy” about life in a small university town. In George’s play, Dean Wreen’s college is in dire financial straits, and a plan to close its on-campus natural history museum is sending unexpected shock waves in every direction—just as the Dean’s ex-girlfriend has come back into her life. This definitely complicates things with her much younger girlfriend, Andromeda. Neither budget cuts nor the shadows cast by seven about-to-be-homeless mammoths are any match for the sweet taste of romance in this hilarious and deeply moving play.

Love, Rosie
Music and lyrics by Zack Zadek, book by Peter Duchan
Based on the film Love, Rosie and novel Where Rainbows End
Featuring Zack Zadek
Two interconnected lives are tracked over the course of 30 years, asking the question: “What is a love story?”

Wonder Boy
Book, music, and lyrics by Jaime Jarrett
Featuring Joshuah Dominique and Sav Souza
When Jackson steals a mysterious drug from his genius twin sister, he transforms into Wonder Boy, a superhero with unparalleled strength, the ability to fly, and automatic self-healing powers. He must navigate his new identity as a superhero, as well as his identity as a transgender man.

7:30: Donizetti’s La Fille du Régiment One of the most ebullient works in the repertoire, Donizetti’s delightful comedy is the unlikely tale of a bright, headstrong young woman who has been raised among a French army regiment. When, much to the dismay of the doting but overprotective soldiers, Marie falls in love with the Tyrolean villager Tonio—a touchstone tenor role that overflows with both youthful ardor and ringing high notes—hilarity and virtuosic bel canto crossfire ensue.

8pm: “All Adventurous Women Do” Serbia International Voices Project
A play about the necessity of going elsewhere to fully realize one’s sexuality,