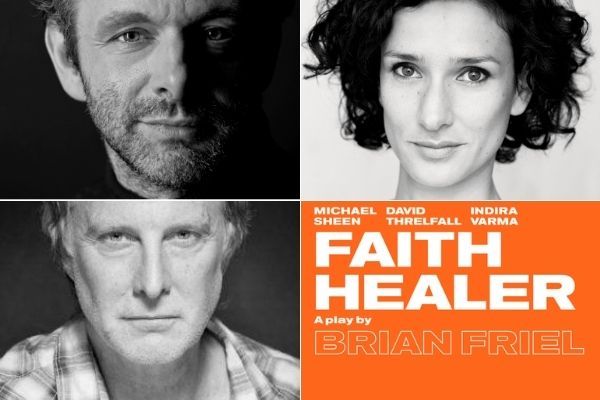 12pm on: Mile Square Theatre: Sitting and Talking by Lia Romeo. The series begins with Lia Romeo’s charming, deeply heartfelt play Sitting and Talking, which follows a man and woman in their 60s as they navigate the vulnerable, awkward, and sometimes hilarious path to companionship via online dating during quarantine. Film star Dan Lauria, who played the titular role in Broadway’s Lombardi, is joined by Emmy- and Golden Globe-nominated actress Wendie Malick, and the piece is directed by James Glossman. Produced in collaboration with Project Y.

1pm: StillHERE Online: Baba Israel and Grace Galu The HARP Artist duo that brought you Cannabis! A Theatrical Concert is going to be live on Friday with an update on creative developments and new work. By HERE Arts Center

2:30pm: Faith Healer Old Vic Michael Sheen stars in Brian Friel’s play about a man who goes on the road trying to heal people, bringing along his wife Grace (Indira Varma) and manager Teddy (David Threlfall) Faith Healer is the third in the Old Vic: In Camera live streamed performances, and will be streamed live directly from the iconic Old Vic stage with the empty auditorium as a backdrop for five performances only.

3pm: 60-Minute Special #14 Ovo, Bazzar, Alegria Embrace your inner-child with this week’s CirqueConnect 60-min special! This Friday, Sept. 18th at 3 pm E.T., we are inviting you to revisit some of the best moments from OVO, BAZZAR and the original version of Alegria.

Throughout the month of September, Urban Stages’ Play Fest & Fundraiser will bring virtual staged readings directly to you as well as post-show interviews conducted by Craig Horsley and special extended interviews by Sue Matsuki. These online events will be available for a limited time.

7:30: Bellini’s I Puritani  A saga of star-crossed love and family drama set against the strife of the 17th-century English Civil War, Bellini’s bel-canto gem is best known for its mad scene, one of the repertory’s most spectacular. Elvira, a young Puritan woman, is set to marry Arturo, a royalist. But when his duty to the crown comes between them, and Elvira finds herself abandoned on her wedding day, she descends into madness with a breathtaking outpouring of virtuosity that only this style of opera can deliver.

8pm: CyberTank: Rule of 7×7 RULE OF is an ongoing series that premieres 7 brand-new 10 minute plays by 7 different writers. For each show, every playwright comes up with one rule, then the 7 playwrights create new plays using all 7 rules. Hosted and produced by Brett Epstein.

8pm: City Garage: Exit the King A deluded king. A failing kingdom. Two squabbling queens vying for his attention. An obsequious doctor. A dim-witted but loyal guard and a mouthy servant. In a new translation by City Garage founders Frederique Michel and Charles Duncombe.

8pm: MTA’ s Playwrights Lab: In Absentia by Anisha Agarwal ’21. Ash and his little sister Raina struggle to cope with the new normal after their mother’s mental health deteriorates due to the death of their father. Although their family might be flawed, they know they have each other – until events begin to pull them apart.

8pm: Playbill Social Selects: A Chorus Crime (From Seize the Show) By Playbill. Broadway’s favorite time-traveling detective is once again on the case as Sydney Styles, gossip columnist and amateur sleuth, finds herself in the middle of another murder when a costume mistress is killed by a chorus girl—but which one? Now it’s up to you, Styles’ loyal assistant, to help her crack the case.

As you make your way through acting classes, voice lessons—and even the gym—you are given the chance to question each suspect. In addition, for each dance move, acting tip, and vocal scale you master, you will unlock even more information that will help you reveal the killer.

Molly is separated from her husband and in desperate need of a childcare provider. Then she discovers Juana standing at her doorstep. Soon, Molly and her kids are swept up into Juana’s magical and charming ways. But, who is Juana, really?

Kureichik’s 7-character play tells the story of the first month of the Belarusian revolution, its ups and downs on the eve of the inevitable democratization of the country after 26 years of dictatorship. All characters have real prototypes, in some you will recognize former and current leaders of the country, in others – incredible Belarusians who have gone out to battle the totalitarian machine, sometimes at the cost of their lives, their freedom, and their loved ones. They represent polar points of view in the awakened Belarusian society. Much of the dialogue is directly taken from actual speeches and statements. The author tells of the tragic escalation of violence and repression employed by the authorities to repress freedom-seeking Belarusians with bayonets and clubs, and expresses his hope that solidarity, truth and faith in human values will inevitably lead to victory over evil.