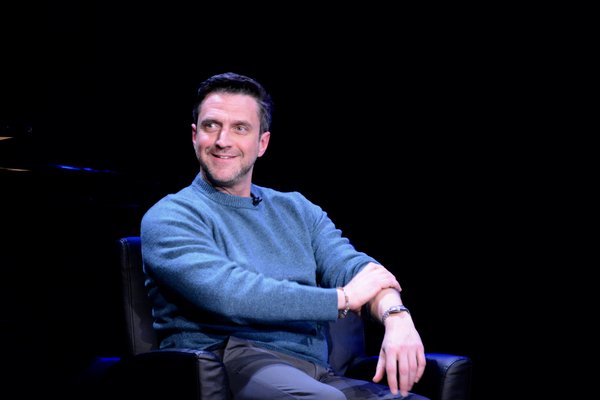 9am: Riverside Reads: The Last Broadcast Riverside Studios in London presents Riverside Reads on the first Tuesday of every month, the first reading of a first-class new play or musical, ready for commercial presentation.

After each reading there will be a live informal discussion with a chance for the audience to talk with the author, the actors and the director.

4pm: CyberTank Variety Show By The Tank, hosted by Hannah Erdheim The CyberTank Weekly Variety Show is a remote, multidisciplinary variety arts gathering open to everyone. The arts community has been presented with a challenge to re-examine theatricality, and The Tank has reframed this as the gift of an opportunity to grow and choose community over despair. Each weekly installment is centered around a specific question and features guest artists who will perform and facilitate conversation.

“Dear Liar” brings their epistolary relationship to life — revealing not only the ups and downs of their storied careers, but also illustrating the very stormy infatuation and magnetism that pulled these spirits together even through separation, hardship and heartbreak.

“Dear Liar” will be streamed via a private link sent to ticket buyers the day of the reading. Tickets are $35.

7pm: Fast & Furious By The Tank. Each month, a group of artists comes together to create performance pieces in the 7 days leading up to the event in response to the headlines of the week. The work tends to be made very quickly and, in many cases, very furiously!

Live performance exists to serve as America’s cultural conscience. It is the artist’s responsibility to make work that shines a light on things when they’re wrong, celebrate them when they’re right and model alternative possibilities. This kind of work can change hearts and minds. The artist’s ability to act fast and create work quickly in response to events, policies and general dumpster fires has never been more crucial, as they participate in building the language of resistance.

7:15pm: Quantum Theatre: Constellations Roland, a beekeeper, and Marianne, a quantum physicist, meet through a chance encounter and a multitude of possibilities stretch out before them. Three couples of married actors lead us through shifting realities and an infinity of parallel universes in this romantic play exploring the intersection of free will, destiny, and love. Starring Julianne Avolio, John Michnya, Daina Griffith, Daniel Krell, Marva Williams-Parker and Rico Romalus Parker

7:30: Center Stage Cast Reunion By American Ballet Theatre. To commemorate the 20th anniversary of the dance-centric cult favorite Center Stage, stars from the film will reunite for a virtual discussion. The live stream will air on American Ballet Theatre’s YouTube channel September 1 at 7:30 PM ET. Viewers are encouraged to donate to the company’s Crisis Relief Fund.

Set to participate are Zoe Saldana (Guardians of the Galaxy), Amanda Schull (Suits), Sascha Radetsky, and Ethan Stiefel. The latter two were members of ABT while filming (Radetsky now serves as the artistic director of the organization’s Studio Company). CNN’s Poppy Harlow will moderate.

The 2000 film, a staple for theatre and classical dance fans, follows the ups and downs of a group of ballet hopefuls at New York City’s fictional American Ballet Academy.

8pm: The Producer’s Perspective LIVE! Episode 70: Raul Esparza By The Producer’s Podcast. Ken Davenport sits down with four-time Tony nominee Raúl Esparza (Company, Cabaret, Seared Off-Broadway) to talk about his thoughts on how the pandemic has affected the theatre industry vs the TV/film industry.

8pm: the cell theatre: Tolerance Party: #1 “Ice-Breakers” The cell is thrilled to announce the premiere of it’s first serialized online piece Tolerance Party: #1. Six strangers are brought together in a video chat by an unknown entity and are given a group task, but no one can agree what it is. They’ve received written instructions–they think– and carry with them a belief in a larger purpose. How can these folks learn to co-exist inside a new world order that doesn’t obey the rules of time and space? This dark comedy written and directed by Joseph Hendel (Katzelmacher USA, Beware the Ides of Monday) is a serialized plunge into the social politics of the xenosphere.

Stephen SorokoffMay 10, 2022
Read More
Scroll for more
Tap
The Easy Way Of How To Fix PUBG Crashes
Shame on SAG/AFTRA