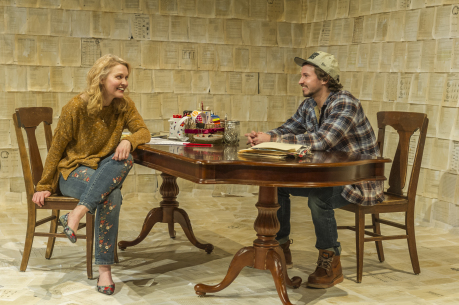 What We Wanted: Poetically Complicated and Slightly Unreal

What We Wanted: Poetically Complicated and Slightly Unreal 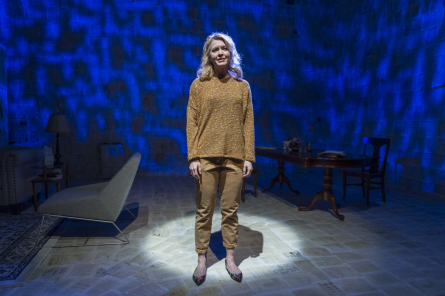 What We Wanted, David Harms new and first produced play focuses on what appears to be an idyllic three-person marriage in a small Ohioan university town. The play attempts to explore the complexities of this arrangement and the interactions and attachments within and beyond it. Watching this long 100-minute play is akin to sitting in on a college poetry reading. The reader has this beautifully bound journal, which makes us smile with approval, in which he has written his deepest and most heart-felt thoughts about alternative relationships and the world that surrounds them. We can tell the reader is deeply connected to this subject matter, and wants us desperately to feel the intensity of the love and the conflict, but like many a student writer, it doesn’t ring quite true. Not yet. It still feels like a work in progress. The words have a playful rhythm and charm, but as we dive deeper into his world, the inexperience to create depth and realistic moments become evident. The endeavor to create a heady poetic play begins to unravel before us, and reveals the slight romantic notions of a dreamer, too desperate to show us how intense, beautiful, and meaningful this all is for him. 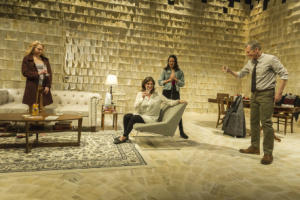 The play, as directed by Drew Foster, begins interestingly enough, with a woman, Sally (an earnest but radiant Amy Bodnar) in full spotlight mode, speaking directly to us about a class she taught today about comets and the gravitational pulls and collisions with other planets. The seriousness and the straightforwardness of this storytelling not-so-subtly hints that this concept is a metaphor for What We Wanted is all about. And if this wasn’t obvious enough, Bodnar, as the free spirited mother, lover, and teacher, explains it more clearly, “Maybe that’s how it is for us, too. Except we aren’t comets, and don’t we have a say in this?” It’s a compelling start, but sadly the idea is forgotten; pushed aside by too-numerous other metaphors, complications, and entanglements, like all those pages on the wall. 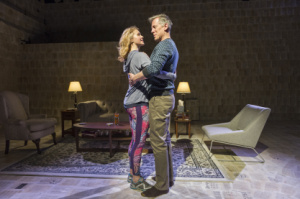 This is a tale about two middle-aged women, a college-aged daughter, and one grown, but child-like man, all intellectuals flaying around each other, colliding and engaging. Be prepared for lots of emoting on what is right and what is wrong, theories of love and betrayal, and thoughts about attachment, anger, and disappointment. It’s like a class in Existential Poetry 101. 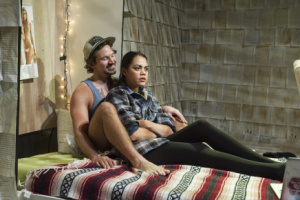 Agnes (a grounded and solid Elizabeth Rich), the maternal core of this family of flighty bohemians, is essential the symbolic editor in chief of this dynamic round table. She seems more grounded and mature then those revolving around her. She is offered a promotion of a lifetime at the literary magazine she already works for, but it would require a move. Julian, her husband, (a sincere but too earnest Steven Hauck) is a professor of literature, who has gotten himself entangled in a possible sexual misconduct suit with a mentee. And this is not the first time, as Agnes reminds him. The rise of Agnes and the possible fall of Julian throws the central relationship into turmoil, threatening the security of all in this unconventional family.
Sally, the third wheel in this romantic marriage, gave up the care of her daughter years ago in order to be with Julian and Agnes. Desperate after the disillusionment and failure of her marriage, all Sally wants is to be enveloped in their supposed pure love: to have nights of pure affection and adoration, dancing and caressing one another. It’s a bit too superficial for my tastes, but at moments this arrangement feels dream-like and beautiful, but other moments, especially when one or another character cries out “Dance with me” and music swells out of nowhere, that it all begins to feel forced and contrived.
Sally has her own baggage that she brings into the relationship, namely her daughter, Reggie (a fiery Kerry Warren) who’s a smart but combative student at Julian’s university. She has returned to be closer to her mother, living in a dorm room nearby, but carries a powerful grudge against the mother that abandoned her for this couple. Warren seems to flip back and forth from feisty to ferocious with a bat of an eye. This feels more manufactured then authentic, although as with most of the reactions here, the underlying sentiment is understandable. This in itself would be an engaging and compelling family dynamic to deconstruct, but Harms throws in one more conflict; a simplistic “Neanderthal dropout”, Dale (a compelling and appealing Brandon Espinoza), the underachieving boyfriend of Reggie. Sadly, Espinoza is saddled with far too many moments when the dialogue is unreasonable and irrational. Even an uneducated man wouldn’t do or say some of these things. In one very peculiar scene, the only one that flashbacks in time to three months earlier, Sally meets Dale for the first time and pressures him (too quickly to be believed) into taking the GED’s and agreeing to tutor him through the process. It’s an odd and disturbing scene as Dale flirts shamelessly with Sally, saying and implying very inappropriate things to his girlfriend’s mother. When Reggie finally arrives, she rightly wonders what the hell is going on, but also dismisses it just as quickly. I’m not quite sure I understand what the intentions of that time -traveling scene is, as we know all the details from previous dialogue, and already had the suspicion that something strange was going on there.
The main problem with Harms’ writing is that he is trying too hard to enrapture us, enthrall us, and impress us with phrasing and intellect, while simultaneously not trusting us to see the complexities. He uses flowery dialogue while getting muddled in the interpersonal relationships. The actors do a magnificent job trying to place these words, actions, and reactions in a grounded place, but the impulses and motivations register as haphazard and not of this earth. The dramatic arch feels unfocused rather then clear, deep, or thoughtful. The characters behave in ways that don’t ring true and we just aren’t buying it enough to take that plunge into his overly romanticized world. The poetic nature of this play loses its handle on the real world, and the inconsistencies in its characters reveal the falseness of the scenario. The look of the piece is lovely, and the craftsmanship that bound this play together shows a great deal of expertise (an eclectic but slightly too busy set design by Deb O-the paper walls are just too much), but the artificiality weighs on us, and our mind disconnects as the poetry is read. When What We Wanted finally comes to an end, we applaud and move on, not entirely sure what that was all about or if it is something we truly wanted; similar to the reactions of the other characters when Agnes reads them a piece of poetry. After much discussion, Agnes states, “Julian’s right. It’s rather slight.”

What We Wanted: Clurman Theatre at Theatre Row until January 15