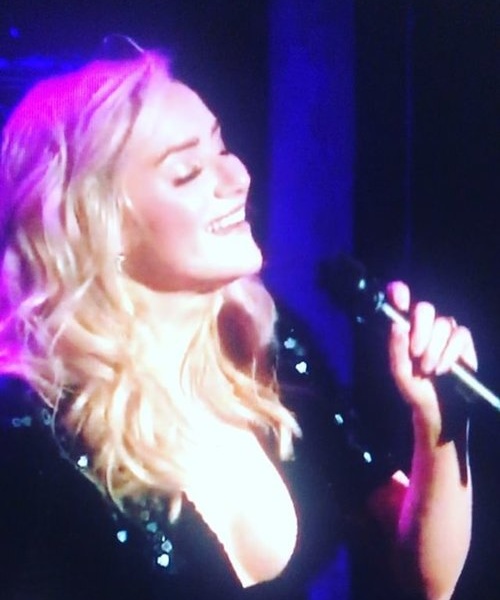 In the opening song of her new cabaret show at Feinstein’s/ 54 Below, acclaimed Broadway performer Betsy Wolfe sang the musical request, “Please Like Me” by Kristen Anderson –Lopez and Robert Lopez. All I could think was: what’s not to like about this utterly delightful, super sexy, tremendously talented songbird? Poured into a gasp-inducing, low cut, black sequined evening dress, she regaled the audience with her glittering voice and effervescent personality. Inside and out, everything about Ms. Wolfe sparkled and shimmered to our constant delight.

Of course, another part of Ms. Wolfe’s great talent and appeal is her chameleon-like ability to effortlessly shift vocal styles. In her next number, “What Baking Can Do”, and later in the set, “She Used to Be Mine”, two Sara Bareilles compositions from the hit musical Waitress in which Ms. Wolfe starred in for some time, she delivered the heart wrenching, folky intimacy demanded by the material.

Just as quickly and as easily, however, she would pop back into her high energy Broadway persona, with songs “Summer in Ohio” and “I Can Do Better Than That” from another of her acclaimed performances as Cathy in Jason Robert Brown’s The Last Five Years. Shift again, and Ms. Wolfe took us lovingly into the musical theater classic Pal Joey with a sensitive rendition of “Bewitched, Bothered and Bewildered.“

She got down and dirty with People Get Ready by Curtis Mayfield and showed her pop/rock chops on Landslide by Stevie Nicks. When the new musical of Nashville is casting, I hope they get to hear that Ms. Wolfe can deliver that style absolutely perfectly, as well.

One of the great joys of cabaret is that it lets us get up close and personal with the performers we love. That often includes hearing tales of their youth we don’t otherwise get to hear. Ms. Wolfe showed us pictures of herself as a freckle faced ten year old with an 80s poodle perm, who was definitely not expected to blossom into the bombshell she became. She used a real stack of love letters she has received from admirers over the years to set up a wonderful rendition of “I Love Betsy” from JRB’s Honeymoon In Vegas.  Best among the wonderful anecdotes she shared, was when she described meeting Stephen Sondheim for the first time, and telling him that  as a child she watched a VHS tape of Into the Woods, which inspired her to become a performer.  When she told him that she watched the tape every day for the entire summer, Mr. Sondheim wryly replied, “Didn’t you get it the first time?”

Another hysterically funny bit she shared, which I wish I could hear again, was describing what came out of her when she tried to learn “Another Hundred People” from Company for her first audition for James Lapine, with only two days to prepare. Her lyric gaffs included “Another hundred people just got off of the bus, and I’m riding the bus, and the bus is named Gus!” Suffice it to say, she didn’t book that job. But her talent led to her working three times for Mr. Lapine in later shows.

As an encore, Ms. Wolfe closed with “You, the Mountain, and Me” by Paul Heaton, a lovely song with an open spirit, which she dedicated to the memory of beloved Broadway performer Marin Mazzie, who was lost to us, too soon last year.

Ms. Wolfe was backed in her set by a sensitive and talented ensemble consisting of M.D. and pianist Andrew Resnick, Justin Goldner on guitar, Michael Thurber on bass and Jared Schonig on drums.

Earlier, in her medley of the women from Mr. Sondheim’s Into the Woods, Ms. Wolfe explained that Mr. Sondheim’s ladies in this show taught us “every life lesson that you ever need to learn.” The lesson for you, dear readers, is don’t miss the marvelous Ms. Wolfe the next time Feinstein’s/ 54 Below gives you a chance to spend an evening with her.

Suzanna BowlingJanuary 13, 2021
Read More
Scroll for more
Tap
Charlie Romo Wins Over The Green Room 42
By the Way, Meet Vera Stark A Tribute To The Women Who Paved The Way