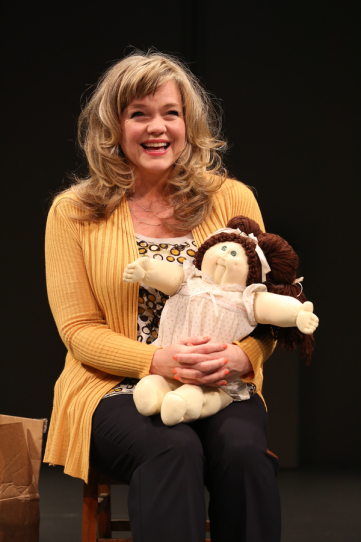 When It’s You: When It’s Really About Him and Her

When It’s You: When It’s Really About Him and Her 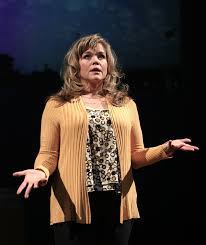 It isn’t long to wait for the first confession to be elicited from the lips of Ginnifer. It’s a small one, about a 4am snack after a restless night, but it’s the first of many for this middle-aged Texan woman who is played with a soft kindness by Ana Reeder (Sight Unseen/Broadway). In the short one act play, When It’s You, written by Courtney Baron as the first play to come out of the 2015-16 Keen Playwrights Lab (Mark Armstrong, director of New York) program, Ginnifer is reeling from the news that assaults her later that same morning. It seems that the man who Ginny dated in her senior year of high school woke up that same early morning hour and proceeded to gun down numerous people in a neighboring parking lot, killing four (including himself). She can’t quite shake the news and her connection to that man, no matter how hard she tries to shift her thoughts. Over the next 70 minutes, this kind but slightly sad and lonely woman circles back and around the disturbing news like a dog and her bone. Wanting to move forward into another objective, she finds herself unable to detach herself from this disturbing connection of past and present. 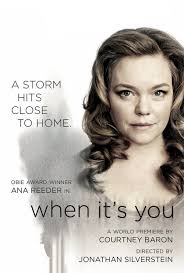 It’s a engaging story Ginnifer has to tell.  The play jumps around many connections of the past and present.  It has to do with the death of her mother, the strained relationships within her life with her family and her childhood in this hometown in Texas.  It also is a reflection on one’s achievements within our maturation and adulthood. But more importantly, what made a man, who played a role in her growth to womanhood, albeit years ago, do such a violent destructive thing? Many in her home town turn to her with that question, just as she does with us.  There is a part of her who wants to understand what it all means, and what do we think of our own life in retrospect.  Reeder does an impressive job circling around this subject, mixing in all the other questions, denials, and curiosities that are running scattered around her brain.  She remains the sweet natured southern blond woman throughout giving us a peek inside that congeniality, but not being simplistic with her as well.  At first her soft-spokenness felt like it would get tiresome as the story floats along on her charming southern twang, but she manages to keep us circling around with her, mainly because she lets us see a bit of what lies beneath that southern drawl. And it isn’t always pretty. 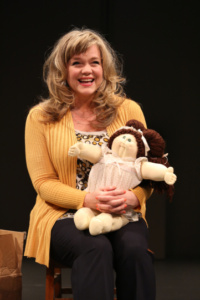 At times the story, directed by Jonathan Silverstein (Tick, Tick…Boom), could use more drama or try to engage us on a deeper level, but this is also part of the story. It’s a simple tale that floats around one woman’s questioning of self and others. The set and costumes (scenic design: Steven Kemp; costume: Jennifer Paar) are reflective of this being as bare bones as can be, and the lighting (lighting design: Josh Bradford) is perfectly attuned to the story’s cues.  The projection design (Justin West), on the other hand, is not as dynamic as it could have been.  There is an opportunity that was missed there,  taking her inner turmoil and expanding around the blank walls of the theatre. I’m not sure if this story didn’t fall a bit short in general, missing a chance to really dig down into something powerful.  Ginnifer struggles to find some meaning and connection to her reaction, but maybe her sensitivity and congeniality held her back from the kind of explosive exploration this topic deserves. It is a struggle we can join her on; trying to understand the man, and trying to understand the lost soul of Ginnifer.
So for more, go to frontmezzjunkies.com
Related Itemsana reddercourtney baronJennifer PaarJonathan Silversteinjosh bradfordjustin westKeen Companykeen playwrights labNewRossSteven KempTheatre Rowwhen it's you
Off Broadway

Genevieve Rafter KeddySeptember 14, 2022
Read More
Scroll for more
Tap
The BP Oil Disaster is Brought Chillingly Back To Life In Spill
Firebrand Theatre’s Nothin’ Like A Dame: A Celebration of Women in Musical Theatre – Sisters Are Doing It For Themselves