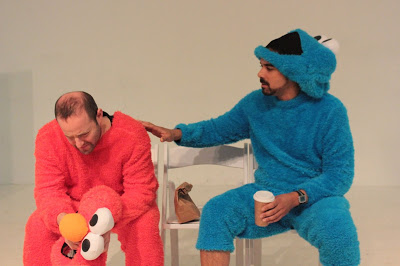 Who Mourns For Bob the Goon?

Who Mourns For Bob the Goon? 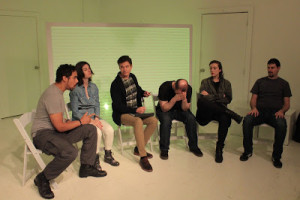 Who Mourns For Bob the Goon? centers around five veterans who all believe themselves to be comic book villains and their therapist, Jonathan. When Langly aka Asurka, the sixth veteran, enters the group, the tables’ turn and conflict ensues. Langly associates herself with the anime character Asurka. It is gradually revealed that each veteran has endured something very traumatic and in coping with PTSD, they have disassociated with present, every day life, and taken on the personas of comic book characters, some of who have endured similar events and challenges. This play is a brilliant and innovative look at the effects of war. Playwright, Joshua Young, skillfully masters the psyches of his characters so that we may look voyeuristically at the kind of every day life that precedes war. Young manages to find light and humor and depth and reality. Beautifully directed by Lucia Bellini, this play is well worth seeing.

The cast is strong, and there isn’t a weak link. Elise Hudson is a powerhouse as Langly. She seamlessly disappears into the role, bringing spontaneity and vulnerability every step of the way. Michael Fewx as Bob is likable right off the bat. You want to root for him, which ultimately makes his fate that much more effective. John Carhart as Jonathon slips into the role of therapist from start to finish. He does a wonderful job. Phillip Christian (Jim) takes us on a journey. He is nothing short of revelatory. Dani Baum (Sybil) and Matthew Rini (Artie) play off of each other incredibly well. Baum brings depth and gusto to her role as Sybil. It’s hard not to feel for Artie, despite his past mistakes, which is credit to Rini’s choices. Jolynn Carpenter shines as Alison, who may be one of the true innocents in this piece. And last, but certainly not least, is Mat Mingle as The Laughing Man. He is terrifyingly good. Kudos to Bellini on her fine direction, character work, and casting choices. This incredible ensemble brings this magnificent piece to life.
The production design works very well. The projections take us back and forth between reality and dreamland. The comic book captions fit perfectly. There are moments within scenes that could perhaps be condensed, as certain instances feel to run a little long, such as the final scene between Langly, Jonathon, and Sybil. But overall this is an incredible play and executed brilliantly. Having most recently been done at notable “Dixon Place,” I look forward to the next fully realized production of this witty, smart, and engaging play.