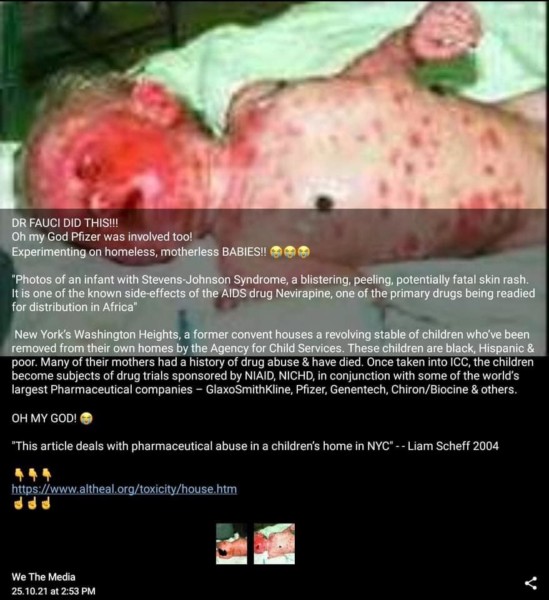 In 2004 a journalist named Liam Scheff wrote an article called “The House That AIDS Built.” In it it stated in Washington Heights the Incarnation Childrens Center (ICC), which was formally a convent house, had a revolving stable of children who had been removed from their own homes by the Agency for Child Services. These children were black, Hispanic and poor. Many of their mothers had a history of drug abuse and have died. Once
taken into ICC, the children become subjects of drug trials sponsored by NIAID (National
Institute of Allergies and Infectious Disease, a division of the NIH), NICHD (the National Institute of Child Health and Human Development) in conjunction with some of the worlds largest pharmaceutical companies GlaxoSmithKline, Pfizer, Genentech, Chiron/Biocine and others. In other words Dr. Fauci!

The drugs being given to the children were toxic known to cause genetic mutation, organ failure, bone marrow death, bodily deformations, brain damage and fatal skin disorders. If the children refuse the drugs, they were held down and force fed. If the children continue to resist, they were taken to Columbia Presbyterian hospital where a surgeon put a plastic tube through their abdominal wall into their stomachs. From then on, the drugs were injected directly into their intestines.

In 2003, two children, ages 6 and 12, had debilitating strokes due to drug toxicities. The 6-year-old went blind. They both died shortly after. Another 14-year old died. An 8-year-old boy had two plastic surgeries to remove large, fatty, drug-induced lumps from his neck. This was AIDS research. The children at ICC were born to mothers who tested HIV positive, or who themselves tested positive. However, neither parents nor children were told a crucial fact — HIV tests are extremely inaccurate.

To read more of the story a copy lives here, here, here and more here and here.

Now the NIH is now accused of spending $100 million more of taxpayer’s money on torturing lab monkeys with ACID and snakes. To see the disgusting video click here and then watch this one.

What will it take for the world to admit Anthony Fauci is a murder, a psychopath and needs to be put down.

Are you as mad as me yet?

Suzanna BowlingNovember 11, 2022
Read More
Scroll for more
Tap
My View: And Then There Is Marilyn Maye
My View: The Cabaret Convention-An Emotional Return