Why Are These Lives Being Ignored? 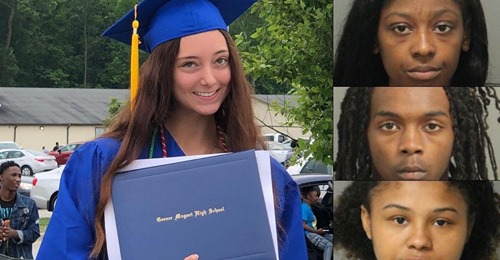 Why Are These Lives Being Ignored?

Veronica Baker was to start college today, instead her parents are planning her funeral. She was murdered in Raleigh, North Carolina in the parking lot of a Bojangles’ a fast food restaurant chain. The killer was a 17 year-old allegedly pulling the trigger. Baker dead in the front seat of her car, her engine running, lights on, and door open.

Keyshara Michelle Deans, 19, Nezyiha Zamir Collins, 19, and Tyreek Qumay Rogers, 18, were all charged with accessory after the fact. It is assumed this is a robbery gone bad.

Veronica Baker’s body was found by a Bojangles’ employee who called 911. The audio of that call can be heard below.

18-year-old Nathan Garza, was shot and killed by Christopher “Roly” Young Martinez a black man, 23, at the Napa Co. Safeway; as stays media silent. Garza was a Safeway clerk for less than a year, he was delivering groceries to a customer roughly 200 feet from the store’s entrance when he was gunned down and pronounced dead at the scene. Less than an hour later, a 23-year-old Martinez was arrested about a mile and a half from the shooting. The suspect’s white Cadillac seen speeding from the Safeway parking lot . A gun was found in the vehicle and the suspect was charged with murder. Garcia lived a block from the Safeway, and never met Garza.

12-year-old Emily Elizabeth Haddock, had stayed home due to strep throat and was alone. 3 black men broke into her home in Vass, NC, to rob it. She was found by her Grandfather shot in the mouth and in the back of her head. She laid in a pool of blood. Van Roger Smith Jr., 16, Sherrod Nicholas Harrison, 19 and Michael Graham Currie, 18, have all been arrested, taken into custody and charged with one count of first-degree murder and one count of breaking and entering.

The Haddock family had moved into the home a few months ago.

NBC and ABC, refused to cover these story. The execution of 5-year-old Cannon Hinnant, was only covered by CNN after the hashtag “Say His Name” trended nationwide. Hinnant’s murder also took place in North Carolina. Now it is in the news because Rome Smith, a Black officer at the Juvenile Detention Center in Cumberland County NJ, on his Facebook page wrote “He should’ve ducked.” The post have since been deleted and Smith’s Facebook appears to be disabled.

These children were not killed by police, but by black angry citizens many of whom are teenagers, who think it’s ok to rob and murder.

Brad BalfourSeptember 15, 2020
Read More
Scroll for more
Tap
Finding A New Sense of Community In Celebrating Journalists Pete Hamill and the Crew of Creem Magazine
De Blasio and His Wife Are a Disgrace To New York With Their “Let Them Eat Cake Attitude”.