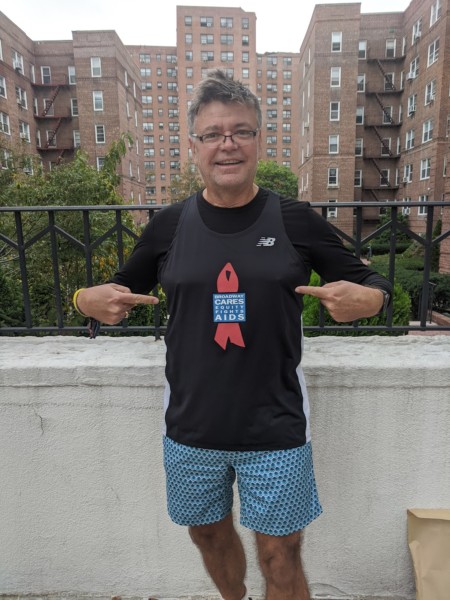 In the mid 1980’s I was a young – let’s say naïve – recent college graduate working as an accountant for a big conglomerate in New York.

My world was very limited, went to a commuter college, St John’s in Queens after 12 years of Catholic education in schools all walkable from my childhood home. School had been my life and now that I was finally in the workforce, my job took most of my time so what was happening in the world was unknown to me.

I was fortunate in my job to meet Jake; he was my department’s administrative assistant (back then he was called a secretary) and he was the first openly gay man I had met. I really didn’t understand what that meant I just knew that he was neat, well organized and amazingly interesting. Before he was a secretary (pardon the use of that word) he was “the skating doorman” at Sardi’s. He worked at Sardi’s, located in the middle of 44th Street between 8th Avenue and Broadway which meant getting a cab could be difficult. When someone needed a cab, he would rollerblade to the corner, grab one and ride it back to the waiting passenger. He showed me an article that was written about him. He was so proud.

One day, when work deadlines had been met and he was taking advantage of a well-deserved slow period after multiple overtimes of him typing financial documents on pre-PC word processors and collating books, I saw him turning over some handmade flash cards. He created these cards to brush up on his Vietnamese just to keep his mind active; Jake had been a Detail Specialist in the US Army in the communications area during the Vietnam War and he would listen to radio frequencies of the Vietcong and translate their transmissions. In a time when straight men were pretending to be homosexual to avoid the draft Jake proudly served his country.

He was a wonderfully kind man, patient, caring and always professional. One Sunday afternoon, when I was walking on the Upper West Side with my girlfriend we ran into Jake walking down Broadway. It was great to see him and he invited us up to his apartment where I saw that his home was as organized as his work environment. I’ll forever wonder in awe when I think of the mess of my own closets that his sweaters were all neatly folded and color coordinated in his dresser drawers. I jokingly asked about his sock drawer and they too were laid out in a progressive color palette.

The many people Jake worked with loved Jake for being Jake and only once did his sexuality come into conversation. After a company volleyball game some of his teammates and co-workers started talking negatively about gay people and Jake took offense telling them, “I am a gay.” Fortunately, they understood and I think Jake educated them that gay people are no different from them.

Jake was in a monogamous relationship – he was monogamous. His partner however worked on a cruise ship sailing in the Caribbean which at the time was an epicenter for the AIDS epidemic.  I can’t remember the dates but it was around 1983 that Jake started to be ill more often and started to display some lesions on his skin. At this time AIDS was still a mystery and people were very frightened of the disease as we still didn’t know how it was transmitted. One of my bosses asked me what my thoughts about Jake were and if we should let him go and, surprised, I said, No! It’s Jake!

In 1984, the company Jake and I worked for moved out of New York and we both chose to take severance packages. I secured another job in New York but Jake was still looking so I said let’s start a word processing business. Remember this was many years before personal computers and term papers, resumes and menus were a good business plan. I purchased an ATT personal computer with Multimate word processing program and a laser printer that weighed as much as 150 laptops do now. Sadly, we never got to open the business.

Jake began to get sicker and with no income, he had to leave New York and move in with his parents in a small town in Pennsylvania. I kept in touch with him for the next few years by telephone. I didn’t see him but through our conversations I knew his body was giving out on him. At first, he would garden around the house; then he became weaker so he would read in his chair to try to keep his mind active but then he told me he had gone blind and he could no longer do that. It was only after he had lost his sight that he ever said the word AIDS. I think he knew I was still naïve and held out hope. Shortly after, I received the phone call that Jake had passed away.

Jake passed in 1986, too young at the age of 41, a year before Equity Fights Aids was formed and two years before Broadway Cares. It’s difficult to realize that Jake passed away 35 years ago but in those years I know he has been with me as I have run marathons, climbed mountains and, yes, even eaten at Sardi’s. During those years Broadway Cares has broadened their reach to providing food, medicine, health care and disaster relief to all 50 states and Puerto Rico.

I have been a supporter of BC/EFA with donations but this year I have the chance to do even more. I know as I run the NY Marathon, at an age much older than what Jake was when he passed he is running with me and with all the people that Broadway Cares has helped over the years.

Please run with me and Jake by donating to Broadway Cares

Suzanna BowlingSeptember 19, 2022
Read More
Scroll for more
Tap
The Lehman Trilogy Rings The Closing Bell At The New York Stock Exchange
Why Do Barry and Fran Weissler Always Eat The Biggest Piece Of The Broadway Pie?