I had only known of Jane Lynch from Glee and from her taking over as Miss Hanigan in Annie in the last revival on Broadway, so when I heard she was performing at the Cafe Carlyle, I really wanted to see what she could do and I was bowled over. I first caught a glimpse of Ms. Lynch, when I turned my head at the bar (turns out they enter from there), she is actually strikingly pretty. I could hear Ms. Lynch and her longtime performing partner Kate Flannery (The Office) laughing, cheering on the band and genuinely excited. The show started with their band, a jazz quartet led by Tony Guerrero (on trumpet and later on piano giving his Louis Armstrong impression), Mark Visher (on sax and later flute), Rich Zurkowski on bass, and Sean McDaniel on drums giving a Dixieland swing to “When Your Smiling.” 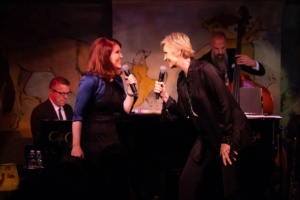 Enter Lynch and Flannery with a rendition of the Barry Sisters’ bossa nova take on “Far From the Home I Love” from Fiddler on the Roof . In wonderful harmonies this song took on a Yippee ki-yay feel. They followed that up with a barbershop quartet version for two of Steve Allen’s “This Could Be The Start Of Something Big”. I really loved the Jobim classic “One Note Samba” blended with Herb Alpert & The Tijuana Brass “There Was a Little Spanish Flea.” A yiddish version of  “Bei Mir Bist Du Shon,” ended a majority of the duo portion. 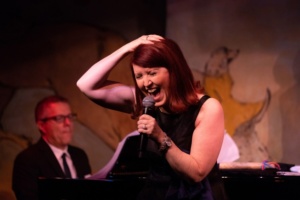 Suddenly the show took this odd turn as Ms. Flannery brought Christmas into September with “Good King Wenceslas”. Not a fan of TV, I have never seen The Office, nor did I know who Ms Flannery was. Her comedy, which is broad, is not my particular brand, nor is her voice, which is strident and off pitch when on it’s own. Turns out the two, have a Christmas album “A Swinging Little Christmas”. 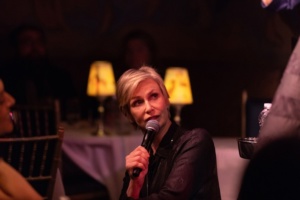 Next up, Ms. Lynch started to really surprise me. I actually did see “A Mighty Wind” and loved the The Folksmen’s “The Skeletons of Quinto”. With the Castillian accent, Ms. Lynch made me long to hear her  sing “The Boy From.” She next sang “Blood on the Coals,” from the same fictional group. What was so intriguing, was the delicate soprano that Ms. Lynch has. Through-out the evening she supplied a low, almost baritone register, but now the audience got a glimpse of her range. She also has the “it” factor that makes you want to watch her. Add that to her quick wit and perfect one-line zingers and all I could think was, why is somebody not writing a show for her? 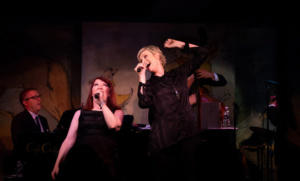 A 50’s inspired “Bibbidi-Bobbidi-Boo” from Disney’s Cinderella, brought back Ms. Flannery, which proceeded into an out of tune “Shy” from Once Upon a Mattress. 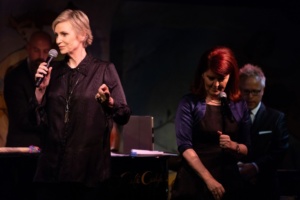 I never knew Bob Merrill wrote “Mambo Italiano,” off the cuff for Rosemary Clooney and that the name of the song was the restaurant he wrote it in. Never really a fan of the song, Ms Lynch had me rethinking how I felt, with her delightful rendition.

The disappointment and the hot parade of songs that enforce that love isn’t what you thought it was and how songs manipulat,e you was clever. Richard Rodgers “Nobody’s Heart (Belongs To me)” and Neely O’Hara’s “I’ll Plant My Own Tree” from “Valley of the Dolls” were apart of this set. Turns out Flannery played Neely, Off-Broadway.

From the quips, the amusing banter of friendship, the entertaining stories and schtick, came the title song for the evening “Two Lost Souls” from Damn Yankee’s.

Jule Styne’s “The Party’s Over” from Bells Are Ringing, brought back the harmonies.

As one of the encores Nicki Minaj’s “Anaconda”, had Lynch twerking her behind off, as well as showing another dimension to her repertoire. “Songs That Made Us Cry When We Were Kids Medley”, I found to share with you on youtube and as the final farewell Handel’s “Hallelujah Chorus.” 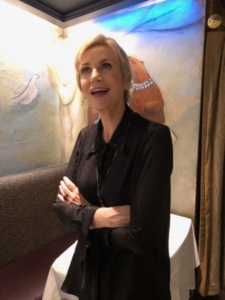 I left the Carlyle wanting to know more about Lynch. Someone needs to find a show to highlight this mega watt talent and not just as a supporting player. Consider me impressed.