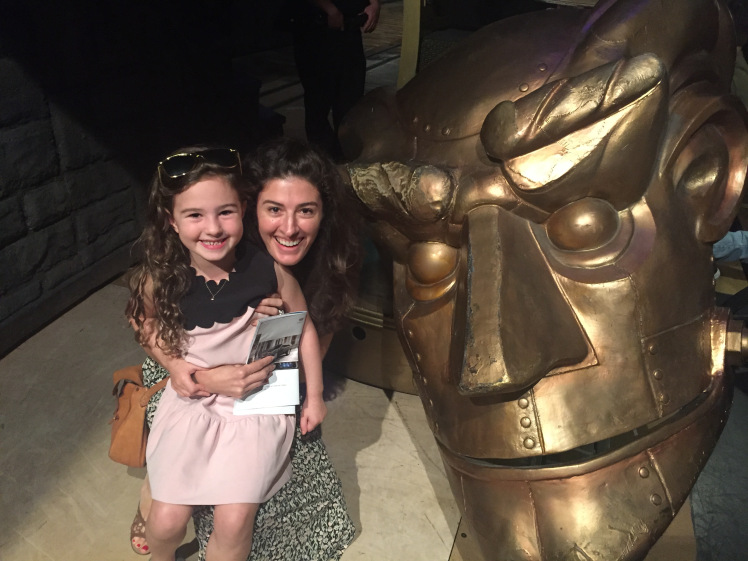 Wicked: A Green Witch Can Be A Good Witch, Hazel

Wicked: A Green Witch Can Be A Good Witch, Hazel 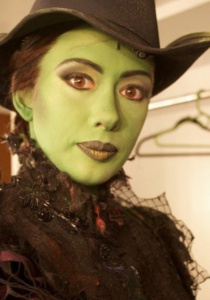 What evokes more childlike wonder than going to the theatre? To suspend your disbelief and slough of adult cynicism? Today I won the theatre geek jackpot. I went to see Wicked (music/lyrics by Stephen Schwartz; Book by Winnie Holzman) on Broadway for the first time starring my collegiate friend, Mariand Torres, as Elphaba. As if this was not enough, I brought my 6 year-old daughter, budding theatre enthusiast, Hazel. 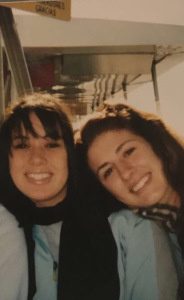 Cheryl and Mariand in College

Let me give you some back-story… There is a reason with all of the theatre that I’ve seen over the years that I’ve never seen Wicked (based on the book by Gregory Maguire). When I was 19, I was in theatre school and we were doing practice auditions for an upcoming show.  I finished my song and sat down feeling content with my singing, when next strutted up a raven-haired bombshell who sang with such finesse and power that I knew at that moment I was seeing a star. I also knew that I would never make it in musical theatre with that girl as competition. I knew that someday she would star as Elphaba in Wicked on Broadway and I wanted to see only her play that part. 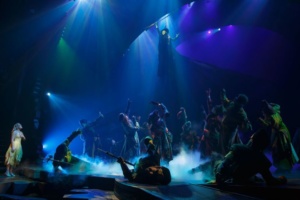 When I got word that Mariand would understudy Elphaba, I waited for her to be scheduled to perform and with the effervescent excitement of my 6 year-old, I purchased the tickets and off we went. 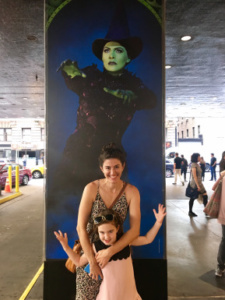 Hazel and Cheryl at Wicked

The entire experience started with my daughter in the lobby, she was in awe of every design detail. I probably wouldn’t have even batted an eye at these things if I were alone.  She was nervous and excited. She was concerned about the spooky dark nature of the show, and although we discussed the plot line, it remains difficult for her princess-oriented mind to understand that the green witch was going to be “good.” 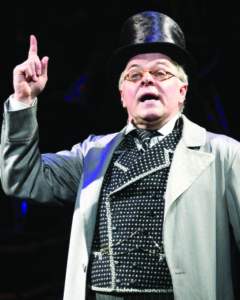 Once we took our seats, her nervous excitement was magnified by the dragon which she was concerned might come down and eat us. She also noted the lighting of the emerald city and wondered aloud why and how it glowed. I reminded her again that this was all for entertainment and the lighting (by Kenneth Posner) helped create an emotional experience. Once the curtain went up, cranked by spooky monkeys, Hazel leaned forward in her seat so far onto the edge that she nearly fell off.  She was immediately taken by the striking costumes (by Susan Hilferty), which transported the audience into the fantastical world that felt timeless and full of possibility.

As a mother to two small children, my precious free time requires me to be very selective about the shows I see, and I admit that I thought this show was going to be mostly cliché and fluff, without much substance. I was wrong. This show (directed by Joe Mantello) with the current political climate has more relevance now than ever before. Wicked is the story of a gifted woman in the fictitious Land of Oz with an unfavorable physical condition (green skin), who is driven to public service, fighting for minority rights against a regime who wants to silence and imprison minority members of its own society. Oh, and the Wizard of Oz (artfully portrayed by PJ Benjamin) is a nasty, slimy, lecherous, lying, snake oil salesman and talentless hack, who rules Oz through manipulation of press and fear mongering. Sound familiar? 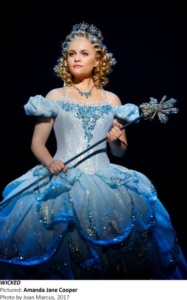 Galinda, played by Amanda Jane Cooper had not only great vocal chops, but also added a sympathetic quality to her performance with colorful acting choices adding dimension and depth. She successfully enchanted the audience into loving her and understanding the circumstances that drove her to make the choices she made. She “knows about popular” and shows in her redemption at the end of the show that she can choose to use those powers for good. Perhaps, this is a hope for our political future as well.

Elphaba, played by Mariand Torres, was a strong and formidable force on stage.  She demonstrates vulnerability with a touch of humor in the party scene when dancing, and is quite endearing as she accepts Galinda’s help to be popular. She clearly sets up that the problem is with how society relates to her rather than the lack of effort on her part. Throughout the show Torres successfully adds self-deprecating humor which makes her that much more likable. She is endearing and lovable in intimate moments and her voice mourns in “I’m Not That Girl“. But it is in the power ballad “Defying Gravity” that I cried the ugly cry as Hazel gripped my arm. With tears streaming down my cheeks, I couldn’t help thinking about how hard Mariand has worked all of these years, and it’s so obvious, as it was at that first audition, that she was meant to fly. I know over the years of pounding the pavement that at times she must have felt defeated, that she wasn’t enough of this, or too much of that. She has a voice not of this place and she is never coming down again.
When the curtain came down on Act One, Hazel looked at me with those big brown eyes and said, “I love this. That was amazing.” And I had the pleasure of saying, “and it’s not over yet!” 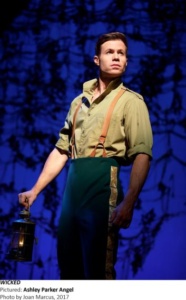 Act Two was much more plot-centric and I regretted at moments that Hazel had not yet watched The Wizard of Oz, so she missed the assumed knowledge of Dorothy, which meant she missed some funny moments. She also missed some of the references made by the set itself (by Eugene Lee). When the Boq (Jye Frasca) and Fiyaro (Ashley Parker Angel) are changed into Tinman and Scarecrow, it was a tough leap of understanding for my first-grader. I just leaned into her ear and whispered that she had to change them to save them. 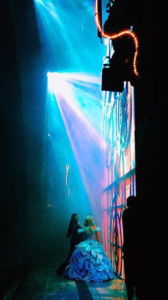 I laughed aloud as Elphaba yelled down the hatch at Dorothy. The final glimpse of Elphaba and Fiyero/Scarecrow walking off together was a sweet and satisfying resolution for me, but Hazel had a lot of follow-up questions:

And my favorite question, how can she just take off her glasses and still see?

All reasonable questions for her first experience with moral ambiguity. Her first foray into the grey areas of the adult world was an overall exceptional experience and one that I can build on as a parent.

I’m in love with this show; I’m in love with the message it sends and the lesson that there is perhaps wickedness thrust upon good people at times. I fully intend to teach my daughter that doing what is right and being popular are not necessarily the same thing. So, Hazel loved the show. She wants to be Elphaba for Halloween. I couldn’t be happier or prouder as a mom that she wants to be nasty, I mean Wicked.