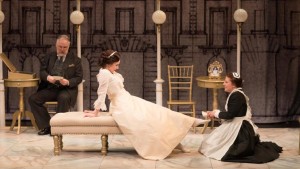 TACT and The Gingold Theatrical Group have combined to bring us a rare revival of George Bernard Shaw’s first play Widowers’ Houses written in 1982. The play is just as relevant today as when it was written. Shaw’s play is as much a romantic comedy as a capitalism vs. socialist play, where the players are corrupted, even the ones who don’t know it.

Set during a Rhineland holiday, a young doctor, Harry Trench (Jeremy Beck) falls impetuously in love Blanche Sartorius (Talene Monahon). His and his companion William de Burgh Cokane (Jonathan Hadley), seeks to help him realize the match. Her father Mr. Sartorius (Terry Layman) will not give him her hand until he knows his relatives will accept her as an equal. When Trench realizes from Sartorius’s agent Lickcheese (John Plumpis), that his prospective bride’s income derives from her father’s profits as a slum landlord, he asks Blanche to live only upon his income. The hot-tempered Blanche flatly refuses. Sartorius’s claim that the poor cannot be helped, “however much you may sympathize with them”, also strikes a chillingly topical note in today’s climate. Sartorius reveals that Trench’s income depends on interest from mortgaged tenements and therefore he is as dirty as the money made by Sartorius..

The cast is excellent with Ms. Monahon, all but stealing the show. This terrific actress knows the subtle layering of throwing a complete fit on stage and not making it look melodramatic. We believe every fiber of this head strong lass. I look forward to watching what she will do next. Also at the top of his game is Mr. Hadley, whose credits on Broadway work for him here. He knows just how far to go, before it is overacting. Mr. Plumpis has some nice dual moments as Lickcheese.

David Staller’s obviously knows and loves this material and it shows. His direction is crisp, entertaining, fleshed out and fresh. He draws the best from his actors and allows them to go to the edge of their characters, without falling off the cliff.

The costumes by Barbara A. Bell are impeccable.

This is a must see for all who love Shaw and a great introduction to those who don’t.

Suzanna BowlingJanuary 12, 2022
Read More
Scroll for more
Tap
The New York Pops is Magical With Jason Robert Brown and Bobby Lopez on Keys
Southern Comfort A Show From The Heart