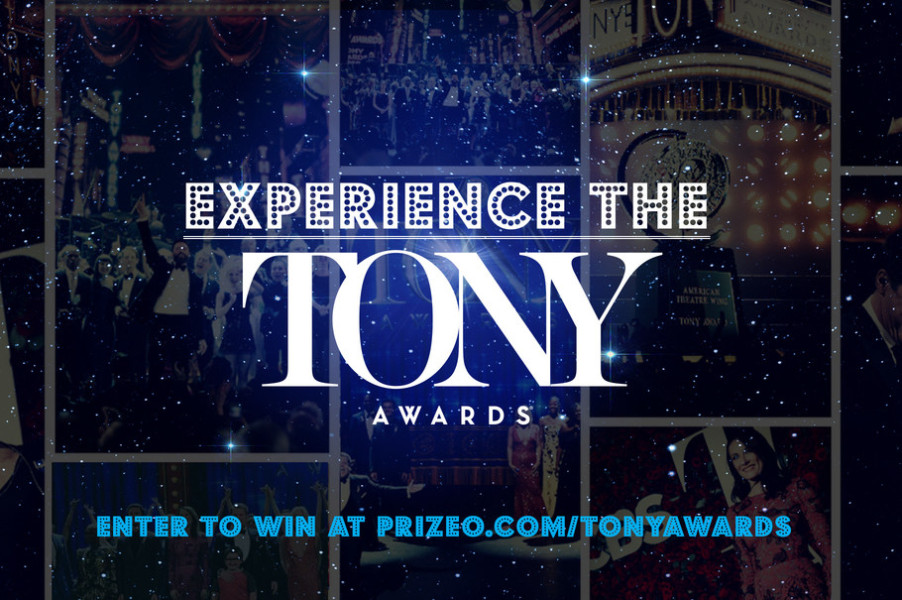 Prizeo, the online giving platform that democratizes giving at any income level, announced today that they will partner with the 71st Annual Tony Awards, to host a special sweepstakes that will give one lucky winner the chance at the Ultimate Tony Awards® Experience.

“It’s important now, more than ever, to advocate for arts education,” said Charlotte St. Martin, President of The Broadway League, and Heather Hitchens, President of the American Theatre Wing. “We are proud to partner with our friends at Prizeo to offer this exciting chance to do just that. Join us in supporting these two crucial programs that educate students and motivate a lifelong appreciation of the arts.”

“We’re excited to host this Ultimate Broadway Experience at the 2017 Tony Awards on Prizeo in support of arts education,” says Jan Friedlander Svendsen, Charity Network’s Chief Marketing Officer. “Our #IWasThatKid campaign will resonate with theater lovers of all ages and we’re confident it will raise significant funds for The Broadway League Foundation and the American Theatre Wing. And, as the former Director of Marketing and Business Development for The Broadway League and the Tony Awards, it’s a privilege to introduce these two legendary Broadway organizations to our generous Prizeo community to raise funds for these two worthy causes.”

The Ultimate Tony Awards® Experience runs from April 25 – May 23 at prizeo.com/tonyawards. The lucky winner will be announced May 30.

The 71st Annual Tony Awards will broadcast live on Sunday, June 11 (8:00-11:00 PM, ET/delayed PT) from Radio City Music Hall on the CBS Television Network. The Tony Awards, which honors theatre professionals for distinguished achievement on Broadway, are presented by The Broadway League and the American Theatre Wing.

The Broadway League Foundation Inc. is the charitable arm of The Broadway League, the national trade association for Broadway and Touring Broadway theatre. The Foundation’s mission is to enlighten and increase the public’s knowledge, appreciation and awareness of theatre arts; and to preserve and promote live theatre as a vital and culturally significant artistic medium.

Among the Foundation’s many initiatives is Broadway Bridges™, whose goal is to give every New York City public high school student the chance to see a Broadway show before graduation. Working with the support of the New York City Department of Education’s Office of Arts and Special Projects (OASP), this effort represents Broadway’s commitment to New York City and Broadway’s future audience, as well as its workforce. This program is being developed as a pilot program with the hopes of expanding it throughout the country.

By bringing students to Broadway, the Broadway League Foundation is working to cultivate the next generation of theatregoers and professionals.

We invite you to learn more about Broadway Bridges and the Broadway League Foundation.

As the American Theatre Wing celebrates our Centennial in 2017, we reaffirm our unwavering commitment to make the American Theatre more vital and diverse, and to bring theatre into the lives of young people across the country. Our mission is to ensure that the next generation is on stage, behind the scenes, and in the audience.

Theatre education has a giant, measurable, positive impact on the lives of young people. However, only 45% of high school students and 4% of elementary students have access to it. For students of color, divide those numbers in half. This is a crisis for the future of artists, audiences, and diversity in the arts.

We believe one of the most powerful ways to promote the art form is to invest directly in the early development and training of young artists, and to empower teachers to offer the best possible theatre education. With support from the Andrew Lloyd Webber Foundation, the American Theatre Wing is bringing theatre into the lives of talented high-need students across the country. Through the Andrew Lloyd Webber Initiative we:

* Provide teachers with resources to help keep theatre alive in schools across America.

Now, more than ever, is a crucial, meaningful time to invest in the future of artists, audiences, and diversity in the arts.
For more information on the American Theatre Wing and the Andrew Lloyd Webber Initiative, visit americantheatrewing.org.

Prizeo is a celebrity digital fundraising platform that provides influential personalities an unparalleled platform to raise funds and awareness for charitable causes by offering fans the chance to win unique experiences. Launched in 2013, Prizeo has raised tens of millions of dollars for thousands of charities and has ignited a base of millennials to become first-time charitable donors through an exciting and inclusive platform.

Prizeo is a member of the Charity Network, named one of Fast Company’s 2017 Most Innovative Companies. It serves as a sister company to Charitybuzz, an online charity auction platform, and Chideo, a charity video network.  To learn more visit: prizeo.com

Charity Network, named one of Fast Company’s 2017 Most Innovative Companies, harnesses the power of celebrity, technology, and media to raise awareness and funds for some of the world’s toughest challenges. With a mission to complement traditional fundraising models and help charities transition from analog to digital, Charity Network has raised hundreds of millions of dollars for causes across the globe. Launched in 2016 by entrepreneur Todd Wagner, Charity Network is the parent company to three top digital fundraising platforms: Charitybuzz, Chideo, and Prizeo. Each platform is a leader in its own field: Charitybuzz in online charity auctions, Prizeo in online sweepstakes and experiences, and Chideo in cause and entertainment content. These three consumer-facing platforms, all working in tandem, reach a broad and diverse group of donors from millennials to baby boomers through a network of syndicated partners including Sinclair Broadcast Group, Tribune Company, The Ellen DeGeneres Show, Twitter, Delta Airlines, and more. Together with its partners, Charity Network can amplify a cause message to reach over 80% of US TV households and more than 100 million unique visitors each month. To learn more please visit charitynetwork.com.