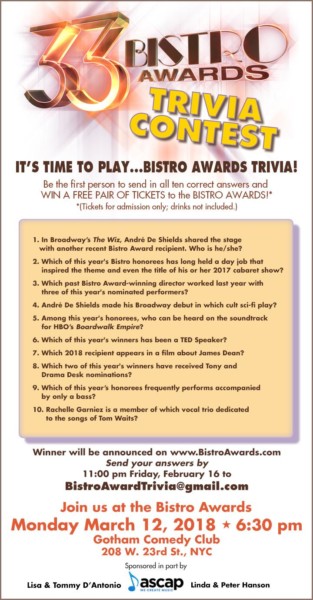 Beginning in the ’70s, De Shields created a string of original shows, among them Have You Ever Been Kissed by Lightning? (starring Mau Mau The Zulu Vampire, Half Man-Half Cadillac), The Insatiable Mechanical Monster, Uptown Sunday Night, and Black by Popular Demand. He played at the Gypsy’s, the Grand Finale, Reno Sweeney, Les Mouches, the Club at La MaMa, the Horn of Plenty, Greene Street, Joe’s Pub and the Laurie Beechman Theatre. He has performed in Los Angeles, San Francisco, and London. In 1984, he co-wrote, choreographed, co-directed, and starred in the Broadway musical revue Andre De Shields’ Haarlem Nocturne. It was produced at The Latin Quarter.

The Bistro Awards gala will be held on Monday, March 12 at 6:30 pm at Gotham Comedy Cub, 208 W. 23rd St., produced by Sherry Eaker, who has headed up the event since its inception. You can win two tickets to the Bistro Awards by answering these trivia questions.

Other award winners are Outstanding Contributions to the Art of Jazz Peter and Will Anderson Thank You for Your Love: Our Celebration of Tom Jones and Harvey Schmidt

It Helps to Sing About It: Songs of Ben Schaechter & Dan Kael

A Life Behind Bars