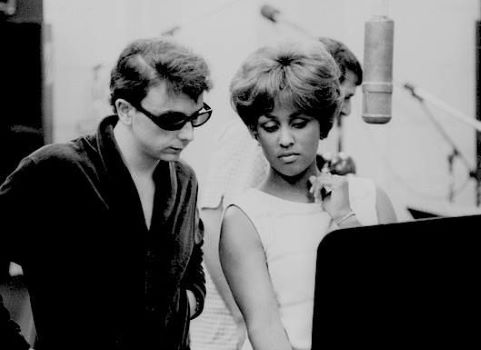 Phil Spector was born December 26, 1939. He was a record producer, musician, songwriter and convicted murderer. Spector was one of the most influential figures in pop music history. In 2009, he was convicted for the 2003 murder of the actress Lana Clarkson and sentenced to 19 years to life in prison.

His first US number-one was the 1958 single “To Know Him Is to Love Him”. In 1960 at 21, he co-founded Philles Records and was the youngest owner. In the 1960s, he wrote, co-wrote, or produced records for acts such as the Ronettes, the Crystals, the Ramones, Darleen Love, the Righteous Brothers and Ike & Tina Turner. He developed the music production formula known as “The Wall of Sound.” Spector initially retired from the music industry in 1966.

In 1969, Spector returned and produced the Beatles’ album Let It Be (1970), and several solo records by John Lennon and George Harrison. In the 70s, Spector produced eighteen US Top 10 singles with “You’ve Lost That Lovin’ Feelin'” (co-written and produced for the Righteous Brothers, 1964), “The Long and Winding Road” (produced for the Beatles, 1970), and “My Sweet Lord” (produced for Harrison, 1970). According to BMI, “You’ve Lost That Lovin’ Feelin'” is the song that received the most US airplay in the 20th century.

In 1973 Spector won the Grammy Award for Album of the Year for co-producing Harrison’s Concert for Bangladesh (1971). In 1989 he was induction into the Rock and Roll Hall of Fame, and in 1997 the Songwriters Hall of Fame. Rolling Stone magazine ranked Spector number 63 on their list of the greatest artists in history.

Spector has ten Broadway credits, writing songs featured in musicals including Bette Midler’s Clams on the Half Shell Revue, Leader of the Pack, Smokey Joe’s Cafe, Beautiful: The Carole King Musical, The Real Thing, The Cher Show and Tina: The Tina Turner Musical.

Spector died in prison at the age of 81.

Genevieve Rafter KeddyMay 10, 2022
Read More
Scroll for more
Tap
What to Watch in The New Year: Jan 18
How to Put Music on iPod Shuffle Without iTunes: A Few Ways