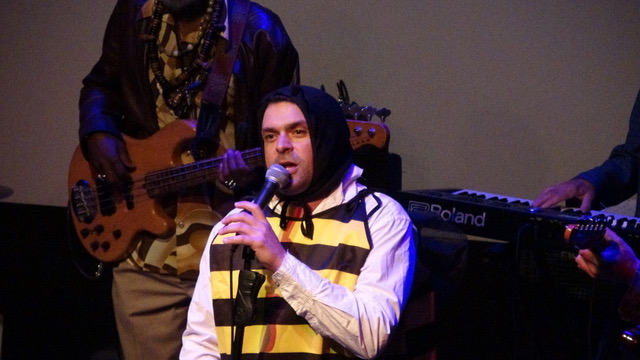 With a Little Help… It’s John Belushi, is an original “play-with-music” and a long-awaited tribute to John Belushi. Weaving the narrative of his meteoric rise to prominence as an iconic American entertainer, Jack Zullo (Writer/Producer/John), boldly begins with John’s inevitable demise at Hollywood’s Chateau Mormont.

Jumping back to the beginning of John’s Midwest roots, the journey continues through his finding young love, the pivotal night in 1967 when he saw his first Second City Show, and into his relentless hustle from community college improv maven to Chicago Second City’s legendary Main Stage.

His path to becoming one of the seven original Saturday Night Live cast members (complete with all the major players and his famous bee costume skits-which John reportedly hated), to the formation of his warm up band The Blues Brothers, shows how they became a staple in the SNL show and earned him a Grammy. National Lampoon’s films and radio successes as well as John’s famous excesses are woven in with the endless refrain of Belushi’s homage to Joe Cocker’s Woodstock version of the Beatles’ song “With a Little Help from My Friends”.

Levy Lee Simon’s brilliant direction allowed for balls -out performances from all of his cast. Kudos to him for capturing the energy and hype of the times as John Belushi rose from obscurity and rocketed into the fame that eventually led to his tragic end.

An unexpected treat of the night was the live band that played throughout the play. Even though the group is from LA, the funky Crazy Tomes Bandit seamlessly transported Theatre 80 from a rockin’ Chi-Town blues joint to the SNL stage in New York. Guitar/Vocals: Crazy Tomes; Bass: Wadada; Keys: Malcom Lukens; Drums: Jon McCracken.

With only one more weekend left- get your tickets now! Don’t miss your opportunity to feel John Belushi come to life in front of you.
www.WithALittleHelpShow.com