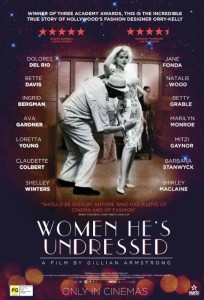 The new documentary Women He’s Undressed traces the rise and fall and rise again of one of the most prolific, and spectacularly talented costume designers of Hollywood’s golden age: legendary three-time Academy Award winner Orry-Kelly. Tracing his four-decade career (which included a very close, live-in relationship with a young Cary Grant) and dazzling creative relationships with a who’s who of Hollywood, this dishy and glamorous film – inspired by his recently published posthumous, long-lost memoir, discovered in a pillow case – unveils the secrets of one of Hollywood’s most singular and outspoken talents. 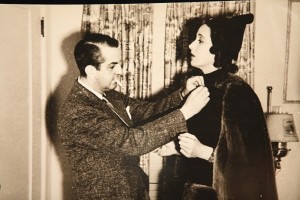 Women He’s Undressed will be released on DVD / VOD August 9 in North America via Wolfe Video.

Veteran Australian filmmaker Gillian Armstrong (My Brilliant Career) mixes recreations of Orry-Kelly’s life with testimonies from intimates, admirers, and Hollywood royalty to create an unforgettable portrait of one of Hollywood’s grand godfathers of glamour.

Outspokenly gay at a time when Hollywood was deeply conservative, a lover of boxing and booze, a charming rebel with a biting wit, Australian born Orry-Kelly always lived a life of artistic and personal integrity. His accounts of life behind the Hollywood golden curtain are legendary, and include his very close relationship with handsome British actor Archie Leach, who later changed his name to become Cary Grant, and entertaining stories of his powerful friendships with top actresses and Hollywood icons of the time, including Bettie Davis and Jack and Ann Warner.

Women He’s Undressed is a must-see fashion extravaganza for film lovers, and a never before seen glimpse into the charismatic and unapologetically bold life of Orry-Kelly.

Women He’s Undressed debuts August 9, 2016 across all digital platforms including iTunes, Vimeo On Demand, and WolfeOnDemand.com, and will also be available same date on DVD via Wolfe Video and many major retailers. The film will also open theatrically on July 29 in Los Angeles at the Arena Cinema in Hollywood.

Suzanna BowlingSeptember 1, 2022
Read More
Scroll for more
Tap
Eddie Redmayne is a Hit at Comic Con as is Fantastic Beasts and Where to Find Them
Feisty Fashion Icon Iris Apfel Sparkles in Albert Maysles’ Penultimate Documentary, ‘Iris,’ On POV