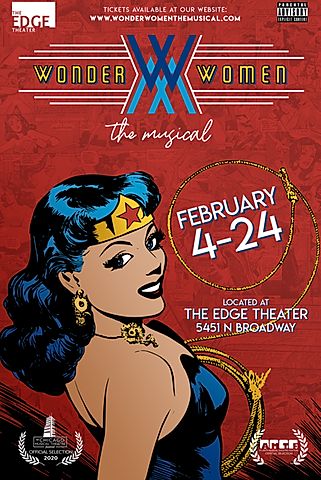 Only two shows into my search for new musical theater treasures at the Chicago Musical Theatre Festival 2020, I’ve struck gold with Wonder Women – the Musical by triple threat composer, lyricist, and librettist, Gregory Becker. Mr. Becker’s singular vision and talent has given us what I predict will be a hit of the festival.

These women consisted of his equally brilliant wife, Elizabeth Holloway Marston (Laura Sportiello) who is called Sadie in this show, his  bi-sexual student turned lover, Olive Byrne (Sydney Richards) who was also the niece of pioneering feminist Margaret Sanger (the eventual founder of Planned Parenthood), and a librarian-turned-dominatrix, Marjorie Huntley (Jayla Williams-Craig). It was their combined personal and sexual experiences which spawned and shaped the future feminist comic book icon. As the song goes in this show, “Behind every man there’s a woman who stands,” or, as in this case, three of them.

All these historical tidbits have been well chronicled elsewhere, including Jill Lepore’s 2014 book The Secret History of Wonder Woman and the 2017 film, Professor Marston and the Wonder Women. But I was not familiar with either before last night. So I sat like a wide-eyed and delighted child, as Mr. Becker deftly laid out the facts of the story, and wove them into an irresistible songfest of sexual freedom and female empowerment.

The show opens with a trio of smart, funny, classically draped muses (Jasmine Lacy Young, Cortney Dane Mize, and Alli Atkenson) singing in glorious 40’s harmonies. They serve brilliantly as both supporting characters and narrative guides throughout the evening.

The story begins  at the creation of Ms. Magazine in 1972, when Marston’s widow, Sadie, comes to argue that the first cover of the magazine should feature Wonder Woman herself. We then flash back to 1911, where young Sadie, a fervent suffragette, is arguing with her father (Noah Berman) that she deserves a chance to have a career, not just a marriage.

Sadie is further inspired by sex education pioneer Margaret Sanger (Jenny Rudnik), whose frank discussion of women’s bodies and their right to control them was quite scandalous in its day. As Ms. Sanger  sings, “It’s your body, so explore it.  Find a pillow, and just go for it!”

We meet young scientist William Marston (Shea Pender) in high school, preparing to apply to Harvard.  Sadie is smart enough to go with him. But Harvard turns down her application just because she is a woman. So they marry, and she helps him create a device to measure changes in blood pressure, which becomes one component of the lie detector. But when he straps young women into it in order to test whether blondes or brunettes have more fun, he gets fired from his university post.

Marston then goes off to teach at Tufts, and Sadie starts law school at Boston University. While teaching there, Marston meets a student, Olive Byrne. She describes being inspired by her aunt Margaret, who seems to her to be like an Amazon. Those were the women of Greek myth, followers of Aphrodite, who lived alone on an island without men. They believed women could only learn the ways of love from one another. Olive also casts an eye on Sadie romantically. She becomes Marston’s research assistant, and then becomes pregnant by him.

They take note of the success of the new comic book heroes, Superman and Batman, whose victories celebrate the use of brute force.  Margaret tells them that the younger generation prefers comic books to reading. The women decide that young girls need a different kind of superhero as a role model, who uses her sexuality as her strength.  But they need Marston to draw her, and pitch her to the male run DC Comics. And so, Wonder Woman is born.

As Sadie, Ms. Sportiello has a lovely soprano and endearing style, but a very small voice that struggles to fill the stage. Ms. Richards is sincere and appealing as Olive, but isn’t a great singer. Also, surprisingly, she does not age or change in her performance as Ms. Sportiello does for the scenes in 1972. Ms. Williams-Craig, dressed in red leather as Marjorie, is as sexy as Eartha Kitt’s Catwoman without even trying. Noah Berman slips effortlessly into the various characters and dialects required as he plays all the supporting male characters. Jenny Rudnick as Margaret Sanger is a Sophie Tucker-esque powerhouse. The three muses (Courtney Dane Mize, Alli Atkenson and Jasmine Lacy Young) all harmonize like angels.

But special praise is due to Shea Pender as William Marston.  First, He fills the theater with his voice and his presence. No microphones needed here. His Boston accent makes him sound hysterically similar to Peter on Family Guy. His perpetual smile and positive energy make me want to see him on Broadway as Elder Price in The Book of Mormon. Strapping, handsome, young non-Equity leading men like this don’t last long in Chicago. Catch him while you can.

Director Chris Pazdernik deftly juggles the shifts in time and tone, always keeping his talented cast moving at a smart clip, with the help of fine, period inspired choreography by Kayla Boyle.

The music, which requires a range of mid century styles, is delivered well enough under the musical direction of Matt Salvo, with the notable exception of a surprisingly reductive piano part. As played by pianist/conductor Hana Fujisaki, the keyboard was never as interesting as the work of  bassist Jeffrey Smith and drummer,Janet Kramer. No credit for arrangement was given, and it appears to have been a case of every man (or woman) for himself.

Mr. Becker is to be congratulated for compressing all this history into a coherent and always entertaining show. He has a great sense of humor, which is particularly evident in his consistently witty and well crafted lyrics. Almost all the songs are comedy numbers revolving around sex, which suits the show just fine. There are a couple attempts at ballads which are musically turgid, and don’t say anything really moving in the lyrics. But the show succeeds on every other level that’s important. Even if it gets better as it moves forward, it’s already a polished and professional work.

Suzanna BowlingJanuary 17, 2021
Read More
Scroll for more
Tap
He Says: 2ST’s Grand Horizons Breaks Down Walls to Get to the Core of What Love Means
Paper Swords Needs Sharpening at CMTF