Woodstock Nation At Square One Publishers 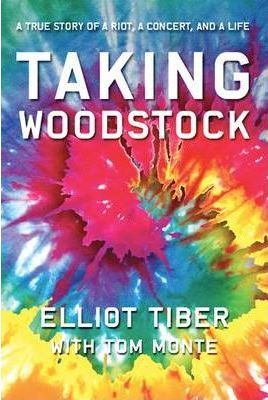 Woodstock Nation At Square One Publishers

Square One Publishers, helmed by Rudy Shur, has published 3 books by the late-writer Elliot Tiber. The first, Taking Woodstock, became a major movie directed by Ang Lee; the second, Palm Trees On The Hudson was terrifically well received and the third, After Woodstock, detailed the aftermath.

Taking Woodstock was launched in fine style with a soiree at Steve Walter’s Cutting Room (curated by Square One’s Anthony Pomes and PR-pasha David Salidor) and the invitation said to come in your finest Woodstock-themed attire. It was a great event … I was there.

In 2009, directed by Ang Lee, Taking Woodstock, the movie was released. With the Woodstock anniversary upon us yet again: Shur reflects on Tiber and his dealings with him: Schur terms it a free-floating column calling it “Notes from a Dyslexic Publisher.” “As a publisher you never know when one book can turn into three. When we published Taking Woodstock, the story behind the gay man who saved the 1969 festival, that was only the first tale of his amazing life.

Several years ago, I was introduced to a gentleman who wanted his manuscript to be published. His parents had owned a motel up in Bethel, New York from the late 1950’s into the 1960’s called the “El Monaco.” As it turned out, in 1969 this man had become the president of the Bethel Chamber of Commerce—and in this position he had the ability to grant legal permits for the staging of parades, theatrical shows . . . and outdoor festivals.

As he explained it to me, he was the one who had invited the producers of the Woodstock Festival to come to Bethel in hopes that their concert might be held on his parents’ land. About fifty miles away, the town of Wallkill had just revoked the Woodstock Ventures’ permit to hold the festival there, and the producers were in a bind.

This gentleman, named Elliot Tiber, made a call to the Woodstock producers. Within a day or two, their core team came to the motel. Unfortunately, most of the El Monaco property resembled a vast wetland, and the Woodstock team quickly rejected Elliot’s offer as they felt their feet sinking into the ground with each step. As they were leaving, in equal parts of desperation and chutzpah, Tiber suggested to Woodstock leader Mike Lang that he and his people next visit a neighbor’s nearby dairy farm instead.Elliot knew the farm owner, and he would be happy to call and see if Lang and company could come by while they were still there. Tiber made the call, and the rest is history.

Max Yasgur agreed to rent his property, and the Woodstock Arts & Music Festival of 1969 was soon to become a legendary event—care of Elliot Tiber’s being able to grant them that crucial festival permit. Of course, this was not the initial focus of Elliot’s material. His manuscript was about the bands and singers who stayed at the El Monaco motel, in a way that read more like a stand-up comedy routine than a book. While his work was funny, its story didn’t add that much to the dozens of other books already out there on Woodstock. As I soon learned, however, he was someone who did not give up very easily. He called me numerous times, and while I advised him to look elsewhere, he chose not to do so.  As we continued to speak, I asked him more questions about the events that preceded his call to the Woodstock producers along with the many paths his life had taken during that time-frame. How, for instance, did he wind up working at his parents’ ramshackle motel? As we chatted, I learned how similar his childhood had been to mine. He and I both had whacky Jewish mothers named Sonia. He discovered he was gay at a young age, and as luck would have it, he had been caught up in the Stonewall Inn riots of late June 1969. For myself, I discovered I was straight at a young age as well when I fell head over heels for Shirley Jones as “Marian the Librarian” in The Music Man—and as luck would have it, 1969 was the year I married my wife, Erica. The more that Elliot and I talked, the more I realized that he had a real story to tell—one that did not center on the Woodstock festival, as much as it did on his own life at that time. From that last conversation, I introduced him to the talented writer, Tom Monte, and the book he had wanted—with a great deal of twists and turns—was soon on its way to being written.

Anthony Pomes, our marketing director, came up with the perfect title, Taking Woodstock: The True Story of a Riot, a Concert and a Life. About six months after the book was released in the early spring of 2007, we received a call from Oscar-winning director, Ang Lee, who wanted to make the feature film adaptation of the book—and in the Summer of 2009, forty years after that first Woodstock of 1969, the movie was released. The book was better, but then again, I might be a little biased. But there was more to Elliot’s story.

Over the next few years, Elliot and I became friends and continued to talk. He filled in further the many details of his growing up in Brooklyn, his early feelings about being gay, his becoming a successful interior designer in Manhattan, and how it all came crashing down one night. That was the night he and his idol, Judy Garland, had to hide behind a table together in the dining hall to avoid the fight that had broken out aboard the ship they were on—and why he wound up working at his parents’ motel on most weekends, away from the city.

I thought if that story were put together, it would make just as fascinating tale as the first—and so did Elliot. A year later, Elliot handed in his prequel, Palm Trees on the Hudson: A True Story of the Mob, Judy Garland, and Interior Decorating.

The book received rave reviews such as “Thought-provoking, fun, meaningful, educational, and historical . . . supremely fantastic writing,” (Feathered Quill Book Reviews), “Exceptionally well-written . . . [a] rags-to-riches-and-back-again riveter,” (BookPleasures.com), and “[Tiber’s] recollections of Manhattan society and being gay in the 1960’s are priceless” (syndicated columnist The Bookworm Sez), among many others. Just this past year, Palm Trees also won the IBPA Benjamin Franklin Book Award in the category of “Best Audiobook – Nonfiction.

”As our friendly banter continued, a third book emerged, After Woodstock: The True Story of a Belgian Movie, an Israeli Wedding, and a Manhattan Breakdown with a Foreword by Ang Lee. To quote the Publishers Weekly review, “Tiber delivers a wonderful account of survival while wrestling with creativity, loss, tragedy, and disconnection from traditional family values.

Elliot Tiber led a most interesting life filled with dreams, adventures, successes and yes, his fair share of failures. And yet, he imbued each of his stories with the unique humor of someone who chose never to give up. Elliot passed away in August 2016. The truth for me as a publisher, though, is the fact that his life story could not have ever been told in just one title. It took three books to embrace his rich and ultimately triumphant life. I will continue to miss our talks—but then again, I can always re-read one of his books whenever I need to be in his world again. You might enjoy reading them as well.”