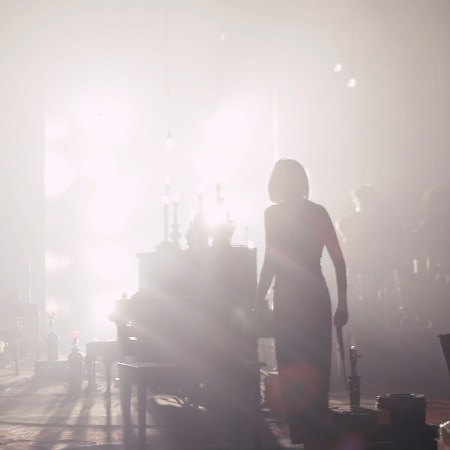 The lights flicker on, as the intense rawness of Woolly Mammoth Theatre and American Conservatory Theater‘s Original Film Adaptation of The Bushwick Starr’s Animal Wisdom becomes exposed and rearranged for our viewing pleasure. The dynamic is strong, and the forthcoming energy electric. She sits, in contemplation at the piano, before the film, intuitively and dynamically directed by Amber McGinnis (International Falls), jumps out of the darkness, gathering forth its inner soul. “Music is joy“, we are told, as a magical musical thread is drawn between god, soul, music, the cosmos, and ghosts. It is there, in the captivating spiritual circle where the hypnotic singer-songwriter-soothsayer Heather Christian begins to pull us in, vocalizing her inner spirit through beauty and unique power. Resonating high and wide into the eternal space, she beacons us closer, inviting us to inhabit the circular mystic union they have inventively creating, alongside her and her crew of magnificent collaborating musicians.

The camera swirls around her lovingly, embracing every bit of the rich lyrical landscape that surrounds her at the Woolly Mammoth Theatre in Washington, D.C., a space that she fully inhabits with gusto, where this piece of wonderment was energetically filmed in March of 2021. With some epic stage direction by Emilyn Kowaleski (Delicious Filth), and a production design by Christopher Bowser (The Undertow), with costume design by Heather McDevitt Barton (Folk Wandering) and percussion design by Eric Farber, we are drawn into her depth within minutes. “My grandmother is a red bird“, she sings with effortless beauty, reverberating the mystical haunting quality that lives most freely inside her voice and her writing. And we are helpless not to give her our full.

“I’m going to ask you to do some things,” she asks, and within one and a half minutes, we are there with her, in the dark, with a drink, a candle, and a bell in hand, waiting for further instruction. Her voice and delivery energize Animal Wisdom, running it forward with an effervescent glee and mystical quietness. Streaming out to us all, Christian wants us to know if we believe in ghosts, because if we don’t, this journey might be hard to sit through in the engaging manner she is hoping to captivate us within. This film is a soul-psychological sandwich, trying to make us friends and cohorts “real quick.” It does not feel forced or contrived, but honest and exciting, or maybe a tad dangerous. We join the circle of talented hummers without question, reaching deep inside the eternal dark and light rolled up into one, and run alongside her through the Louisiana embodiment of ethereal song-storytelling of the most musical order. Featuring a cast made up of Christian (as “Ella,” “Doris,” “Heather”), Sasha Brown (as “Victor,” “Doris,” “Sasha”), Eric Farber (as “Myles,” “Doris,” “Eric”), B.E. Farrow (as “Doris,” “B.E.”), and Maya Sharpe (as “Heloise,” “Johanna,” “Doris,” “Maya”), the virtual front-row seat we take for this requiem mass are as intense and rhythmic of a ritual that you could ever imagine. Even when it flails a bit inside its focus, Animal Wisdom is filled to overflowing with a familial inter-dynamic complex history and heap of solid hard truths. The configurations and rearrangements find spiritual energy, even when the piece meanders too long in the dark “close your eyes” inhabitations. “It doesn’t take a lot of time to know you’re talking to the greatest love of your life,” grandma says, and we feel that soulful connection with the wisdom that lives and breathes inside of this wild musical animal.

Christian is, most assuredly, the center and beating heart of this magical séance, with all things spiritual and divine revolving around her with a force that can’t be ignored. Flipping through slides like a rhythmic percussion instrument brought down from heaven, the imagery grows bigger and bigger as it drives her voice through the intense wilderness of her past. Grief is her beast within, hitting her hard like a leading question, giving energy and wisdom to her lyrics and music that will echo through your veins, as she shapeshifts with a vengeance between rockstar, folklorist, and high spiritual priestess. She effortlessly conjures up a litany of ancient souls to confront her family’s formulations, running with us with wild abandonment through the theatrical space as if it’s her (and now our) collective unconsciousness. “Pianos are animals.” Those words find true meaning in the ferociousness of her vocalizations, as she intuitively blends blues, gospel, and folk in a manner that will unearth the dead, and shake your soul from slumber. “What are you trying to tell me,” Myles? I’m not entirely sure, but her tenderness and openness demand our attention, raising that glass and ringing that bell to the unseen mystical forces that shape who we are and the world that surrounds us, both seen and unseen. In that hypnotic moment of clairvoyant-ness, we are transported and will never be the same.

Those wishing to join in, visit www.animalwisdomfilm.com for tickets and information. This film has closed captioning available.

Animal Wisdom was made in collaboration with and features orchestrations by Heather
Christian, Sasha Brown, Fred Epstein, Eric Farber & Maya Sharpe. The film will feature Piano &
Vocals by Christian; Guitar, Cello & Vocals by Brown; Bass and Vocals by Epstein; Percussion &
Vocals by Farber; Bass & Vocals by B.E. Farrow; and Violin & Vocals by Sharpe.
The stage production of Animal Wisdom by Heather Christian was developed with support
from The Bushwick Starr and world premiered in their 2017/2018 Season. Animal Wisdom was
originally commissioned by the Leeds Playhouse, formerly known as the West Yorkshire
Playhouse, where it was originally developed and presented as part of Transform Festival 2015.