Working in Unison at CMTF 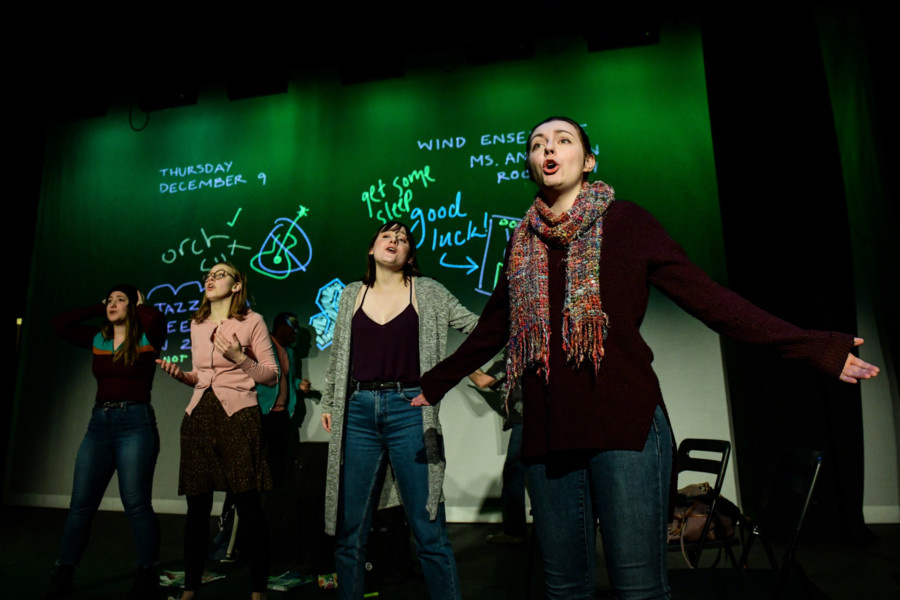 Working in Unison at CMTF

The Chicago Musical Theatre Festival continues to grow in quality and public profile, as it enters its fifth season. The CMTF is the brain child of Chicago’s Underscore Theatre Company, a scrappy young group dedicated to the development of new musical theater works. Over the next three weeks, nine new musicals will receive full but minimally staged productions, along with readings of two other new musicals, at the clean and comfortable Edge Theater, 5451 N. Broadway in Chicago, on both its main stage and in their new, smaller Off Broadway space at 1133 W. Catalpa.

Festivals of new musicals like this one are where theater goers come to experience the fun of seeing a new piece that can’t be seen anywhere else, in passionate if less than perfectly polished form.  If the writers have talent, the expectation is that whatever doesn’t quite work now will be made better as the show moves forward with bigger and better production opportunities.  I will be seeing about half the shows, focusing on those which seemed to be the most promising, after seeing a preview presentation of songs from all the shows last Monday night.

On Wednesday, I attended the first performance of Unison, a new musical with book, music and lyrics almost entirely by one young writer, Adina Kruskal. (The credited “additional music” by Elyse Anderson was only the melody of the opening number.) Not long out of college herself, Ms. Kruskal has written about a group of high school seniors, all friends in band class, who are agonizing over the fate of their college applications. Another new musical in development on the festival circuit over the last few years, Dear Prospective Student (formerly, Admissions), covers the same subject matter. When similar shows are vying for attention at the same time, normally one wins out commercially and the other fades away into obscurity. It’s not always the best one that gets known. But if talent counts, I’d put my money on this version to make the grade.

Unisonbegan as a short writing project for Ms. Kruskal in college, and was developed into a full length show at the O’Neill Theater Center’s National Music Theater Conference. Ms. Kruskal shows real flair as a writer in her music, her lyrics, and her very natural dialogue. There are moments of music where the rhythms lag, or lyrics that could be more compelling. But the overall impression of her score is a strong one. Her cast of characters is also far and away more likeable than those in the competing project. Where the show falls short is its story structure. Ms. Kruskal is a multifaceted musician.  But she probably should have taken on a book writer collaborator with more experience shaping a dramatic story.

The kids in the band class are all very well cast, and nicely guided in their performances by director Mia Lamson Klein.  They include nerdy Ned (a touching Kevin Blair), the Evan Hansen-esque one who feels he’s on the outside looking in.  Joey is a well meaning if slightly dim bulb, played with a Hugh Grant kind of self-effacing charm by Rob Chesler.  His best bud is the good hearted John, played with a wide range of comic expression by Austin Nelson, Jr.  Kat is the most repressed girl in band, ever so sweetly banging out her frustrations on her woodblock, played by the endearing Allison Grischow.  Jill is the underachieving girl who gets rejected by Harvard and seems to be okay about it.  As played by Jenna Rapisarda, she could use some contrasting subtext, not to mention better diction.  The always kidding Bailey was deftly handled by a loveable and rubber faced comedienne, Allie Wessel.   Bailey is best friends with fellow clarinetist, Alicia, the overachiever who is hardest on herself, played by Kayla Higbee.  I will be keeping an eye out for Ms. Higbee, whose tremendous warmth, vulnerability and personal appeal could make her a rising star in Chicago theater and beyond very soon. Finally, Chelsea Milligan gives a very nice turn as their empathetic and supportive teacher, Ms. Anderson.

The devil is in the details of the story, and Ms. Kruskal needs to address them better.  When Alicia sings in “Patience and Practice” that with practice she’ll be “an expert musician and then…be ok” it’s not clear how her perfectionism is holding her back otherwise.  It would have been a lot more interesting if the two friends, Alicia and Bailey, had been competing for the same chair in the same school music program.  “Miami” is a really funny idea for a song, in which John and Joey fantasize about rooming together in college, all the while not realizing that one plans to go to Miami of Ohio while the other is applying to the University of Miami in Florida.   But the comic scene doesn’t land because Ms. Kruskal saves the reveal for a second act reprise, which is too late for the punchline.   The seeds of a serious complication are planted at a party when Jill and Joey turn a combative flirtation into a “rap –off” that ends with them kissing and running off together.  But we don’t learn until the very end of the show that they actually hooked up.  Apparently, hooking up meant nothing to them, as it had no impact on their relationship afterwards.  If Jill had gotten knocked up, or at least thought she had, that would have added some much needed tension as well.

A really missed opportunity was the lack of a song for Ms. Anderson, whose affection for her students, as well as her guidance, could have given us a moving song of real wisdom and experience.  It may reflect on the Ms. Kruskal’s youth that she didn’t see the older teacher’s perspective as being so important.

The truth is, nobody cares about the college application process per se except those who are caught up in it. As an audience, what we care about are the people, their relationships, and how the situation of vying for admission to the best college brings out the issues in their relationships.  Ms. Kruskal addresses the individual issues of each of these students clearly enough.  They serve as cheerleaders and sounding boards for one another. But that’s not drama. That’s thinly disguised exposition. In a well written character piece, the people drive the story. In this one, they are largely dragged through it by the circumstances.

Also, no events happen between these characters which challenge or change the dynamics of their existing relationships at the start of the show. There are scant complications in the story along the way to heighten our interest or make us wonder about the outcome. This lack of plotting contrasts vividly with another teen-centric musical, Dear Evan Hansen. That show is a textbook example of good story structure, in which Evan as a character has a need to be accepted, which drives him to take actions which in turn lead to unforeseen complications between the characters, and increasingly difficult choices for him.  That’s what makes for a Broadway smash.

As a freshman project early in its development, Unisonand its author, Mr. Kruskal, get an “A” for effort.  But just as some kids are meant for Harvard and others end up in community college, some shows are destined for the big time on Broadway, and other may get no farther than college and community theater productions.  I suspect this show will find its future in licensing to high schools, being performed for and by the kids who are living through these very problems.  That would be a  fine measure of success unto itself.