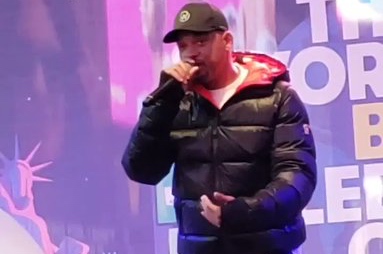 Hundreds of people slept outdoors last Saturday night in honor of the World’s Big Sleep Out, a worldwide fundraiser to end homelessness. 50 events including New York, London, LA took place around the world to raise money and awareness for this plight. In New York Will Smith told the participants a bed time story. The audiences were all shown a video link to stories being read in other cities by other well-known celebrities, including Dame Helen Mirren in London. In California Sean Kingston, Randy Jackson, Meghan Trainor, and Ellie Goulding participated.

The event’s founder, Josh Littlejohn stated “In New York alone there are over 64,000 homeless individuals. Over 100 million people globally. They feel invisible and helpless. This night was to raise political awareness, and generate more affordable housing.”

Though the night was bitter cold the people who took part had nothing but their jackets and a sleeping bag.

The event is expected to raise millions of dollars for charity.