The topic of loss and grief is overwhelming in Mark Chrisler’s Worse Than Tigers, extended until September 8th at The New Ohio Theatre (254 Christopher Street). The play is very surreal with touches of the absurd that are more than metaphors. With shades of Pinter and Ionesco thrown in for good measure. Here, a married couple, Olivia (Shannon Marie Sullivan) and Humphrey (Braeson Herold), have gone into a rhythm that is neither healthy nor says what is really at the heart of the matter. Their smartphones hold more attention than the conversation, which has become stilted and matter of fact, with sarcastic undertones. The two are bickering about the lateness of a friend until he has been announced dead by the social network. The reason for his passing: death by tiger. At that moment, we hear growls, snarling, purring and the mauling of a neighbor. When the local police detective, Kurt (Zach Wegner), shows up due to the tiger on the loose things get tense. Olivia has already hinted she has been having an affair. The egotistical man with a swagger who exudes animalistic tendencies is not about to let Humphrey get the best of him and Oliva cannot resist his magnetism. Kurt tries to get Humphrey to express his emotion, but he is out of touch. As things unravel, not everything is as it seems, and it turns out there are things worse than tigers. 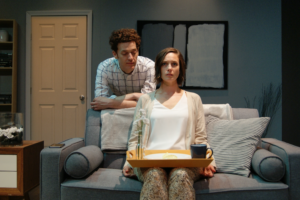 Sullivan runs the gamut of emotions, but it isn’t until her final monologue that she shows just what an amazing actress she is. Pealing down to the core of her rawest emotions it is clear this is an actress to watch. Herold’s nerd who is completely out of touch with his feelings also strips down to the core of his being. Wegner is the perfect foe for this duo, as he preens and dominates but plays with his prey until the challenge has worn off. 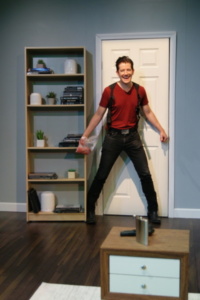 Director Jaclyn Biskup understands the cadence and helps bring this show to a climactic finish.

Sound designer AJ Surasky keeps us on the edge of our seats with the tiger sounds and Kate Ducey’s lighting sets the tone.

Chrisler’s words are very Pinter in the first act, but it is the monologue in the second act where you realize this was wonderfully written. His work is funny, absorbing, prolific and powerful. I followed this journey all the way to the end, never guessing the truth behind what could be worse than tigers. And yes, this is.

Co-produced by The Mill Theatre and The New Ohio Theatre, this is a must see, but you only have until Sept. 8th.