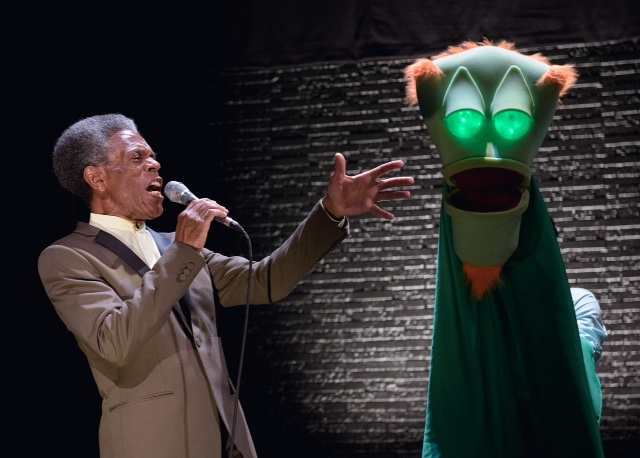 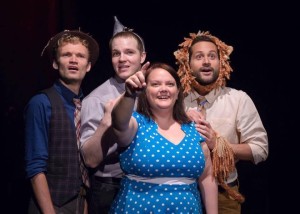 The last time I saw Tony Award-winning actress Annaleigh Ashford in her Lost In The Stars show, I giggled when she referred to some outrageous laugher coming from the audience as “Gay Magic.” I conjecture it is with that same essence of “Gay Magic” the delightfully inventive and wholeheartedly modern take of the cinematic classic, The Wizard of Oz, was just remounted at the Victory Garden Theater. Christened WOZ: A Rock Cabaret, we follow the same basic storyline of Kansas girl Dorothy’s tornado spun house landing squarely on top of the Witch of the East and with her magic kickers, begins a journey to help new found friends find a brain, heart and courage, while learning the valuable lesson, There is no place like home. Only here, we trade the definitive soundtrack for a much more modern spin. Think a mash-up of Glee meets L. Frank Baum’s classic story.  Directed by Scott Gryder, a man with quite a illustrious cabaret résumé of his own, created by Kimberly Lawson and Will Rogers, sadly, you will have to see this show quickly as there are only a quintet of performances currently scheduled. Joining the festivities this go-around, Tony nominated actor, André De Shields, of the original company of The Wiz, here playing the Wizard. With music direction by Nick Sula, guitar by Nick Davio, and drums from Nick Bonaccio, the “Three Nicks” as they are teasingly referred, prove to be the bass and backbone of the sound of the show. The rest filled in by the elegant and elevated voices of the featured cast. 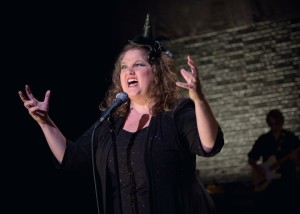 While both Oz and WOZ are two fantasy tales, this show starts firmly in reality, feet planted on the ground, err the stage, with the cast members individually discussing how the movie impacted their lives. “To this day, nothing inspires me to dream more” said a wistful Kimberly Lawson, co-creator of the piece. Current Munchkin, David Lipschutz, wryly reflected, “When I was in 6th grade, I played a munchkin. So nothing has changed.” Kevin Webb reminded the audience this is a tale where “It’s all about the shoes” and Wicked Witch, Heather Currie, waxed poetically about the time she was a child, also cast in a grade school production of the Wizard of Oz. Afterward, her grandfather said of the overall performance, “Well, Toto was good.”  It is then the return engagement of WOZ: A Rock Cabaret truly began. 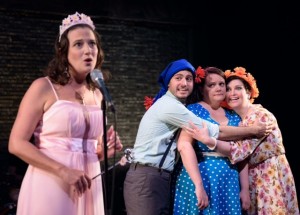 I wasn’t entirely certain what to expect, so early on in the show when they substituted Kelly Clarkson’s “Breakaway” for “Somewhere Over The Rainbow” I knew I wasn’t in metaphoric Kansas anymore. As Dorothy sang, “I’ll spread my wings, and I’ll learn how to fly. I’ll do what it takes till I touch the sky… And I’ll make a wish, take a chance, make a change” I knew this pop princess was steering all of us in the right direction. Lawson may look a bit like Melissa McCartney’s young sister, however she sings with a Kristin Chenoweth like bravado. And speaking of The Chenoweth, her Popular replacement here, Glinda (Clara D’Onofrio) sauntered onto the stage with a simple high pitched “Bubble, Bubble, Bubble, Pop!” A line which drew laughs every time she said it. D’Onofrio reminded me of a younger, brunette Amy Poehler, blessed with both fantastic comedic timing and a Grade A soprano voice, bursting out from under her bubblegum pink dress and tiara. Celebrating the death of the Witch from the East, a pair of Munchkins, David Lipschutz and Sarah Wurz, switching out “Ding Dong! The Witch Is Dead” for Katrina and the Waves “Walking on Sunshine.”What about Toto?  He was represented here too, only this time by the drummer, Nick Bonaccio, in a baseball cap with dog ears. 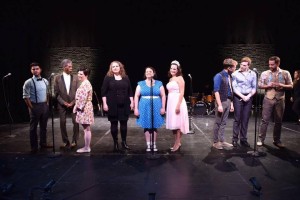 The cast with André De Shields

As Dorothy sets off on her adventure to find the Wizard, she stumbled across three handsome journeymen, clearly designed to be Friends of Dorothy in more ways than one. First up, Scarecrow (Kevin Webb, pulling double duty as he is also currently starring in BITE: A Pucking Queer Cabaret) who drops the old “If I Only Had A Brain” for 1980’s hairband, Whitesnake’s power ballad  “Here I Go Again.” The Tin Man (James Nedrud, last seen as one of the roller skating muses in the just closed production of Xanadu) works his best C-3P0 robotic movements, and a deep v neck grey shirt, to the tune of Foreigner’s “I Want To Know What Love Is.” When this beefcake began to sing, “I want you to show me” an overly eager Scarecrow raised his hand in anticipation of being first in line to do just that. Webb brought the legitimate funny while raising a few eyebrows in the process. Don’t forget, I shared the entire production is sprinkled with “Gay Magic.” Rounding out the quartet, the Cowardly Lion (Edward Fraim recently featured in Design for Living and certainly the best thing about the lackluster Lake Forest Theater’s production of The Secret Garden) who carried both the fury of Queen’s “We Will Rock You” and the tenderness of Sheryl Crow’s “Am I Strong Enough To Be Your Man to life” to remarkable results. As the foursome journeyed forth together, “We’re Off To See The Wizard” was exchanged for The Muppet Movie’s “Moving Right Along.”

When it comes to classic villains, the Wicked Witch is one of cinema’s benchmarks. Standing shoulder to duplicitous shoulder with the likes of Dracula and Darth Vader. This particular Wicked Witch (Heather Currie) was more Wicked then wicked. A set of fabulous pipes and a droll sense of humor wrapped perfectly around Blondie’s “One Way or Another” where her “I’m gonna get ya, get ya, get ya” transformed rapidly into the evil signature cackle. Currie’s approach was far more reticent of Absolutely Fabulous’ Edina Monsoon, the heavy dinking, drug-abusing, hysterical and self absorbed PR agent, instead of Margaret Hamilton’s broom riding, green faced cinematic villain. As an alternative to bringing the Wizard the witch’s broom, Dorothy “brought you the margarita glass of the Wicked Witch.” “Well, that is unexpected” he purrs. This cabaret production was lucky enough to score triple Jeff Award-winning actor, and Tony Award-nominee, André De Shields, to play the Wizard, serenading the Emerald City audience with the rock and roll inspired, Guns and Roses hit, “Welcome to the Jungle” and the tender Michael Jackson classic “Man in the Mirror.” When discussing travel back to Kansas, De Shields quips, “I swapped one of my Jeff Awards, I have three, for a hot air balloon on Craig’s List.”

The soundtrack also works in a fabulous duets between the good and back witches to the Eurythmics 1983 number one hit, “Sweet Dreams (Are Made of This)” subs the “Oh Ee Oh” March of the Palace Guards for the New Kids on the Block’s Hanging Tough “Oh, oh, oh, oh oh” and has enough time to work in both Hero by Mariah Carey as a Dorothy solo as well as Hero by Enrique Iglesias, as the triumphant trio rescued her,  making everyone “Stronger” by Kelly Clarkson by the show’s end. To return home, Dorothy must click her heels three times while reciting “There’s No Place Like…Victory Gardens.” Might I add, there is nothing like WOZ: A Rock Cabaret.

Suzanna BowlingApril 7, 2021
Read More
Scroll for more
Tap
10 Cent Lottery for Spamilton
The First Show at NYMF Has a Title Too Long So Let’s Just Say The First Church of Mary