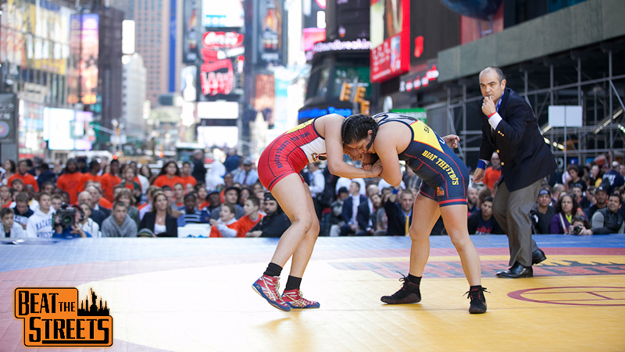 Wrestling Comes To Times Square in Beat the Streets

Wrestling Comes To Times Square in Beat the Streets 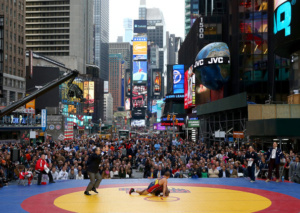 Beat the Streets Wrestling, Inc. and USA Wrestling announced  that the men’s and women’s national wrestling teams of the United States and Japan will square off in New York City’s Times Square on Wednesday, May 17 in the seventh annual wrestling celebration. This year’s event will take place in Times Square’s Duffy Square (between 46th and 47th streets). Competitors for Team USA, which will include members of the 2016 Olympic team as well as other elite stars, and their Japanese opponents will be announced in the coming weeks.

In 2013, the event dubbed “The Rumble on the Rails,” was hosted in historic Grand Central Terminal and featured dual meets between Team USA, Russia and Iran. Playing an important role in the international Keep Olympic Wrestling effort, this historic wrestling event gained international media coverage and helped wrestling retain its status on the Olympic Games program.

The world-class competition has been hosted in Times Square five previous times. In 2011, the United States defeated World Champion Russia, 5-2, the first sports event ever held in historic Times Square. In 2012, another U.S. vs. Russia dual meet was held in Times Square, along with the U.S. Olympic Team Wrestle-off for the 60 kg/132 lbs. position on the U.S. Olympic Team in men’s freestyle. In 2014, Team USA defeated a World All-Star Team in Times Square, 8-3. In 2015, “Salsa in the Square” featured a meeting between Team USA and Team Cuba in the three Olympic styles, held shortly after the historic change in USA and Cuban political relations. Last year the US met Iran in a dual meet in Times Square as a preview to the 2016 Olympic Games.

This will be the eighth straight year in which a major international-style wrestling competition will be hosted as part of the Beat the Streets Benefit activities. In 2010, an all-star challenge featuring top U.S. wrestlers was held on the USS Intrepid, an aircraft carrier docked on the west side of Manhattan.

Tickets are required for entry and can be purchased at www.btsny.org or 212.245.6570 or by emailing beatthestreets@eventassociatesinc.com. Standing room available for non-ticket holders on first come first serve basis. A ticket is required for the Benefit Celebration at the Marriott Marquis. More details are available at http://www.btsny.org/gala.

The mission of Beat the Streets is to develop the full potential of the urban youth and to strengthen the culture of New York City wrestling. BTS works directly with the New York City Department of Education in a public-private partnership to bring the life changing sport of wrestling to over 3,000 New York City student-athletes to help them achieve their personal and athletic goals. Through the operation of wrestling programs in middle and high schools in the five boroughs, BTS and the DOE provide a safe, positive atmosphere in which disadvantaged and at-risk youth can learn the essential life lessons of grit, personal responsibility and teamwork, physical fitness and nutrition, and life-long learning. The goal of fostering strong, well-rounded student-athletes is delivered through coaching, after-school programs, life skills workshops, and summer camps. More information can be found at www.btsny.org.

USA Wrestling is the National Governing Body for the Sport of Wrestling in the United States and, as such, is its representative to the United States Olympic Committee and United World Wrestling, the international wrestling federation. Simply, USA Wrestling is the central organization that coordinates amateur wrestling programs in the nation and works to create interest and participation in these programs. It has over 220,000 members across the nation, boys and girls, men and women of all ages, representing all levels of the sport. Its president is Bruce Baumgartner, and its Executive Director is Rich Bender. More information can be found at TheMat.com