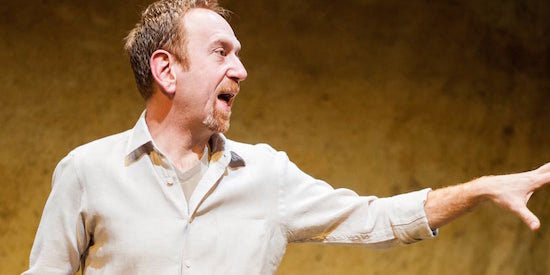 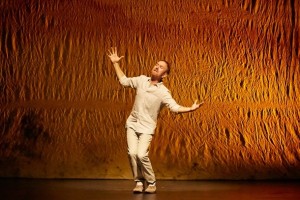 “It’s complicated” are the opening lines of Aaron Davidman’s Wrestling Jerusalem at 59E59. Written and performed by Davidson, the conflict between the Jewish Palestine relations is at the heart if the matter here. Both sides are equally represented as Davidman switches from a Hebrew song to a Muslim prayer. The result is a tour de force performance that is well written, emotionally connected, well directed by Michael John Garcés but in the end leaves you in the same place in which you started.

The show has a vast array of characters that try to figure out who started it all. From his first trip to Jerusalem to study Torah, to a Berkeley high school student in 1985 taking part in an antiapartheid demonstration, to a 9/11 protest against attacks on Arab Americans, that turns into “Death to Israel,” “Death to the Jews.” We travel with Davidman to the West Bank, Ramallah, Hebron, and the Dead Sea as young, old, male and females from all walks of life chime in. Back and forth Hamas and Zionism are argued.

Mr Davidman is a talented actor making each person real. Michael John Garcés, artistic director of Cornerstone Theater, has a fluidity to his direction that almost seems like a dance. Stacey Printz’s choreography adds to this tango. Nephelie Andonyadis set uses a wrinkled canvas, which turns into many scenic spots thanks to Allen Willner’s textured lighting.

The conversation between the Palestinian Israeli conflicts have been going on since the beginning of time and will continue to rage as we act like children in a sandbox. Living in peace should be a given but it seems territorial rights will always trump, which leaves endless conversations.