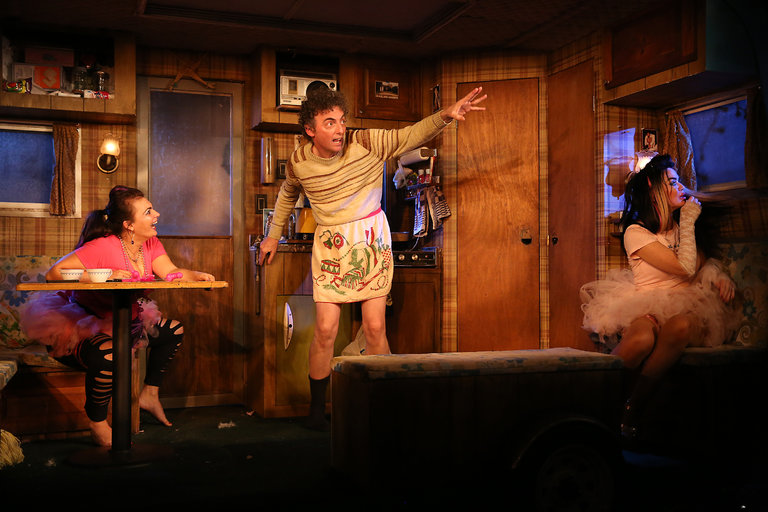 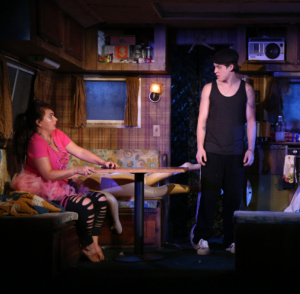 The Pigeon in the Taj Mahal 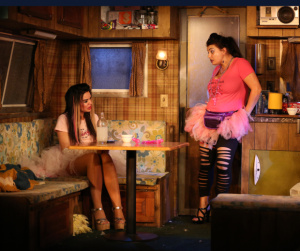 Rush to see “The Pigeon in the Taj Mahal” at the Irish Repertory Theatre (132 W. 22nd St. Chelsea, 212-727-2737, irishrep.org) before it closes this December 31st for its uniquely Irish verbal gymnastics; this convoluted and arcane wordplay makes it worth catching. Within a relatively streamlined two hours, the words spoken by this odd quartet reveals more than just offbeat slangy patter; it presents both a lost inner world and the isolated world of Ireland’s West Country lifers.

When Eddie The Pigeon (John Keating) first appears on stage — a skeletal drink of water with a graying afro rooted on his head — his repetitious babble suggests someone with Asberger’s syndrome. His lives in a decrepit Winnebago — a home once shared with his now-deceased mother — surrounded by Elvis’ music and photos, and not much more. He works as a junkyard security guard and does little else, that is, until the night Lolly (Laoisa Sexton) lands on his doorstep, dropped off there while in a drunken, battered stupor.

Set in a rural trailer park, these two seem to be from very different cultures yet when they confront each other that night they connect in odd ways. He represents an older world of winding roads and lost pathways that not even tourists visit. Though she’s steeped in contemporary accouterment like i-phones and contemporary pop music, Lolly also comes from another kind of isolated life, one of poverty and the seemingly dead-end scene of drunken partying and mutually abusive long-term relationships.

Once Pigeon carries her into his hovel, where she’s revived by a spot of hot tea, the banter shifts from monologue to a dialogue of sorts — two conversations sometimes intersecting, other times passing by with shared misunderstanding. Clearly, he’s excited to find a young woman in smeared makeup and ripped tulle; he exclaims, “You have the uncommon beauty [of] a swan in a dirty lake!”

Dressed like a rumpled-yet-glittery punk-ified bride, Lolly wakes from her addled state acting aggressive yet also intrigued. At once threatening and manipulative, she alternates between being a waif and seductress who can’t quite get a handle on her mark. And when her pal Auntie Rosie (Zoë Watkins) arrives in an equally shattered-and-tattered state, frenzied interplay ensues. Within the banter lies both comedy and pathos. The dynamic between both camps — one lost in the past, the other in the present — highlights how both have become disconnected from realities that urbane city dwellers like us New Yorkers — are normally linked to. 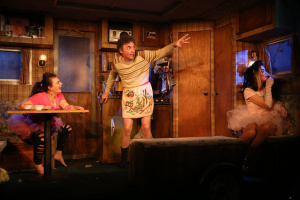 In a funny way, there’s a relevance to this play, as if it’s about people who could be considered the “deplorables” especially once coke-head boyfriend Johnny (Johnny Hopkins) arrives to retrieve his consort/victim and joins in on the “dis-assemblage.”

Without stating any profundity here — especially because not much really happens  — Sexton’s clever text and Alan Cox’s tight direction keeps the shambling conversation going. While they don’t really say anything that substantial, they survive in their various addled states without knowing exactly what to say — or think. They just drive forward without much reason or purpose but somehow we, as an audience, get it. “The Pigeon in the Taj Mahal” shows just how much these four people, and those whom they represent, try to survive — at least through this one night.

The Pigeon in the Taj Mahal