Yankee Doodle Dandy! To Be Released 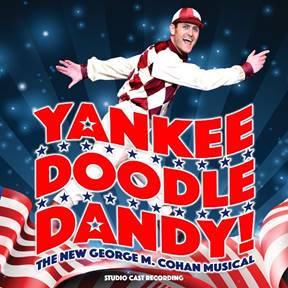 Yankee Doodle Dandy! To Be Released

Broadway Records announced today the Studio Cast Recording of Yankee Doodle Dandy! will be released digitally and in stores on Friday, September 6, 2019. The album is currently available for pre-order at www.BroadwayRecords.com.

The life and times of legendary showman George M. Cohan explode into the 21st century in this sensational new musical. Set against the colorful backdrop of “old Broadway,”Yankee Doodle Dandy! is the story of a of a brash, and rebellious kid who grabbed the American Dream and almost single-handedly invented the Broadway musical.  From the hard-knock days of his family’s adventures on the vaudeville circuit to his reign as the star-spangled “King of Broadway,” Cohan’s life was a roller coaster ride of professional highs, lows, personal triumphs and heartbreak. With classic songs including “Give My Regards to Broadway,” “You’re a Grand Old Flag,” “Harrigan,” and new songs inspired by unfinished Cohan melodies, Yankee Doodle Dandy presents a fresh, contemporary view of a musical theater icon who has influenced every musical on Broadway today.

David Armstrong (Book) is the Artistic Director Emeritus of The 5th Avenue Theatre in Seattle. During his 18-year tenure, he guided The 5th Avenue to a position as one of the nation’s leading musical theater companies, acclaimed for both its development and production of new works and its innovative staging of classic musicals. He made his Broadway directing debut in November 2012 with the musical, Scandalous (which started at The 5th Avenue as Saving Aimee). Mr. Armstrong’s work has been seen in New York, Los Angeles, and at regional theaters, The Kennedy Center, Ordway Center for the performing Arts, Cincinnati Playhouse and New Jersey’s Paper Mill Playhouse. From 1990 through 1995, he served as artistic director of Cohoes Music Hall in upstate NY. He has also written the books for the musicals The Wonder Years (winner of seven Drama-Logue Awards), Gold Rush, and Yankee Doodle Dandy!

George M. Cohan (1878-1942) rose to the top of his field as an entertainer, songwriter, playwright, and producer with virtually no formal education. No one in theatrical history ever did as many different things as well as George M. Cohan. As the father of the modern Broadway musical, Cohan dominated American theater to a degree that has never been matched by anyone since. He grew up in the business, touring with his family “The Four Cohans.” In his 20s, Cohan conquered Broadway, writing, directing, and starring in fast-paced shows that made America—not Europe—the standard-setter for musical theater. Cohan’s songs are pure Americana, and he was honored with a Congressional Medal for his contributions to the American spirit. His life inspired the film biography Yankee Doodle Dandy!