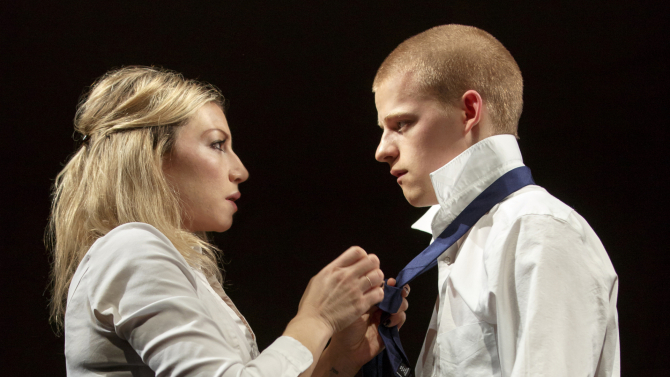 Yen: Fabulous Acting Yet The Play Left Me Wanting

Yen: Fabulous Acting Yet The Play Left Me Wanting 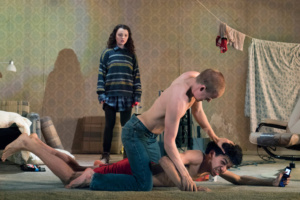 The acting in Anna Jordan violent drama Yen, night at the Lucille Lortel Theater is exquisite, but I wish for these actors a better play. 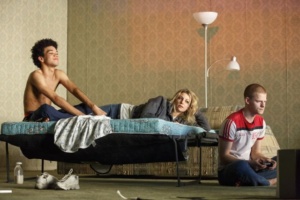 Set in a dilapidated flat somewhere in the suburban of the London housing projects, 16 year-old Hench (Lucas Hedges) and his half brother 14 year-old Bobbie (Justice Smith) have been all but abandoned by any kind of adult care giver. They share a shirt, have no food, sleep on a pull out couch, together, yet have an up to date laptop Apple computer, play station and TV. When we first meet them they are watching porn. Clearly something is wrong with Bobby. Is it ADD, ADHD, or worse? I don’t exactly know, as that is never said. They are wild animals, feral due to their alcoholic, drug-using mother Maggie (Ari Graynor) who only shows up to steal what little they have. She has Bobby steal her alcohol instead of the food or clothes they desperately need. Maggie lives with her abusive boyfriend. Hench’s father was a pedophile who is in jail and Bobbie’s father was drug addict who died with a needle in his arm. Bobbie is obsessed with a fairytale version of his father’s death and acts like he is three, wanting to cuddle with his mother in ways so inappropriate. The two have a dog Taliban who they have not feed or cleaned up after. One day the girl Hench has been silently pinning for, 16 year-old Jennifer (Stefania LaVie Owen) shows up. She has come to rescue Taliban with dog lead in tow. When she sees how damaged Bobbie is she becomes both mother and friend, bringing the much-needed food and camaraderie. Jen’s father has recently died, who she sorely misses. Her mother and her have moved from Wales to live with relatives. When Maggie shows up she resents Jen. The next day she takes Bobby to live with her and her boyfriend. Jen and Hench decide to go to Wales. Needing comfort Jen offers herself to Hench, who does not know how to touch her. He lies and uses the fairytale story to tell Jen who his father was. Hench also has bad dreams of his past abuse and when he does he wets the bed. He does so with Jen and is so embarrassed he turns on the young girl. From there everything goes down hill. 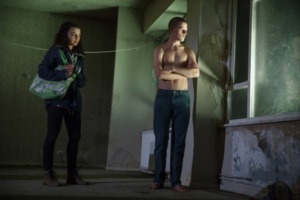 As Hench, Mr. Hedges is so believable as an adolescent on the edge of sanity. His inability to vocalize his emotions, shows on every fiber of his being. This is a child who wants desperately to connect but is lost in the misery of not being able to function. Mr. Hedges, is making his theater debut in Yen. Mr. Hedges is nominated for an Academy Award for best supporting actor in the Kenneth Lonergan’s “Manchester by the Sea,” in which he gives an outstanding performance. Mr. Smith (of “The Get Down” on Netflix), is an explosion of hyper kinetic energy, as he bounces off walls. Stefania LaVie Owen, is the perfect blend of burgeoning sexuality and innocents. Finally Ms. Graynor as Maggie, makes you hate that parenting is not denied to people like this. She is the perfect case for sterilization. She has not only messed up her life but her children never stood a chance. Yet at the same time when she is sober enough you can actually see that she does care. 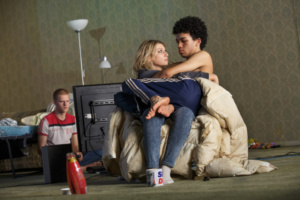 Trip Cullman has directed this piece with physical agility. The most effective parts of this play are when the least amount of dialogue is spoken. The scene where Jen teaches Hench about touch is the most powerful scene in the whole play.

Mark Wendland’s set as oppressing as is Ben Stanton’s lighting. The videos by Lucy Mackinnon are so jarring and hyperkinetic that you feel as if you are on a one-way ride to purgatory.

Ms. Jordan’s play lacks in so many ways. First of all it is predictable. Second she never answers the questions the audience longs to know. What happened to Hench? What is really wrong with Otto? How are the two boys and the dog surviving with no food? How isn’t welfare down on their case for not being in school? How long has this been going on? How does Jen survive and why does she come back? And most importantly why make us watch something this horrible? There is a piece of my soul I will never get back and for what? This play taught me nothing or told me anything except these actors are all skilled and extremely gifted.