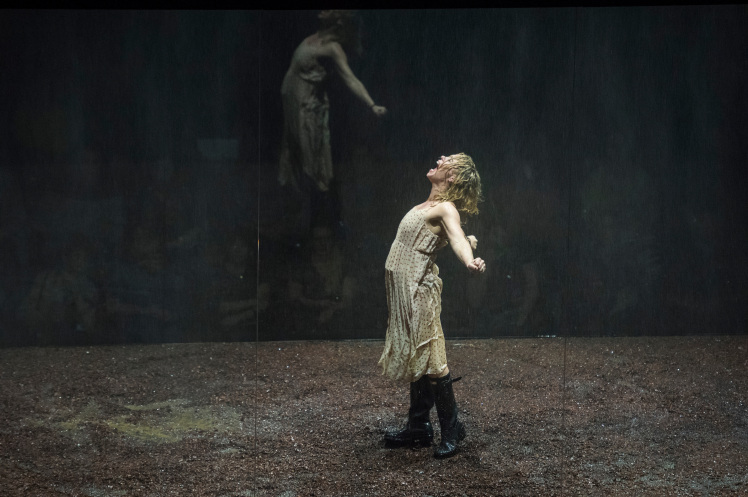 Are we being forced to look at ourselves as soon as we sit down in our seats at the Park Avenue Armory? Or are we being pushed to examine the world and the people within our society? It’s a compelling first few moments as we ponder what is before us, a looking-glass of some sorts, distorted and as wobbly as Billie Piper’s character as she descends into a pit of destruction and denial. It reminded me of that reflective surface that the film version of ‘Cabaret‘ ended on, forcing us to see a world view of what was happening in that moment of time, smacking us hard up against the wall of reality.  Federico Garcia Lorca’s tragic Yerma, the second play of the ‘Rural Trilogy‘ was first performed in 1934, interrupted by right-wing groups, but praised by the left for its honesty and modern outlook.  Simon Stone’s adaptation bares the weight of its history but drives it forward into the modern world of British culture and liberalism.  It encapsulates all the intricacies of desperation of the privileged, slanting the character that once was named Yerma, a Spanish word for ‘barren’, into the much more generic ‘Her’, who is unsure how to deal with the idea of not getting what she wants, smashing up against the glass walls of her predicament.  It’s a sad and horrendous journey to watch, especially as enlivened by Piper (National’s The Effect) and as coaxed through by director Stone (Hayloft Project’s The Promise) into a journey riddled with complications and reactions that will be forever etched into my brain.

Placed under a microscope for all of us spectators to dissect, Piper brings us a character that is full of life and subtle insecurities, wrapped in a package that looks all so good from the outside, but, in the same way we all are, she is flawed and troubled deep down inside.  Her love life advancing into a disconcerting entanglement with John, played stoically and solidly by Brendan Cowell (Barbican’s The Wild Duck) feel hopeful but clouded, untethered but attempting to find a nurturing piece of solid ground to plant roots in.  The chapters of their lives begin to play out, from 1-7 in quick dramatically surprising takes trapped inside a viewing space much like an aquarium or surgery auditorium, giving us the sneaky opportunity to observe as if they all are specimens in some strange experiment on human nature.  The magnificent set, designed brilliantly by Lizzie Clachan (Menier’s The Truth), is a quick change platform that almost magically drives us forward with intricate power and speed, diving into the deep waters of desperate desire. Without even realizing her need for motherhood at first, she drops down into a rabbit hole that slowly manifests into something inconceivably raw and painful inside of her body and soul.

Piper’s character is surprised at first by the Conception (#1) of her obsession, rising out of a nonchalant attitude for attachment, but from one deconstructed and brilliant cinematic cut to another, beautifully orchestrated to the sharp lighting design cues from James Farncombe (People, Places & Things) and ushered into place by the spectacularly disturbing music and sound design by Stefan Gregory (Theater Basel’s Engel In Amerika), with clear and concise video design by Jack Henry James (National’s Behind the Beautiful Forevers), her Disillusionment (#2) drives her into an escalating state of frustration.

The Moratorium (#3) of her existence is delicately maintained momentarily, but the Reality (#4) of her situation is exacerbate by each and every interaction and conflict she has with her emotionally detached mother, Helen, played exquisitely by Maureen Beettie (West End’s The Ferryman), her troubled and fertile sister, Mary, played heroically by Charlotte Randle (Almeida”s Medea), and her young office worker and fire-starter, Des, played to wild girl perfection by Thalissa Teixeira (Globe’s The Broken Heart).  There is Deception (#5)  in her relationship and in her perception, and a Descent (#6) into forced measures, particularly driven by interactions with her former lover, Victor, played with a sweet charm by John MacMillan (Almeida’s Hamlet), that can only lead to a Coming Home (#7) that is both painfully thrilling and ultimately disturbing on every emotional level possible. If Piper doesn’t rip your heart in two, I’d wonder if you left it at home with your babysitter.

The chapters fly by, and the anxiety mounts of Stone’s rearrangements of the classic Spanish tale spiral out with an exacting and pinpointed jab into the heart of Her pain and anguish.  Piper’s performance, heralded in London when it premiered at the Young Vic in 2016/2017, winning her six out of an available six Best Actress theatre awards, including the coveted Olivier Award, is earth shattering in its depth and complete free fall into pain and obsessional desire.  The madness that exists and rears up inside of her, trapped in the same manner she is on stage, unable to hear and interact with the outside world, is heart wrenching and devastating to witness.  Ricocheting off each of the glass walls that entrap her with a force that one is surprised they don’t shatter, but her confinement is scarily secure.  And the cast rise up heroically to her challenge meeting her in the terrain between the walls with an equal and sustainable energy, infusing us with all the clues that helped create these jailed walls.

Although the piece veers away incredibly from the classic tale, especially in the climatic scene, the overall impact is deafening.  Yerma is the play and Park Avenue Armory is the place, so go join Her there, and get a good look at yourself and those people that surround you.  You won’t be disappointed.