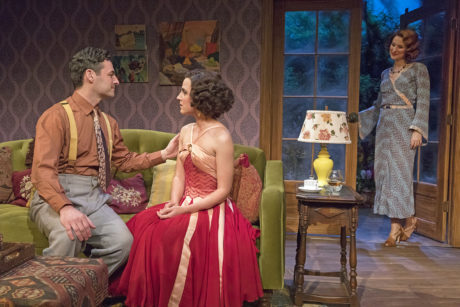 Yours Unfaithfully A Delightful Look At Marriage and Fidelity

Yours Unfaithfully A Delightful Look At Marriage and Fidelity 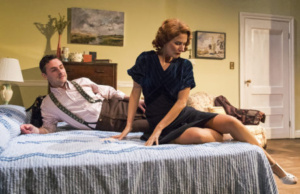 The Mint Theater Company’s production of Miles Malleson’s Yours Unfaithfully, was written 1933, but could have just as easily been written in the 60’s or even now.  This never produced play is a delightful look at marriage and fidelity. Yours Unfaithfully, follows one couple who thinks and then is tested in a philosophy, that infidelity and an open marriage is acceptable in a solid relationship. 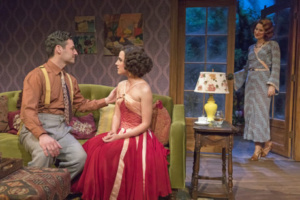 Stephen and Anne (Max von Essen and Elisabeth Gray), have been blissfully happy for eight years of marriage and are the envy of all their friends. They are totally committed to living up to their ideals which include an open marriage. When Stephen, a writer in a slump, begins to sink into a funk, his moodiness,  has Anne encouraging him to seek out a fresh spark. One of their dearest friends, Diana Streatfield (Mikaela Izquierdo), has just returned from abroad, after the death of her husband. Enter the spark. Now Anne who has cheated before with a family friend, Dr. Alan Kirby (Todd Cerveris) is jealous, now that the tables are turned. In the meantime Stephen’s father the Reverend Canon Gordon Meredith (Stephen Schnetzer) discovers the affair between his son and Diana. Now Anne, has to deal with not only her feelings of jealousy, but the fact that others know. This puts the marriage at stake, but in the end love saves the day.

Jonathan Bank staging is delectable as he keeps this drawing room comedy at a clip. The cast is exquisite with just the right amount of everything. Max von Essen who is mostly known for his musical work, is a surprising delight. He is perfectly paired with Ms Gray and Ms. Izquierdo. Even the two smaller roles are done to perfection. Malleson has a way with words and his look on sex, infidelity and open marriage is just as relevant today.

As always The Mint has out done itself with it’s scenic design by Carolyn Mraz and costumes by Hunter Kaczorowski. Even in this tiny space at the Beckett Theatre, Ms Mraz has created a country home and then a flat in London. Every detail done to completion. I highly covet Diana’s first act dress and shoes, which were scrumptious.

In a time when the world seems out of control, it was nice to be captivated and slip into another time and place. Make sure you catch this sublime endeavor.

Suzanna BowlingJanuary 24, 2023
Read More
Scroll for more
Tap
The Liar: An Un-Warranted Knee Jerk Reaction to Rhymes
Meet The Cast Of A Comedy of Tenors The Sequel To The Tony Award-Winning Lend Me a Tenor