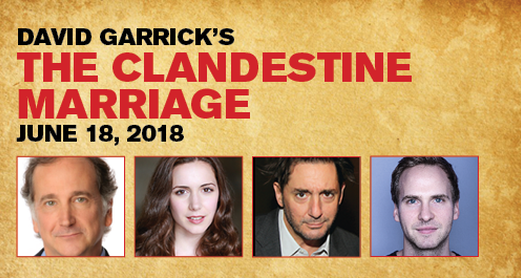 A juicy romantic thriller, in the rip-roaring tradition of The Revenger’s Tragedy, The Second Maiden’s Tragedy was resurrected from a single handwritten Jacobean manuscript, without title or author. The play tells the tragic tale of two sisters—known simply as Lady and Wife—each unwittingly caught in a love triangle and facing a test of her fidelity. But will both sisters pass? Inspired both by Talmudic legend and the story of a Christian martyr, the play features one of the most gruesome love suicides of the age, and a scene of necrophilia to boot. Almost never performed, this is a rare opportunity.

The Second Maiden’s Tragedy dramatizes a morbid narrative of unrequited desire, evoking the allegorical world of a morality play. The Tyrant, who usurps the throne, is in love with the Lady, whose heart is given to her true lover (and the true king), Govianus. After the Lady chooses to kill herself rather than surrender to the Tyrant’s desire, the Tyrant adorns and displays the Lady’s body in a desperate attempt to deny her death, and calls for a painter to restore her color with cosmetics. Govianus, in disguise, beautifies the body with poisoned paint, leading to the Tyrant’s fatal kiss. In the secondary action, Govianus’ brother Anselmus distrusts his Wife and persuades his reluctant friend Votarius to test her virtue. The Wife and Votarius begin an affair, which is revealed to Anselmus by the Wife’s maid. In attempting to persuade her husband that she is faithful, the Wife mistakenly stabs Votarius with a poisoned sword; the ensuing melee ends in the deaths of all the characters.

Thomas Middleton (1580–1627) – the author most often credited by scholars for this play – was an English playwright and poet. Born in London, Middleton was the son of a bricklayer who had raised himself to the status of a gentleman. He was five years old when his father died. His mother’s remarriage resulted in a fifteen-year battle over the inheritance of the children, an experience that perhaps accounts for Middleton’s repeated satirizing of the legal profession.  Middleton matriculated at Queen’s College, Oxford, in 1598, although he did not graduate. He began his literary career while still at Oxford, publishing three long poems, including a verse satire that was burned on the order of the Anglican Church. Like many playwrights of the time, Middleton collaborated extensively with others, including Thomas Dekker (The Roaring Girl), William Rowley (A Fair Quarrel, The Changeling). He also wrote a number of plays on his own, including his city comedy A Chaste Maid in Cheapside and probably The Revenger’s Tragedy. He also participated in revising Macbeth and Measure for Measure. Middleton’s friendship with Dekker brought him into conflict with Ben Jonson and George Chapman in the War of the Theatres. Middleton’s Inner Temple Masque (1619) takes a swipe at “silenced bricklayers,” believed to be a reference to Jonson, who was then away in Scotland. The conflict with Jonson continued as late as 1626, when Jonson’s play The Staple of News mocked Middleton’s A Game at Chess. Middleton was one of the busiest and most successful popular writers of the period, making his living primarily as a pamphleteer. He had no binding affiliation with any theater company, but rather wrote on a freelance basis for several of them. He was one of the few Renaissance dramatists to achieve success in comedy, history, and tragedy. He was also a prolific writer of masques and pageants. As a result of his involvement with civic pageants, he was appointed City Chronologer to the City of London in 1620, a post he held until his death seven years later (at which point the post was given to Ben Jonson). Middleton’s last known play for the commercial theater was the political allegory A Game at Chess (1624), which satirized the intrigue surrounding the Spanish Match (the controversial proposed marriage of Prince Charles, the son of King James I, to the Spanish Infanta Maria). Though Middleton’s approach in the play was patriotic, the Spanish Ambassador complained about the play and the Privy Council shut it down after nine performances. It is believed that Middleton was forbidden to write for the stage following this incident.  Middleton is best known for The Changeling (produced by Red Bull Theater in 2016) and for Women Beware Women (produced by Red Bull Theater in 2008), and is believed by many to have written the anonymous play The Revenger’s Tragedy (produced by Red Bull Theater in 2005.)

Red Bull Theater continues its OBIE Award-winning Revelation Reading Series, providing the unique opportunity to hear rarely produced classic plays performed by the finest actors in New York. This year’s readings highlight the season’s themes of love and all its joyous madness—with both Jacobean and French twists—alongside the perils of ambition and the threat of the con.

The two remaining Revelation Readings, which take place on Monday evenings (7:30PM) at the Lucille Lortel Theatre, are:

May 14 – Molière’s A Doctor in Spite of Himself, adapted by Christopher Bayes and Steven Epp, directed by Christopher Bayes with live music by Pornchanok Kanchanabanca, and starring Austin Durant, Steven Epp, Renata Friedman, Gabriel Levey, Don Darryl Rivera, Justine Williams, and Liz Wisan. What’s a girl to do, to avoid her unwanted wedding? Pretend she’s been struck mute, of course. And with the help of a dissolute, drunken woodcutter posing as her doctor, trick her rich old fool of a father. Masters of commedia Christopher Bayes and Steven Epp have teamed up to give uproarious new life to Molière’s classic comedy, with “their brilliant, new-vaudeville style,” making it “both raunchier and more unhinged,” (New York Times). It’s Punch and Judy come to life, in this pitch-perfect presentation, punctuated with live music.

June 18th – The Clandestine Marriage by David Garrick and George Colman the Elder, directed by Marc Vietor, starring Mark Linn-Baker, Talene Monahon, Reg Rogers and Ryan Spahn. Wealthy merchant Mr. Sterling tries to better his social standing by marrying his eldest daughter Betsy to Sir John Melvil. Just one problem: Melvil is in love with the younger daughter Fanny, who happens to be secretly married to the humble clerk, Lovewell. And it’s up to Lovewell to convince Melvil to look elsewhere. Set in the finely landscaped garden of Sterling’s country home, it’s effervescent comedy of manners at its finest—co-authored by David Garrick, famed actor-manager-playwright of London’s great Drury Lane Theatre, where the play first delighted audiences.

Red Bull recently announced the cast for their next mainstage production, the Off-Broadway premiere of David Ives’s The Metromaniacs, directed by Michael Kahn: Noah Averbach-Katz, Christian Conn, Adam Green, Peter Kybart, Adam LeFevre, Amelia Pedlow, and Dina Thomas. The Metromaniacs, which will open at The Duke on 42nd Street (229 West 42nd Street, between 7th and 8th Avenues), will begin performances April 10th with Opening Night set for April 22nd. The Metromaniacs is the third play from the successful partnership between director Michael Kahn and David Ives and the third play in Ives’s series of rediscovered French comedy masterpieces, following The Heir Apparent (2011) and The Liar (2010).  This limited Off-Broadway engagement will run through May 26th only. To purchase tickets for The Metromaniacs visit www.redbulltheater.com.

Red Bull Theater’s work has been recognized with multiple Drama Desk, Drama League, Lucille Lortel, Callaway and OBIE Award nominations and awards, including the Off-Broadway Alliance Award for Best Revival in the 2015-’16 season (School for Scandal). The company has staged over 150 Revelation Readings, named by the Village Voice “Best Play Reading Series,” also developing new plays of heightened language and classical adaptations through workshops and offering educational programs for students of all ages, including Shakespeare In School residencies. Post-play Bull Session discussions with scholars following select Sunday matinees and Readings are free and open to the public.

Red Bull Theater offers Master Classes throughout the year. Taught by top working professionals including Kathleen Chalfant, Sam Gold, John Douglas Thompson, Olympia Dukakis, Heidi Griffiths, Charlayne Woodard and Patrick Page, Red Bull Theater’s intensives and workshops cover a variety of disciplines, including auditioning, text, voice, movement, clowning, stage combat, and acting Shakespeare.  Classes are open to adults at all levels of training or experience. They range from one to four days with limited class sizes to allow one-on-one attention. You can enroll in any combination of classes, or take the whole series for a year-long training experience.

For tickets and more information about Revelation Readings, or any of Red Bull Theater’s productions and programs, visit www.redbulltheater.com.

Suzanna BowlingJune 23, 2022
Read More
Scroll for more
Tap
Noises Off An Old Chestnut at the Walnut
Tickets for Puffs: Filmed Live Off Broadway