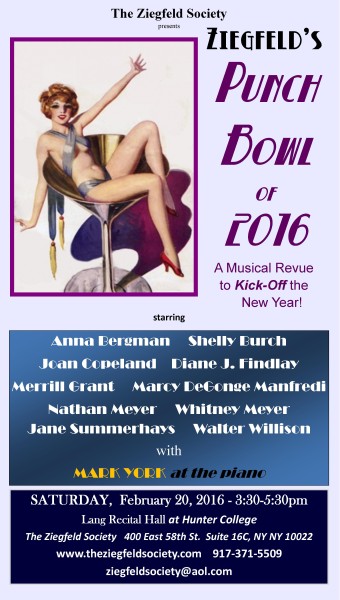 The concert, which honored George Gershwin who composed the scores for Ziegfeld’s Show Girl and Rosalie, featured  performances of Gershwin classics including “By Strauss”, “Do It Again”, “He Loves and She Loves”, “I’ve Got a Crush on You”, “Liza”, “Oh, Lady Be Good”, “Someone to Watch Over Me”, “Summertime”, “They Can’t Take That Away From Me”, with lyrics by his brother Ira Gershwin and others.

All proceeds benefit The Ziegfeld Society of New York City, a not-for-profit organization that aspires to enlighten, entertain and educate current and future generations of theatergoers and young artists about the legendary performers, songwriters and creators of our vast musical theater heritage. Monthly performances feature Broadway stalwarts performing alongside young up-and-coming artists as well as presentations by authors and screenings of lost film and television musicals.

Suzanna BowlingJanuary 5, 2023
Read More
Scroll for more
Tap
King Kong Could Soon Be On Broadway
My View: The Dessert Was The Problem At The Friars Club Last Night