He Says: The Public’s Ain’t No Mo’ Fills Us Up 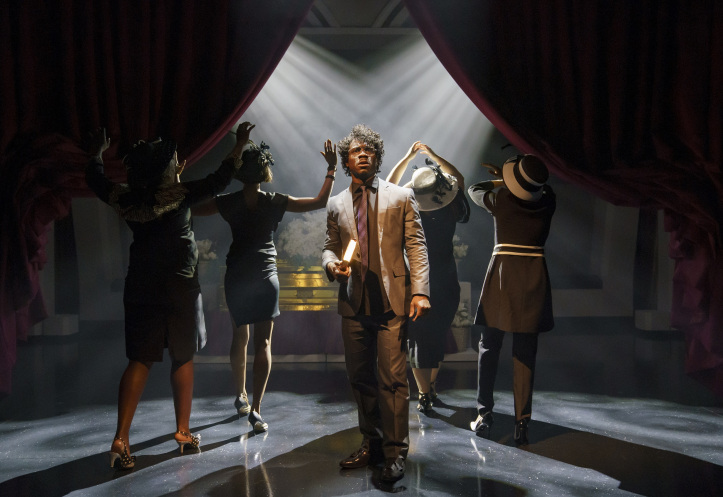 He Says: The Public’s Ain’t No Mo’ Fills Us Up

The Right to Complain died back on that historic day, when that black man, Barack Hussein Obama became the President of these United States, or so the wailing and carrying on gaggle of mourners thought in the first vignette from the satirical and devilishly funny Ain’t No Mo’, a piece of surprising power stuffed inside a laugh out loud flight of fancy by Jordan E. Cooper (“americanmother“) currently taking off at The Public Theater. As directed with a flash and a smile by Stevie Walker-Webb (a former 2050 Fellow at NYTW), the cast of 6, five passengers and the wildly inappropriate and utterly fantastic Peaches, played to the skies by playwright Cooper, feasts its eyes on the prize and delivers the goods with style and hilarity. At first it flails around in over the top camp within a sketch comedy television show structure, but it quickly shows its smarts underneath the wild symbolic gesturing, and jabs at all things, including transracial prejudice, abortion, police shootings of black men, and freedom. “Smell that“, is all she can ask.

The writing and the ideas within, are snapped on perfect, detailing a troubling times for race relations in America, especially when looking towards the current White House and its cast of KKK-ronies. The cast, made up of Marchánt David (Public’s The Fever), Jennean Farmer, Fedna Jacquet (Daryl Roth’s Gloria), Crystal Lucas-Perry (LCT’s Bull in a China Shop), Ebony Marshall-Oliver (Dallas Theater’s Dreamgirls), and Simone Recasner (Pittsburgh’s Pride and Prejudice), find the exacting flavor to get in the last word. On a television variety show-like set, by designer Kimie Nishikawa (PR’s The Revolving Cycles…), with outrageous costuming by Montana Levi Blanco (TNG’s Daddy), direct lighting by Adam Honoré (CSC’s Carmen Jones), solid sound by Emily Auciello (EST’s Mope), and stupendous work by hair, wig, and makeup artist, Cookie Jordan (Broadway’s Once on this Island), Ain’t No Mo’ sometimes mist-fires and stumbles over its self to make a point, but the satire always seems to be able to right itself up on those high heels. Cooper’s Peaches doesn’t “know easy“, but what the two know is the truth, and alongside convict Blue, they push and pull forth idea after compelling idea with wise power, finding the funny in the pain and disappointment of our current situation. This flight should be full, but I’m glad I got my ticket. And don’t worry Peaches, I ain’t looking back.