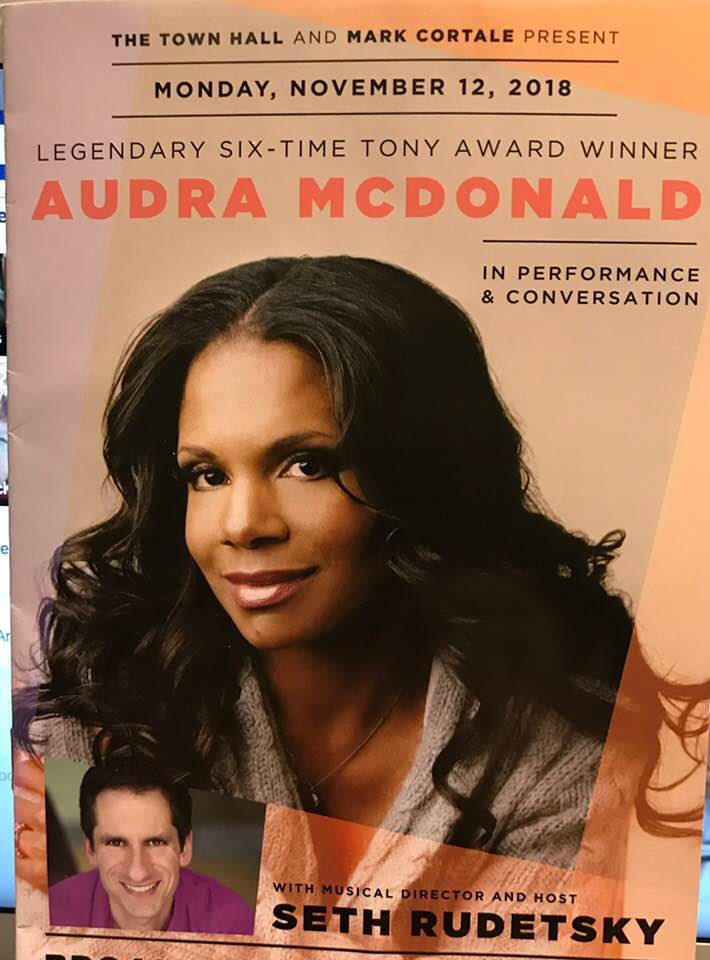 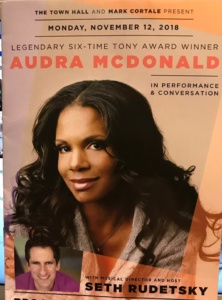 On of the most exquisite nights I have spent in a theatre, was Monday night when Seth Rudetsky presented Broadway @ Town Hall with six-time Tony winner Audra McDonald. These two friends with a 30 year old history, dished about music, backstage fodder and life, while Audra lent her voice to some glorious music. We learned how she was expected to go into opera at Julliard, but her heart was more into musical theatre. 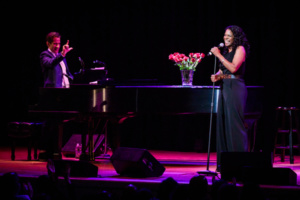 First up was “I Am What I Am” from La Cage Aux Folles as Audra’s childhood in Fresno comes into play. “Fres-yes!” the witty actress stated. What I learned that night was how amusing Ms. McDonald is. Hyperactive as a kid she poured out her energy into dinner theatre and a high school for the arts. She audition for Juilliard because an upperclassman had done so and was revered for it. During her trip to audition for Juilliard, McDonald saw Into the Woods with Phylicia Rashad, because the actor playing Cinderella’s prince was also from Fresno. McDonald wrote a letter to Bernadette Peters she thought he could deliver. She felt a simpatico relationship with Peters because they both had curly hair. Sadly she never answered. We were treated to a medley of “Children Will Listen (Into the Woods) and You’ve Got to Be Carefully Taught” from South Pacific. Ms. McDonald’s clear vocals were emotionally connected to the lyrics. 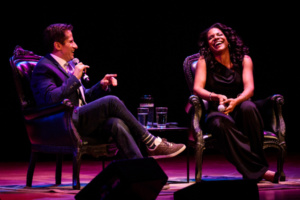 Audra’s happiest day at Julliard was when Barbara Cook came to teach a master class. She did not sing for Cook, but the two did become friends and perform together later in life. For that segue we were treated to “Vanilla Ice Cream” from She Loves Me. 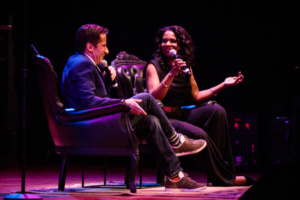 On the night of the Tony Awards when Audra, Norm Lewis, David Alan Grier, and Philip Boykin were up for Porgy and Bess, a chatty Liza Minnelli stopped by. With little time to spare to get ready and rush over to the red carpet McDonald was at a loss to tell her idol she had to leave. “Maybe This Time” from Cabaret lead into a hilarious “The Facebook Song” by Kate Miller-Heidke. What a seriously fabulous song.

When getting to meet her idol Barbra Streisand, the funny girl was none to nice, not once but twice. Since then the two have become friends as Audra belted out the “Cornet Man” from Funny Girl.

Rudetsky decided to punish Audra as they have a disagreement about how they met. McDonald is convinced they met during auditions for a production of Evita in Bucks County. So…..Rudetsky disagrees, had her sing an Evita medley with Rudetsky singing one line, and McDonald finishing the musical phrase.

McDonald related that as a child when cast as the witch in Hansel & Gretel, McDonald asked if after the Witch dies, she could come back and sing a song. The teacher said yes, even though this was a play not a musical. As a result the audience was treaded to an emotional version of “The Rose”.

At the Sondheim Gala she sang “The Glamorous Life” from A Little Night Music, however at the PEN Gala honoring the Tony-winning songwriter McDonald went up on the lyric because she saw how big her mouth was on video screens that had not been there during the sound check. She sang it perfectly on Monday.

Having just heard “I’ll be Here” from Ordinary Days, I was thrilled to hear Audra sing it. Audra the night before sang “Climb Every Mountain” from The Sound of Music who had just sang it for the memorial in tribute to Craig Zadan.  Zadan was the one who felt she should be cast as Mother Abbess.

As an encore “Summertime “from The Gershwins’ Porgy & Bess unplugged. What a musical high and a thrilling way to end the evening. What a fabulous New York night.

Seth returns January 12th with Kelli O’Hara and on March 11th with Jeremy Jordan. These are concert not to be missed, as they are more of events. For tickets and/or more information, visit www.thetownhall.org.