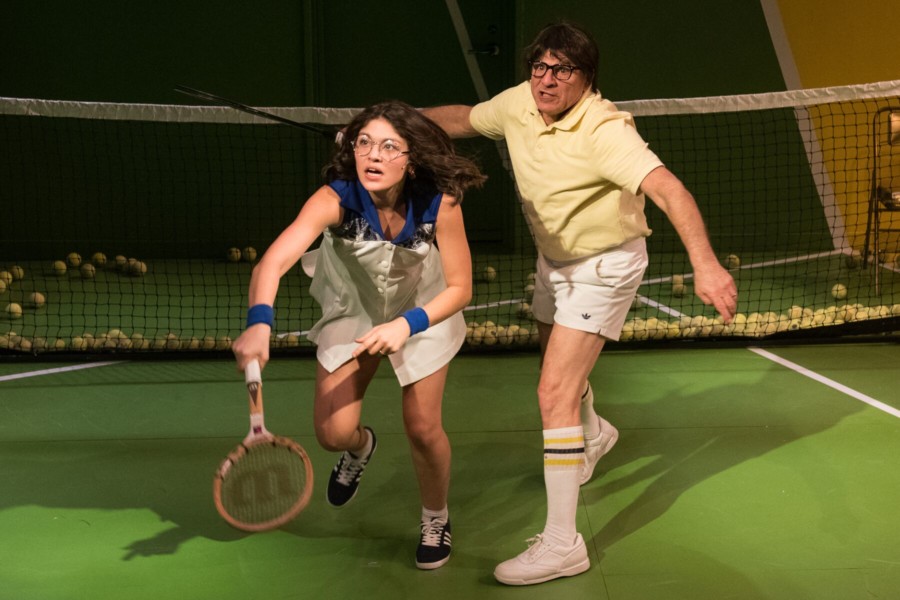 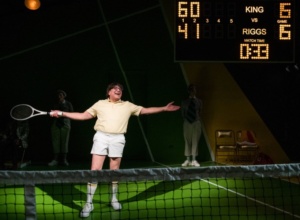 Ianthe Demos and Nick Flint’s direction of the new off-Broadway play Balls, which opened tonight at 59E59 is exquisite and makes this “battle of the sexes”, oh so watchable. At the center of the drama is the historic tennis match between Billie Jean King and Bobby Riggs. Kevin Armento and Bryony Lavery who wrote the piece, show duality in many forms. Unlike most PC correct, contemporary pieces, Balls, does not shove it’s agenda in your face. It shows the conflict of the current headlines, King’s fight against gender discrimination, Riggs good old boy’s mentality, our obsession with celebrity, racial bias, L.G.B.T.Q. rights, age discrimination, the response to the election of President Donald Trump and so much more. The script has the script, which has multiple narratives all happening at the same time. 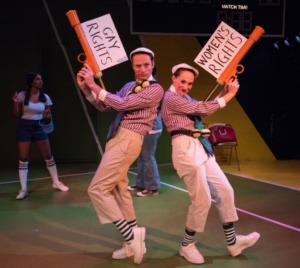 One Year Lease Theater Company and Stages Repertory Theatre the genius’s behind Balls wanted the show physically driven, and re-staging the entire tennis match, which took place in 1973 at the Houston Astrodome. Riggs, spouting hurtful sexist remarks at female athletes, challenged King to a tennis match before thousands of people in person and on TV. They were both tennis champions, and Riggs, almost as a publicity stunt, wanted to see if the best female athlete could beat him. 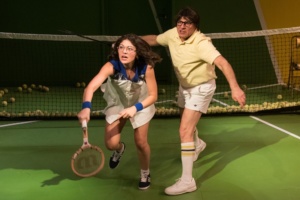 The show starts at the very beginning with the conflict between Adam and Eve and how everything started and ended with balls. At the crux of the play is 29-year-old Billie Jean King (llen Tamaki ) and 55-year-old Bobby Riggs (Donald Corren a dead ringer for Riggs) “battle of the sexes.” 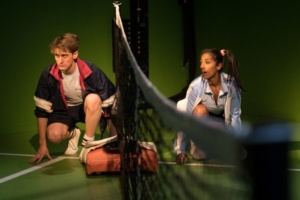 Representing real life Ballboy (Alex J. Gould) and Ballgirl (Elisha Mudly) whose relationship goes from flirting, to marriage, to a divorce as they deal with fidelity (hers), wife vs. career, abortion, death and being attracted to the opposite sex. 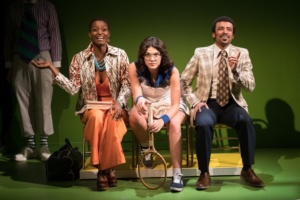 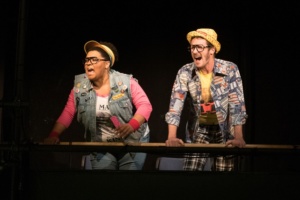 Add into the mix add brother and sister tennis fans Cherry (Cristina Pitter) and Terry (Danny Bernardy) representing how genders stick together, until the revelation of Billie Jean being gay changes that. 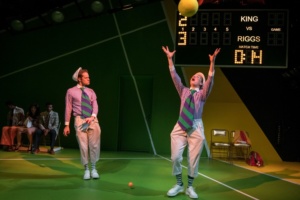 And for good old comic relief the clowns or unp’s (Richard Saudek and Olivia McGiff) who are in their own battle of the sexes.

Events of the time such as the Roe v. Wade, Barbie’s 14th birthday, George Forman and tennis champion Chris Evert (also played by Mudly). We follow Evert’s marital failures, as she explains living in a fish bowl was not conducive for a lasting relationship. 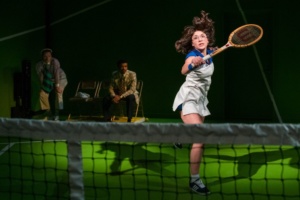 The actors are all talented and with the staging surrounding us, at times it was hard to know where to look. I did find it manipulative to cast an African American as Marilyn Barnett. Though the actress was moving, it became more of a civil rights issue and not what is was. Also there were several references to Billie Jean’s hair and Ms. Tamaki’s did not fit the bill. Why not use a wig, as they did with Riggs?

The set design by Kristen Robinson was a movable literal tennis court complete with seat cover to give the full effect. Kenisha Kelly’s for the most part historically accurate costumes put us into the era.

Kevin Armento and Bryony Lavery’s script asks us to contemplate where the lines are drawn. Thankfully they let us draw our own conclusions and I am sure I will be pondering this much longer that after this review. Have things gotten better? No! They have such circled around. Right now we are at the break point with a double fault, however the ace is always in our corner.

Balls is clever, intelligent and so far one of the best plays of the season.