CSC and August Strindberg: Why Are We Not Doing New Plays? 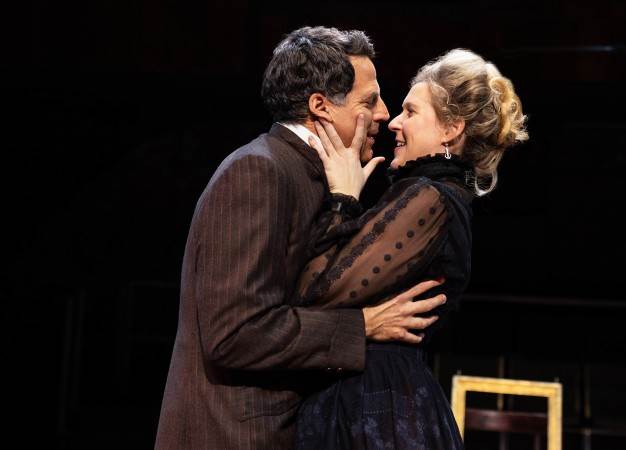 CSC and August Strindberg: Why Are We Not Doing New Plays?

Like O’Neil, Swedish-writer August Strindberg’s spiritual conflicts and intent are being reinterpreted and reexamined by adaptors. Over at Classic Stage Company (CSC) Yael Farber’s version of Mies Julie and Conor McPherson’s take on The Dance of Death, are running in rep.

Dance of Death, is the story is about a man Edgar (Richard Topol ) and wife Alice (Cassie Beck) who hate each other and are brutally and ferociously vicious towards each other with words and deeds. Trapped in a miserable marriage, they’ll be celebrating their 25th wedding anniversary. Edgar, is a retired artillery captain and a tyrant while Alice, a former actress. Living on an isolated island, and are not popular or social. Their children do not live with the them. The parents has turned the children against the other parent. Edgar is having heart problems and may not have long to live. Alice sometimes plays the piano as her husband dances a kind of bizarre saber dance. As he dances, she hopes it might kill him, and he threatens to cut her out of his will.

When Alice’s cousin Kurt (Christopher Innvar), visits he learns that the captain worked with Kurt’s former wife and because of it lost custody of his son in his divorce. Kurt and Alice join forces to plot against her husband, and the cousins’ relationship becomes sexual, as Alice wants him to kiss her foot, while Kurt talks of bondage, and bites her like a vampire.

As the play progresses secrets are unearthed. Old wounds are incidiously ripped open, as they fester bubbling beneath the surface.

Under the direction of Victoria Clark, the Tony Award winning actress in Light in the Piazza, Dance of Death, lets us feel the hellish torture of this unfilled union. She has directed her excellent cast with aplomb.

Richard Topol as Edgar is arrogant, droll, devious and because he feels his life slipping away wants to take everyone down with him. Ms. Beck is as just as sly and as shrewd as Edger and we see the girl who resentment that she gave up her beauty and talent. Christopher Innvar, is the perfect man caught between these feeding feral creatures.

Yael Farber’s Mies Julie is less successful. The play is now placed in South Africa instead of Sweden. The action still takes place in the kitchen on the eve of a celebration. Julie (Elise Kibler), is still the wealthy landowner’s daughter who has a crush on her father’s servant now named John ( James Udom). Julie comes onto John and after trying to avoid her advances, Julie finally seduces him and as this man who seemed to love her back turns vicious. Julie sees herself being pregnant and running away together. John however sees this as a way of getting his ancestors land back. Without ever being political Mies Julie has become a rebellion of the present-day political situation in South Africa. Where before it was about class and the have’s and have nots’.

In the original version Julie is raised by her late mother to “think like and act like a man”. Here her mother ignored her and committed suicide when she was young. This Julie has never felt loved and is incredibly betrayed when John turns on her.

The servant Christine who Jean (John) is sleeping with, has been turned into John’s mother (well payed with soul by Patrice Johnson Chevannes) and a ghost from the past (Vinie Burrow ) has been added.

Shariffa Ali’s direction is brutal. There are no prisoners bared. We see the sexual copulation of Julie and John. We see the suicide of Julie by scythe, becoming the dog she had aborted.

In watching this play, all I could think of is why not write your own play? Why take the intentions of one playwright and twist them to your own whims. We no longer value the playwright and because of this new voices are muffled and the one who created masterpieces are manipulated to fit the current political climate. Sometimes it works, sometimes it does not. Though this production says a lot and has masterful performances, it not what the original playwright had to say.

Mies Julie in rep with The Dance of Death: Classic Stage Company. until March 10th