“Halfway Bitches Go Straight to Heaven”, but Not Before They Have Their Say 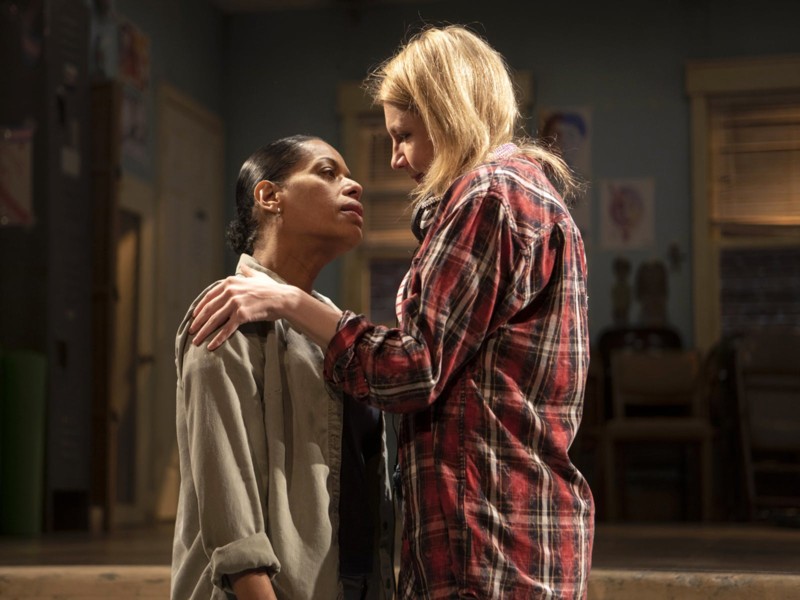 “Halfway Bitches Go Straight to Heaven”, but Not Before They Have Their Say

Stephen Adly Guirgis’ “Halfway Bitches Go Straight to Heaven” has a fittingly vulgar title to match the whip-cracking dialogue that will sizzle and embed itself down to your bones. This three hour long look at life is co-produced by the Atlantic Theater Company and LAByrinth Theater Company. This large ensemble is set in a halfway house for troubled women. The plot is nil, just the everyday life of the staff and occupants of Hope House, a government-funded residence for women in New York City.

They aren’t angels; many are addicts to alcohol or drugs and they have all been battered. Sarge (Liza Colón-Zayas), a vet, is in a relationship with Bella (Andrea Syglowski), whose abusive alcoholic husband is still stalking her. She is in the residence with her infant son, but she is also an addict. Bella is friends with Venus Ramirez (Esteban Andres Cruz), a transgender woman who shoots up with her. Sarge has a short fuse and is not fond of Venus stating, “You know there ain’t but so many beds for women in this city—and right now, this tranny bitch’s junkie man-dick is taking a real woman’s bed—and costing a real life woman her real life!” She may not be right in her reasons, but in the end she is right on the overall picture. Venus will escalate destruction, yet still offer humanity to Betty Woods (Kristina Poe), who hates her own imperfect body. These are just a handful of the residents.

Even the woman in charge, Miss Rivera (Elizabeth Rodriguez), cares immensely about these women, but suffers from her own dependence on alcohol. In a sense, battered men and women are people you may not realize you know in real life, but, on average, nearly 20 people per minute are physically abused by an intimate partner in the United States. During one year, this equates to more than 10 million men and women. So, there’s a fair chance you do.

Guirgis’ play sheds light on the true meaning of what real life people in a real life situation go through in a way that creates a sense of understanding and humanity, rather than the unfortunate dismissive judgment of many individuals. You may not want to see this slice of life in reality, but Guirgis’ lays it down bare in this case.

Suzanna BowlingJanuary 18, 2023
Read More
Scroll for more
Tap
Eleanor’s Very Merry Christmas Wish The Musical – A Newbie Worth its Weight in Gold
The Morality of Judgement Day or The Agility of Moving Vast Amounts of Sets To and Fro