He Says: Halfway Bitches Go Straight to Heaven, with a Stop Midway 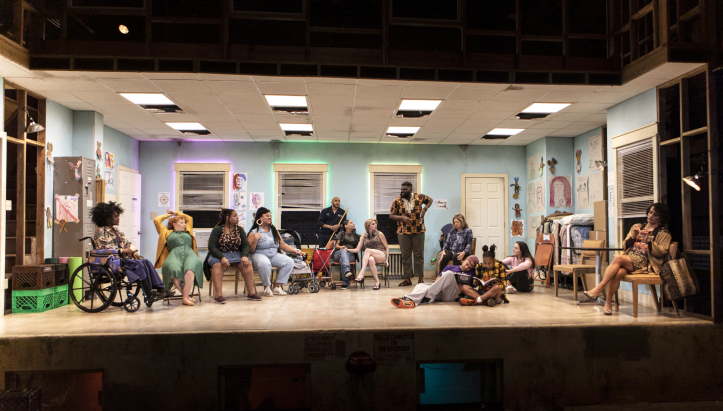 He Says: Halfway Bitches Go Straight to Heaven, with a Stop Midway

Struggling against all the issues of today; misogyny, privilege, addiction, mental illness, criminality, transphobia, and sexuality confusion, Stephen Adly Guirgis’s new play, Halfway Bitches Go Straight to Heaven climbs across the divide with wise authentic language and hard believable characterizations. It slaps and drives upward with a straight-forward brutality of clear minded banter, straight from the true-to-life situations presented. All the stereotypes are present, but delivered without the staleness of the obvious, which is a feat in itself, as the cards are played with obvious intent, but each card has found its own purity of vision.

The cast, filled to the brim with detailed explicitness, sits back and listens in that first tense exploratory scene, gathering themselves in a messy half circle of chaotic group dynamics. It seems haphazardly run (and it is, from this psychotherapist/social worker’s perspective), but the intentions by the talented crew are pure, especially as we are slapped with a strong dose of internalized pain by the youngest member of this pack of brave female survivors, Little Melba Diaz, played strongly by Kara Young (Duke’s Revolving Cycles…). She rhymes out her tragic backstory with a purity of vision and deeply felt misfortune. It’s hard to sit back and listen at times to her story, as it is when we learn, one by one, the events that have brought each one of these characters to this place and time, and even though I wasn’t in the frame of mind to indulge these women when I was at the Atlantic Theater over the holiday season, I couldn’t help myself to be moved and disturbed. They have all managed somehow to find some sort of safety in this women’s shelter – described more as a refuge, not a destination – from the outside world of violence and oppression, and in their pain and safety, we find enlightenment and disruption.

It’s not funded well, this safe haven for abused women, particularly with their security systems, but thanks to the determined staff, particularly the interestingly well-formulated Father Miguel, strongly portrayed by David Anzuelo (Northern Stage’s Our Town) and the straight talking director, Miss Rivera, wonderfully constructed by the talented Elizabeth Rodriguez (Broadway’s The Motherfu**er with the Hat), the place feels as real as one can image. This is a complicated space, just ask the out-of-her-element social worker, Jennifer, deftly portrayed by Molly Collier. The center is filled to the edge with anger and loving care, even though the set, designed by Narelle Sissons (Public’s Julius Caesar), with costumes by Alexis Forte (Signatures’ Our Lady…), lighting by Mary Louise Geiger (TACT’s Three Wise Guys), and sound/original compositions by Elisheba Ittopp (Baltimore Center’s Men on Boats) overflows outward and upward with a fussy and overworked intentionalism.

The tough tempered Army vet, Sarge, played with force by the magnificent Liza Colón-Zayas (NYTW’s Mary Jane), jumps forward flinging a verbal violence towards a trans women, Venus, played with determination by the wonderful Esteban Andres Cruz (Steppenwolf’s Domesticated). Claiming that Venus has no right to be in this shelter, Sarge attacks with a vengeance that confuses, although it makes more sense as the drama deepens. Registering on numerous difficult levels, the space created by the wonderfully detailed wording of Guirgis (Between Riverside and Crazy) overflows with the harshness and difficulty of the modern world. It’s not all warm and fuzzy, this Halfway house.  It’s more convoluted and uncomfortably delivered than some casual sitcom, even when it feels somewhat like a lead-in to a Netflix show like ‘Orange is the New Black‘, which many of the cast herald from. There is the manipulative mother, interestingly named ‘Happy Meal Sonia’, played strongly by Wilemina Olivia-Garcia (Primitive Grace’s QUOTIDIAN) who bursts through the seams of her self, twisting situations and a controlling harness that is tied around the neck of her troubled not-so-young daughter, Tiana, delicately portrayed by a wise Viviana Valeria. And the engaging alcoholic Wanda Wheels, dynamically portrayed by Patice Johnson Chevannes (NYTW’s Run Boy Run & In Old Age) who bonds with great delicacy with the token young teenage boy, Mateo, kindly played by the appealing Sean Carvajal (Signature’s Jesus Hopped the ‘A’ Train) whose presence there feels somewhat forced, even with his need of socks. Chevannes once again finds a humanity in the difficulty of being alive and troubled, delivering a performance that aches with troubled beauty and clarity.

As directed with a fine combed force by LAByrinth Artistic Director, John Ortiz, Halfway Bitches… climbs up the ladder to the righteous place of authenticism, strutting out a modern place and time that needs attention. It’s clearly defined, but not always comfortable to take in, especially if you are not in the mood. There are no easy answers or simple solutions given, and even when, midway through, the piece almost upends itself with a hard-edged stereotypical tragedy centered around the well constructed Bella by Andrea Syglowski (LCT3’s queens) who as a character falters, almost too casually, with the needy help of the somewhat too naive Cruz’s Venus, the play survives. Halfway Bitches… ends on a less overly dramatic note, which is a great compliment to the strength of the piece, leaving us sitting on the curb alongside Sarge, wondering how we will all survive this cruel inhumane world.