He Says: MCC’s Alice by Heart Stumbles On Its Way to Wonderland Awakening 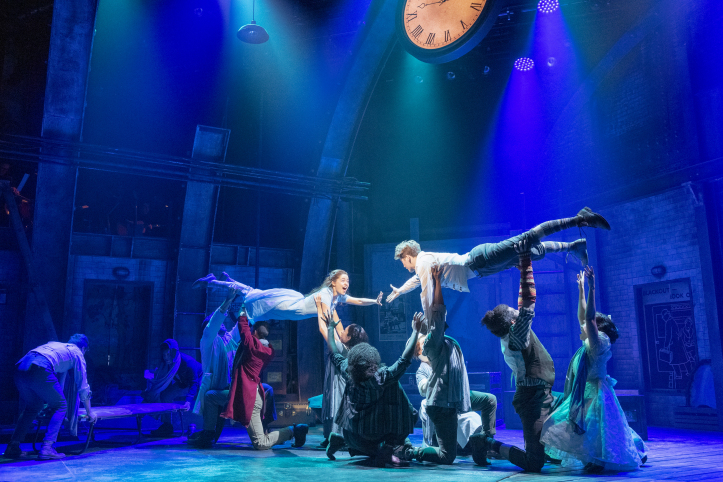 He Says: MCC’s Alice by Heart Stumbles On Its Way to Wonderland Awakening

Rolling into the lovely new Robert W. Wilson MCC Theatre Space, the new musical, Alice by Heart tries desperately to find its footing in the often-mined landscape of Wonderland. Hidden below the pubescent sexually electric surface, is a descent worthy of exploration as directed by Jessie Nelson (“I Am Sam“) who co-wrote the book with lyricist, Steven Sater (A.R.T.’s Prometheus Bound), with an overly complicated but sometimes compelling musical score by Duncan Sheik (Spring Awakening). But bouncing along the haphazard journey is a fascinating concept with a convoluted and discombobulated execution. Straddled somewhere between numerous English coming of age fantasies and the Germanesque Spring Awakening, a gaggle of English children hunker down in a makeshift bomb shelter in an Underground station during the Blitz of WWII London, circa 1941, hoping to find sanctuary and escape in the retelling of this famed tale. Recited by memory, some of them find peace from the danger overhead, while others seem to battle the distraction with brattiness for no apparent reason other than they feel the need to. Which in this misshapen recreation, is a reason worth repeating by all.

The beautifully created safety zone, designed with an intrinsic eye for detail and beauty by Edward Pierce (worldwide Wicked), with spectacularly dynamic lighting by Bradley King (Broadway’s Bernhardt/Hamlet), and lopsided sound by Dan Moses Schreier (Broadway’s The Iceman Cometh), is ruled over by an authoritarian Red Cross nurse, played with stiff polish by Grace McLean (Broadway’s Natasha, Pierre…), who, not surprisingly, manifests herself into the perfectly diabolical Queen of Hearts with an easy spin of her soul. Standing by her side is a dismissive Doctor by the name of Butridge, portrayed solidly by Andrew Kober (Broadway’s School of Rock), naturally becoming the King to her Queen. Forced by the two tyrants to behave, a young wide-eyed Alice Spencer, portrayed earnestly by a gung-ho Molly Gordon (Point Grey Pictures’ “Good Boys“) finds hope and romantic awakening with the arrival of the very handsome young crush, Alfred Hallam, her ‘White Rabbit’ love, played with sweet sickliness by the engaging Colton Ryan (Public’s Girl From…). Finding him quite ill and being labeled as beyond hope, Alice rips away her wrap revealing the iconic blue dress of Alice, courtesy of the magnificent costuming by Paloma Young (Broadway’s Bandstand), and with her Alfred, heads “Down the Hole“. Her Alice is shaky in her delivery but steadfast in her resolve, but Ryan balances her out, adding emotional stability to the bomb rocked space.

It’s not the most subtle of structures, using story-telling as an escape from danger and disease with an added layer of clumsy sexual sentimentality, but it’s also not the more clear-cut creation either. Her precious book is torn apart by the heartless nurse, but with determination, she starts to tell the tale by heart. Her linear thinking is as clear minded as the writers, muddying up the telling with numerous pauses and delays, while Ryan’s White Rabbit keeps reminding her they are all running out of time. The symbolism, once again, is not subtle, nor is this telling that easy to follow or stay engaged with beyond its fascinating visuals.

The cast is game though, and very invigorated by the task at hand. Each one of these kids hiding out in the subway platform from German bombs dons many other Wonderland hats, gloves, and dresses, each given a character from Lewis Carroll’s “Alice’s Adventures in Wonderland” to encapsulate. Heath Saunders (NBC’s ‘Jesus Christ Superstar’) is the first who climbs out and forward as the seductive Caterpillar (also: Angus/Knave of Hearts) singing the engaging “Chillin’ the Regrets” with an assist from Kim Blanck (Public Works’ Twelfth Night) who also thrills with her role of the Cheshire Cat (also: Tabatha). Both are strong and interesting creations, especially when paired with the athletic and inventive choreography of Rick and Jeff Kuperman (A.R.T./New Victory’s The Light Princess). The team’s work is fantastically dynamic and powerful with moves and the balletic pronouncements that are inspired and uplifting. This, along with the incredible Noah Galvin (title character/Broadway’s Dear Evan Hansen) as the Duchess (also: Dodgy/Dodo/Mock Mock Mock Mock Turtle) with the show stopper, “Manage Your Flamingo“. He, and they are each bloody good reasons to follow Alice down the rabbit hole, but sadly, not quite enough of a reason to want to stay.

The damaged young child, Harold Pudding, who also dons the Mad Hatter hat, played with frantic madness by Wesley Taylor (Broadway’s SpongeBob…) is given a perfect vehicle for his manic energy in the exciting “Sick to Death of Alice-ness” performed to perfection with the sleepy Dormouse (also: Nigel/Eaglet/Knave of Clubs), portrayed beautifully by Zachary Infante (NYCC Encores’ Big River) and Ryan’s eclectic White Rabbit. The Mock Mock Mock Turtles’ song “Your Shell of Grief” is also a highlight in terms of invigorating performances by Catherine Ricafort (Broadway’s Allegiance) (also: Clarissa/Canary/Queen of Diamonds), Galvin, and the ensemble, made up of Mia Dilena (Disney’s “The Music Man“), Zachary Downer (Broadway’s Hello, Dolly!), and others.

But as a whole, with music direction and vocal arrangements by Jason Hart (Broadway’s American Psycho), with additional arrangements credited to Simon Hale (Broadway’s Finding Neverland) the bits and pieces fail to add up to anything coherent as they tumble-down the rabbit hole to Wonderland scattering the storyline into fragments.  I was lost, even with the movements and design being so well choreographed with intricate detailing. The talk was in riddles and the direction was all fascinating tableaux with nonsensical side steps, but Dearest Dodo, please explain the importance of the mocking of the mock turtles and who that puffing caterpillar really is. Cause in the end, even with the delightful tea party so well executed, the whole reason for being, beyond that the Key is all me, fails to land safely at the bottom of the Wonderland rabbit hole unscathed.

Suzanna BowlingNovember 19, 2022
Read More
Scroll for more
Tap
PH’s Floats Out If Pretty Hurts Ugly Must Be a Muhfucka
Beto O’Rourke and The Female Vote